THE BEST THINGS IN LIFE CAN BE THE MOST UNEXPECTED 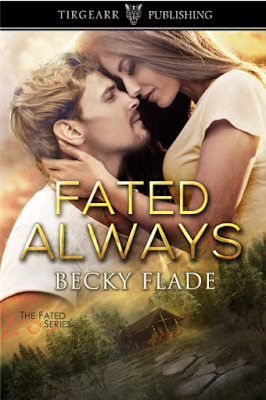 The fourth book in my romantic suspense series set in Trappers’ Cove, FATED ALWAYS, releases on Wednesday August 12th. It was a long, strange journey from book one to here.
You see, I’d never intended to write a series.
A book blogger and reviewer who so loved Fated Souls [book #1] suggested, passionately, that I write a sequel featuring the child of the couple who fell in love despite all odds, including but not limited to, a curse and a madman. And so, I started thinking about it.
What began as a loose idea bout Tala Gael and a drifter with secrets, evolved into Fated Hearts [book #2] and Tala took a back seat as a supporting character: a special child who is referred to by the heroine in that book as a “wood nymph.”
Jenna Gavin “nee McAlister” a supporting presence in both books presented a new challenge. Could I write a story about her, staying true to her often caustic disposition, a heroine who wasn’t easy to like that you could still root for? They do it all the time with heroes, so why not? And so Fated Desires [book #3] was born.
Tala got a chance to be a teenager and readers got to know Jenna’s oldest son and Tala’s best friend, Sawyer.
Finally ready to tell the story that blogger asked for years earlier, I give you:

When her best friend, Sawyer Gavin, roars into town on his motorcycle, Tala Gael thinks life couldn’t get any better. What she couldn’t have anticipated was his appearance heralding a time of change in her quiet, comfortable existence.

With her life turned upside down, Tala resists Sawyer’s advances, clinging to the familiar. Tragedy changes her mind, but as she takes the leap of faith into Sawyer’s arms, they find themselves suspects in a murder investigation. And Tala learns she’s not the only person in Trappers’ Cove keeping an impossible secret.

Jealousy is when you worry someone will take what you have; envy is coveting what someone else has; and both can lead to murder.

Her cabin came into view and anger overrode the fading anxiety. The door sat open and askew, hanging on one hinge. The windows were shattered. She slammed the car into park and leaped from her vehicle. Pottery ground under her heels as she ran up the steps, her planters were overturned, some broken, soil littered the porch and the tender shoots of the flowers she’d planted were crushed like sad soldiers. Her porch swing dripped in red paint.
Her hands, curled into fists, shook, as she moved to the doorway and peered inside, prepared to find more destruction. The word BITCH scrawled in the same red paint across the mirror inside the entry. Trails of crimson dripped down the wall as though her home bled. But the damage inside appeared limited to the defaced mirror.
Bastard must have heard me coming and took off. Took off into the woods. Could be a few yards away, watching, enjoying her reaction to the destruction, the violation, the insult. Her body whirled as she scanned the forest. The brush was too dense, too green, to see much. Even on a bright summer day such as this, the fauna sucked out the light, and the darkness the shadows provided meant Derrick could be right there and she’d never know it. But she’d be visible.
“Come on out and face me, you f**king coward.”
The woods lived, it breathed, even in the barest, coldest, darkest days of winter. On a day like this, it thrived. Hummed with the sounds of life. It was never truly quiet. Today those sounds were muted. Hushed even. But there was no response to her challenge. Tala strode strong, purposeful, unhurried steps to her car. She wasn’t going to run; she wouldn’t be cowed.

About the Author:
When I was little I thought everyone had stories in their head. When I found out that wasn’t true and that only special people had stories to tell, I wanted to be one of the people who shared their stories with the world. I make my own dreams come true, one happily ever after at a time.
I'd love to have you visit with me at any of my virtual homes or write to me directly at beckyfladeauthor@gmail.com
http://tirpub.com/bflade
https://beckyflade.blogspot.com/
https://www.facebook.com/BeckyFlade
https://twitter.com/beckyflade
https://www.instagram.com/beckyflade/
Sign up for my quarterly newsletter & be entered for a chance to win a free book (one winner per month)!  http://eepurl.com/7WDZj
Giveaway ends 11:59pm EST August 11th. Due to GDPR regulations you no longer need to submit your email address in the comments. If you have been selected as a winner your name will be posted at the top of the post. You may then contact maureen@justromanticsuspense.com to claim your prize. Your email address will be shared with the author/publicist providing the giveaway.
Posted by Maureen A. Miller at 12:30:00 AM