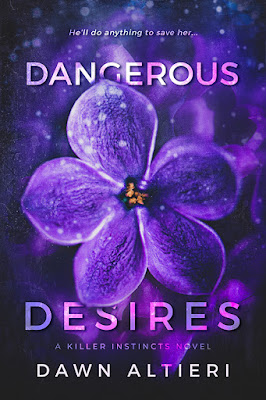 Dangerous Desires is ON SALE for only 99₵!


Emma Sloane is tired of doing what everyone else in her life thinks is best for her. She lost her fiancé in a tragic hit-and-run accident, but after three years of feeling stuck, she decides to take control and go after what she really wants for herself. But her confidence is derailed by what seems like a random attack outside her apartment building.
Detective Jake Quinn doesn’t believe the attack was random at all. He’s assigned to Emma’s case and quickly realizes she is the former fiancée of the victim of a hit-and-run he investigated three years ago, the one case in his career he couldn’t solve. When more women who look just like Emma begin turning up dead, Jake knows Emma is the killer’s ultimate target, and he’ll stop at nothing to keep her safe.
As any writer will tell you, the first draft is never the final draft, and Dangerous Desires was definitely no exception. Roughly eight years, three titles, four editors, and who knows how many rounds of revisions… to call it a long journey would be an understatement, to say the least.
Though I’d been writing on and off for years, Dangerous Desires was the first story I actually completed at a respectable novel length, but it needed a lot of work—and I mean, a LOT. So much that I actually wrote and published my debut novel Burn before I managed to finish Dangerous Desires! Perhaps it was Jake’s unyielding conviction to protect Emma and bring a killer to justice, or Emma’s quiet strength and determination to stand up for herself -- these characters just wouldn’t let me move on until I got them out in the world.
Dangerous Desires was truly a labor of love for me and the characters will always have a special place in my heart. I hope you enjoy reading about them as I enjoyed writing about them!

Here’s a peek at Jake and Emma’s first encounter:
Emma fidgeted in her seat in the local precinct’s small, brightly lit interview room. A clock ticked away the approach to midnight.
Her heart hadn’t stopped racing since she’d all but collapsed into the planter box outside her apartment, and it still showed no sign of slowing down. After giving what little information she could muster to the patrolman who’d responded to her call, she’d been brought to the First Precinct to give a formal statement. She’d faced a parade of officers who all had the same questions. Anyone who’d want to hurt you? Anyone you’ve argued with recently? Anyone who might be holding a grudge?
No, no, and no.
“Ms. Sloane?”
She stood as a light-haired, middle-aged man in a dark suit entered the room and reached out to shake her hand.
“Detective John MacKenzie, homicide division. Call me Mack. My partner, Detective Jake Quinn.”
She turned to the second, much younger detective, and her breath caught as she met his gaze. Electricity shot through her as he took her hand in his. He was tall, at least six foot two since he towered over her five-foot-six frame. His dark unruly hair was a little too long, but sexy as hell.
He gave her a nod of acknowledgment, and a warm blush rose in her cheeks as he examined her with a slow sweep of his ice-blue eyes. She had the strangest feeling she’d met him before. Had she?
Mack took the seat opposite her while his partner leaned against the wall near the door, propped one foot against it, and shoved his fists into the pockets of his jeans. Dark curls peeked over the top button of his white dress shirt, and the fabric strained against the well-defined muscles of his chest.
Wait, did he say homicide? 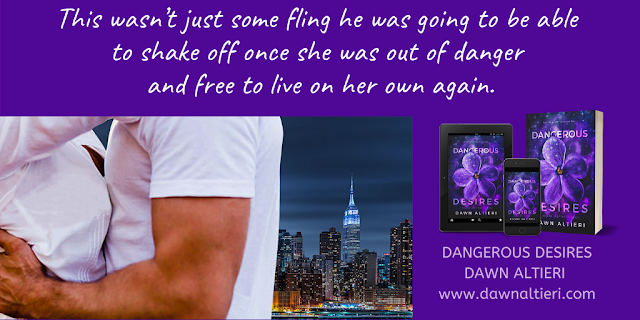 He'll do anything to save her...
Three years after Emma Sloane's wealthy fiance's mysterious death, she's finally ready to move on and pursue her own dreams. But her plans are derailed when she's attacked outside her New York City apartment in what she thinks is a random violent incident. Then other women who look just like her start turning up dead...

Homicide Detective Jake Quinn is haunted by the one case he couldn't solve. When he's put in charge of a new high-profile murder case, he interviews a victim who escaped a similar attack—and to his shock it's Emma, the former fiancée of his unsolved murder victim.

Neither expects the sparks of attraction between them. But the killer escalates, clearly targeting Emma, and Jake's job is on the line. Can he solve this case before it's too late for both of them?

For a limited time, Dangerous Desires is ON SALE for only 99₵!

Giveaway:
One lucky reader who leaves a comment below will win a digital copy of Dangerous Desires!

About Dawn Altieri
A lifelong resident of northern New Jersey, Dawn Altieri has been scribbling stories practically since birth. After reaching a milestone birthday (she won’t say which one), she figured it was about time she took a shot at writing professionally.

With an overactive imagination and a slightly twisted mind, she enjoys reading dark and dangerous tales almost as much as writing them. When she’s not curled up on the sofa with her laptop, her latest story, a box of chocolates and a cup of tea (or a glass of wine, depending on the time of day), she can be found volunteering in the world of animal rescue. To keep a roof over her head, she works in the printing industry as a graphic production artist. She shares her home with her husband and daughter, and a menagerie of rescued fur-babies.

Giveaway ends 11:59pm EST July 23rd. Due to GDPR regulations, you no longer need to submit your email address in the comments. If you have been selected as a winner, your name will be listed at the top of the post. You may then  contact maureen@justromanticsuspense.com to claim your prize.
Your email address will be shared with the author/publicist providing the giveaway.
Posted by Maureen A. Miller at 12:30:00 AM