TRAPPED WITH THE SECRET AGENT 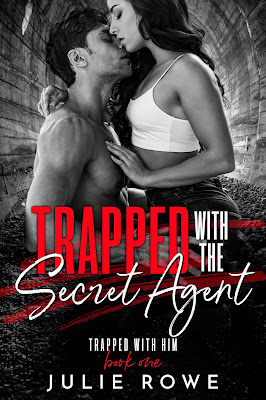 Terrorists have taken over the American embassy in Koutu, a small Middle Eastern country with huge oil reserves. This is not good news for the Ambassador’s claustrophobic personal assistant, Georgia Masters, whose composure is tested when she’s locked in a small dark small storage room by the terrorists. Then her worst fear is realized when they throw a man into the storage room with her.

Burned out CIA agent Peter Welis can’t believe his bad luck. Terrorists take over the US embassy of a small Middle East country while he’s there on a routine visit. Only his cover as a photojournalist saves him from being immediately killed. Then he’s locked up in the basement with the Ambassador’s claustrophobic secretary. So what if she’s bravely trying really hard not to lose her cool. Nothing worse could possibly happen, right? Wrong. After escaping the storage room, he and Georgia discover a crate on the floor covered with Russian printing. It contains a nuclear warhead. Peter is now duty bound to find out the terrorists’ true intentions and stop them any way he can.

As they escape the embassy and search for help, hope, and rescue, Georgia struggles not to fall for the secret agent who’s the first to tell her he’s a bad bet.

Giveaway:
Help me celebrate the release of TRAPPED WITH THE SECRET AGENT! You could win a $10 Amazon gift card.