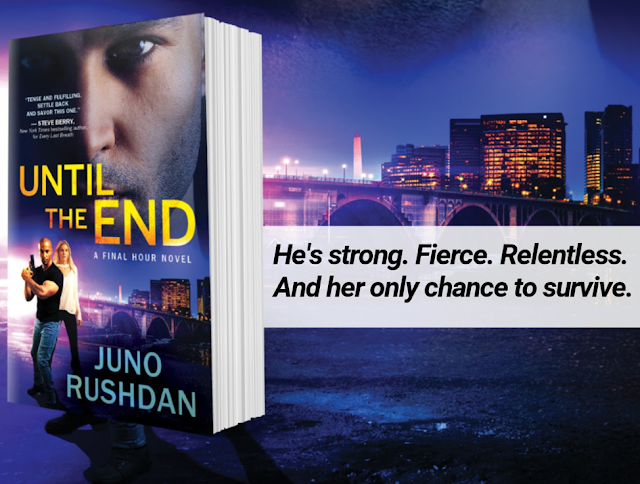 I do a lot of intensive research for each romantic thriller that I write, from weaponry, combat moves, to locations. Most of which I generally do online. However, for UNTIL THE END, the third book in my Final Hour series, I chose a location for the second and third chapters of the book that was only a forty-minute drive away.
Since I’m a mom of a six and seven-year-old, I try to spend as much time with my family as possible, but writing is solitary process, where I’m locked away in a room. I decided to scout the location first-hand and make it a family outing. My husband and I got the kids in the car and drove down to Washington, DC.
Walking around the Upper and Lower Senate Park turned out to be the best idea. One of my concerns for the scene I had envisioned was how does Castle and his team have a shoot-out in this park when it’s right across the street from the Capitol building and not draw a ton of police attention. I didn’t want to change the location because Kit, my smart heroine, deliberately picked that site for that very reason. She wanted someplace she’d feel safe with easy access to police.
Believe it or not, even when you use a suppressor on a gun, it still makes a distinctive sound. I needed a natural fix for my problem. Fortunately, I stumbled across the solution because I actually went to the park. There’s a huge bell tower right next to it. The bells are very loud and peal frequently. Loud enough in fact to mask the sound of suppressed gunfire. Since neither team, Castle’s nor the enemy’s, wants to draw attention, it was in both their interests to work with the environment.
Being in DC also gave me the opportunity to figure out Castle’s favorite cookie. He’s a big cookie-lover, as are my kids, imagine that. So we sampled the very best the city had to offer. By unanimous vote, Olivia Macarons won by a landslide! These are hands down the best macarons you will ever try and possibly the best cookies ever. The macarons definitely made it into the book.
If you’re new to the Final Hour world, you can download the series starter NO WAY OUT for FREE when you sign up for my newsletter.
"In this pulse-pounding, military-heavy romance, Rushdan's well-crafted characters jump off the page and will captivate lovers of romantic thrillers." - Library Journal 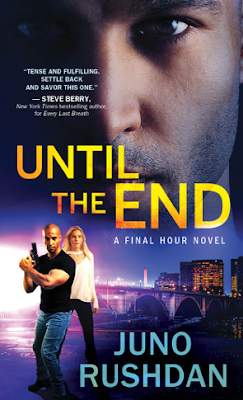 UNTIL THE END
He's strong. Fierce. Relentless. And her only chance to survive.

Castle Kinkade's allegiance is tested when he protects hacker Kit Westcott. Trapped in the closest of quarters, the ice surrounding his heart melts and he finds he'll do anything to protect Kit. Castle is the last person Kit should trust, let alone be attracted to, but under threat of imminent attack, they're forced to put their hearts and lives on the line to stop the greatest danger the world has ever known.

“Action, heat, and a strong cast. Readers will enjoy the ride!” -Publishers Weekly

ABOUT THE AUTHOR
Juno is the award-winning author of the action-packed romantic thriller series the Final Hour from Sourcebooks Casablanca and the new Hard Core Justice series from Harlequin Intrigue. She writes about kick-ass heroes and strong heroines fighting for their lives as well as their happily-ever-after. As a veteran Air Force intelligence officer, she uses her background supporting special forces to craft realistic stories that make you sweat and swoon. Juno currently lives in the DC area with her patient husband, two rambunctious kids, and a spoiled rescue dog. Be the first to know about new releases, exclusive excerpts, and contests by signing up for Juno’s free newsletter at junorushdan.com/mailing-list/. Also be sure to follow Juno on Facebook, http://bit.ly/JunoFB, and BookBub for the latest on sales at bit.ly/BookBubJuno.

Check out the giveaway on the JUST ROMANTIC SUSPENSE Showcase!