Giveaway of a $5 gift card! 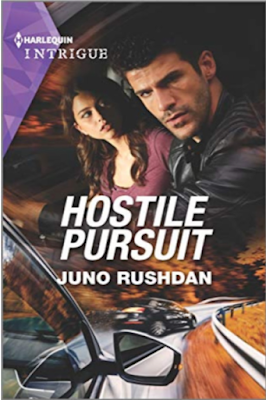 Hi! I’m Juno Rushdan and thrilled to be here! As a veteran intelligence officer, I use my real-world background supporting special forces to write romantic thrillers with high-octane action, a propulsive storyline, a romance with a ton of heart. My books are for fearless romantics.
The first book in my new Hard Core Justice Thriller series, HOSTILE PURSUIT, just came out!

When ruthless killers target them, even a safe house isn’t safe. Only twenty-four hours remain until marshal Nick McKenna’s informant, Lori Carpenter, will testify against a powerful drug cartel. Nick has kept her safe for an entire year, but now all hell is breaking loose. With a team of cold-blooded assassins closing in, the by-the-book lawman decides to go rogue. He’ll risk his life for duty…and put it all on the line for his irresistible witness.
Nick is a slightly flawed hero who learns that by embracing something in his past he’s ashamed of, it can become a strength that will help him survive. Lori is a heroine hiding a terrible secret. She’s loving, kind, vulnerable, and only grows stronger with every difficulty that she faces.
I not only fell in love with Nick and Lori while writing this, but also the villain. Belladonna is innovative, wicked-smart, and won’t let anything stand in her way.

Here’s what readers are saying:
“This edge of your seat romantic thriller had me hooked from the beginning and didn't let up until the sizzling conclusion.” -David, Goodreads, 5 Stars
“A suspenseful, jam-packed read!! I couldn’t put the book down because I wanted to know what would happen next-and it was a lot!”-Jewels Book Blog, Goodreads, 5 Stars
“What a wild ride Hostile Pursuit was from the first page to the last!”-Katie, Goodreads, 5 Stars 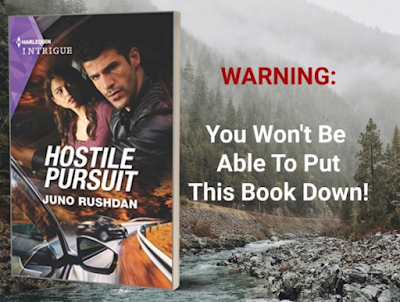 EXCERPT
Nick looked back in the quiet clothing store, checking on things.

Ted no longer stood stationed at the entrance of the dressing rooms, where he was supposed to be.

Nick touched his Bluetooth earpiece. “Ted? What’s your position? Do you have eyes on Hummingbird?” he asked, using the codename for Lori.

Deafening silence. His pulse spiked, but he remained calm—never one to succumb to panic. He stepped past displays and racks, his gaze scanning, his mind assessing. No sign of Ted. Or the sales associate.

Drawing his gun, Nick hustled toward the dressing rooms.

Anticipation coiled in his chest, adrenaline roaring through him. The weight of his backup piece strapped to his ankle was a small comfort. Nick’s fingers tightened on his Glock. He reached the threshold, scanned left, then right.

Ted lay on the floor beyond the entrance in a corner. Blood soaked his white hair at the base of his skull. Son of a— Ted was down.

There was no time to check if his partner was unconscious or dead. A commotion deeper in the dressing room drew him forward. Two people struggled inside the second stall.

The horror in Lori’s terrified whimper jolted his heart.

About the Author
Juno is the award-winning author of steamy, action-packed romantic thrillers that keep you on the edge of your seat. She writes about kick-ass heroes and strong heroines fighting for their lives as well as their happily-ever-after. As a veteran Air Force Intelligence Officer, she uses her background supporting special forces to craft realistic stories that make you sweat and swoon. Juno currently lives in the DC area with her patient husband, two rambunctious kids, and a spoiled rescue dog. To receive a FREE book from Juno, sign up for her newsletter at junorushdan.com/mailing-list/. Also be sure to follow Juno on BookBub for the latest on sales at bit.ly/BookBubJuno.

Visit the JRS SHOWCASE for more giveaways!
Posted by Maureen A. Miller at 12:30:00 AM