I’m so excited to return to Just Romantic Suspense to announce the continuation of the Blood Secrets saga with the release of Inherent Lies, Blood Secrets Book 2. As if Inherent Truth wasn’t twisted enough, book 2 delves even deeper into the secrets that underpin the very fabric of Liv Sullivan’s existence. Liv and Ridge’s story plays out with a hallmark stamp of revenge as secrets and lies continue to unravel. 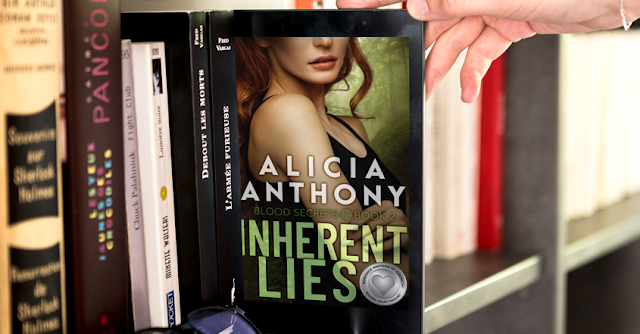 Of course, book 2 holds a special place in my heart. Why? It opens in Liv’s ancestral home of Ireland, of course! And to make it even better, it’s peppered with personality in the form of some new characters inspired by that fair isle. 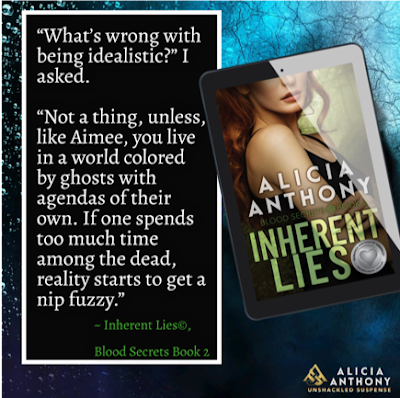 Eccentric psychotherapist, Herman Mayhew, makes his first appearance in Inherent Lies as Liv’s mentor and friend. Playing cards with dead writers, Oscar Wilde specifically, is one of his favorite past-times, as is riddling his way under Liv’s skin, as he does in this snippet:

But Liv’s not the only one with a few new friends. Ridge’s sister, Skylar, makes her debut in Inherent Lies, and their typical sibling relationship takes Ridge’s indignant ways down as notch.

As she does here:

Of course, it wouldn’t be a sequel without the chance to explore the scars of some of our favorites a little more deeply.

Now, without further ado, I sit a spell and enjoy this snippet of Ridge’s attempt to return to Liv’s life in Inherent Lies, Blood Secrets Book 2:

The thumping music drowned out any rational thought Ridge might have had as he looked across Cohen's pub toward Liv. It also effectively muted the intense conversation she was having with Ashlyn, a fact that raised his level of irritation with every percussive whack of the bodhrán.
Every time she smiled that perfect smile at the waiter a little piece of his sanity vanished. Lucky for him, the conversation she was having with Ashlyn put an end to the polite smiles. Their past rushed at him. The music of her laughter. The silkiness of her skin. The memory of her lips on his. So much time had passed. He’d been too stupid. Waited too long. Hurt her too deeply.
The last night he’d seen her was eight months ago. A 911 call from Liv’s cell at Sullivan Farm lured him there. He could still picture the shock in her eyes when he found her on the stairs in the barn. He’d heard the shot. Knew he’d find Abbott with a bullet in his skull. But the truth of Liv’s involvement came out later. Much too late to apologize for trying to protect himself from the pain of her loss. Even now he had trouble rationalizing his own stupidity.
Ridge turned his attention to the pint glass in front of him, twisting it in a circle between his thumb and middle finger. He’d treated her like a criminal that night. Had left her to fend for herself as she fought to clear her name. You were following orders, he reminded himself, scrubbing a hand over his face. He might as well have that mantra tattooed to his arm for as often as he needed the reminder.
What are you doing here? He could answer that question, not with any convincing argument, but he could provide an answer. He imagined that's what Liv would ask when he finally summoned the courage to approach her. Part of him preferred lurking in the shadows, providing protection from afar.
Motion from Liv's side of the pub distracted him. She was leaving. Auburn curls hung in ringlets down the back of her green sweater. Her jeans hugged her thighs. The curve of her hips sending a spike of heat through his core. She looked good, even better than he remembered. Jesus, McCaffrey, pull yourself together.
He tossed a twenty Euro bill onto the table and tried to act as if he belonged, weaving his way toward the exit that led to the rooms above the pub. He'd scoped them out before she'd arrived. And he knew exactly which one was hers, room 211, on the left-hand side of the narrow hall. He’d even found the sitting area at the end of the hall from where one of the photos found in Garrison’s apartment had been taken. It was too close for comfort.
Liv was already at the door when he got to the top of the stairs. It wasn't until then that the reality of the situation crashed in on him. Here he was, a man she hadn't seen in more than half a year, one that should be three thousand miles away, suddenly approaching her from behind in a dark hallway. Nice. That’s one way to get yourself tased–or shot.
He was almost close enough to touch her when her hand paused on the handle of the door. She froze, her gaze still on the key in the lock in front of her. But her respirations increased, her chest rising and falling with each gulp of air.
“What are you doing here?”
Her voice was almost a whisper. If Ridge hadn't been so intently focused on her, he might have missed it. He swallowed hard, scanning the empty hall around them, wishing he had a better explanation. Jumping on a plane under the guise of protection for a woman he'd purposefully avoided when she needed him most suddenly took on a fresh air of idiocy.
“I was worried about you.” Faced with Liv just feet in front of him, it was the best he could do.
She turned to face him. Her complexion was paler than he'd remembered, but those eyes, they were still just as green, and right now they were piercing him to the core. He took a step back.
“You lost the right to worry about me a long time ago, Ridge. Now, if you'll excuse me, it's late and I have work to do.”

~~~
Meet the Author:
Alicia Anthony’s first novels were illegible scribbles on the back of her truck driver father’s logbook trip tickets. Having graduated from scribbles to laptop, she now pens novels of psychological suspense in the quiet of the wee morning hours. A full-time elementary school Literacy Specialist, Alicia hopes to pass on her passion for books and writing to the students she teaches. Her works of fiction have been nominated for numerous awards, including the Golden Heart®, Claymore, and Daphne DuMaurier Award for Mystery/Suspense. The second installment of the Blood Secrets Saga, Inherent Lies, was a 2018 Silver Quill Award winner. Alicia finds her inspiration in exploring the dark, dusty corners of the human experience.

GIVEAWAY TERMS and CONDITIONS:  Open to US shipping addresses only. One winner will receive a paperback copy of Inherent Truth by Alicia Anthony. This giveaway is administered by Pure Textuality PR on behalf of Alicia Anthony. Giveaway ends 4/30/2020 @ 11:59pm EST.