Congratulations to "Patricia B.", the winner in Jodi's giveaway. 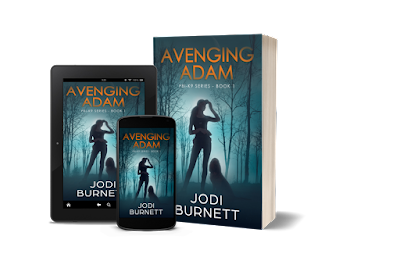 Hello, to you Suspense and Thriller readers! My name is Jodi Burnett and I am the author of Avenging Adam which is an FBI-K9 Thriller – first in a series - that was just released TODAY!

In doing research for Avenging Adam, and the full FBI-K9 series, I had the opportunity and the honor to interview Officer J. Villalva about his work as a K9 police officer. Officer Villalva and his partner, a Belgian Malinois named “Miner” protect the streets in Greenwood Village, Colorado. Johnnie Villalva is a former MP in the United States Marine Corps and has brought his desire to protect and serve home after his military service.

I sent the same list of questions to a retired FBI-K9 and HRT (Hostage Recovery Team) Agent who would like to remain anonymous but who was part of the K9 team that worked in Boston during the Marathon bombing incident. We are more than fortunate to have men and women like these and their K9 partners working to keep us safe.
Here’s what they had to say about their work:

Jodi:  Do all major Police Departments have K9 Units attached to them?

Officer Villalva:  Yes, if they have the budget for it. Smaller departments can call for K9 assistance from larger departments if they need it.

FBI Agent: In the FBI, only HRT has multi-purpose (apprehension and explosives detection) dogs. Some FBI field offices have narcotics or electronics detection dogs, or search dogs. Most large police departments and many smaller departments have K9 assets.

Jodi: Where do you get the dogs and what do you look for in a dog when you’re choosing?

Officer Villalva: There are several canine vendors in the United States where we can go for dogs. I got Miner in Utah, but he originally came from Czechia. We evaluate the dogs for pack drive, play drive, search and hunt drive, the drive to fight, and courage.
FBI Agent: Most of the HRT dogs are obtained from working dog breeders in Germany, Holland, Slovakia, or other European countries.

Jodi: How much say do you get in the selection of your K9 partner?

Officer Villalva: After the dog passes the overall criteria, I have the final say.
FBI Agent: Very little.

Jodi: What type of dog is Miner?

Officer Villalva: My dog, Miner, is a Belgian Malinois. They are smaller, more compact, and have fewer hip issues than German Shepherds. Miner originally cost the department $10,000.

Jodi: Where does your dog live and what does his care involve?

Officer Villalva: Miner lives at home with me. He has a specially designed kennel that is both heated and air-conditioned. He eats frozen, raw meat – no fillers. The diet helps prevent him getting a flipped stomach. Miner sees the veterinarian on a regular basis for his check-ups and goes to work with me every day.

Jodi: How much training does a dog have when he comes to the unit?

Officer Villalva: Miner had none, I got him when he was only 6 months old.
FBI Agent: Most of the dogs have training in one of the dog sports such as Schutzhund, IPO, or KNPV when they arrive. (Bite work, tracking, and obedience)

Jodi: Where do you train? Is there a special facility?

Officer Villalva: Training happens constantly, but we have two, ten-hour training days per month. There is no training facility. We train anywhere and everywhere. We have to mix it up. We can’t keep going to the same place because the dogs are too smart. We go to fields, alleys, old and new buildings, etc. During slow hours on the job we train and practice searching and hunting in the dark. We take five minutes of training whenever we can get it.

FBI Agent: FBI-HRT dogs train at the HRT training facility at the FBI Academy at Quantico, VA. There are firing ranges, shooting houses, obstacle courses, and a mock city at the Academy. They also train at different training facilities of other law enforcement and military agencies, and professional dog trainers.

Jodi: How much time during a normal week do you spend training?

FBI Agent: When the K9s were not on operations, working days that didn’t concentrate on other operator skills were K9 training days. This was 2-3 days/week on average. 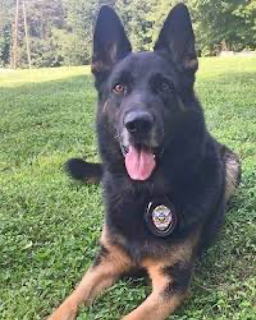 FBI Agent: There really weren’t ‘typical’ days. The K9s could be involved in training ranging from tactical obedience, fast-roping or rappelling, bite work, detection, trailing, building and vehicle searches, maritime operations, cold weather training, manhunt operations, helicopter operations, etc. The K9s did everything the rest of the Team did, with the exception of Scuba diving.

Jodi: What training reward do you use?

Officer Villalva: Miner is motivated by play and his toy.
FBI Agent: Play with a tug, or a tennis ball for detection.

Jodi: Do you work exclusively in the K9 Unit, or do you have other duties in the department?

Officer Villalva: I work a regular duty only I do it with my K9. There are some duties specific to K9 too. Miner is great at sniffing out drugs. Dogs can sort odors, so we train them with a cocktail of drug scents and then he can find any one of them individually.

FBI Agent: HRT K9 handlers’ main responsibility is the care, training, and deployment of their assigned K9. They also have to maintain their other operator skills and tradecraft. HRT K9s are assigned to the HRT unit with other support assets such as medical, mobility, and breachers.

Jodi: Do you use German or English commands? Or another language?

Officer Villalva: Often it’s Dutch, but the commands are mixed up and I might use unusual words for a command too so I’m the only one commanding my dog.
FBI Agent: HRT dogs have had Dutch, Czech, and German commands.

Jodi: What do you do on your job if your dog is sick or injured?

Jodi: How old is a dog when he retires?

Officer Villalva: Health, not age, determines retirement. The dogs go through an audit to check their obedience, gunfire response, bite and release, and recall — will he call off when biting or sent to search building, car, or area.

Jodi: What happens to the dogs if they are hurt or retire and can no longer work? Do officers get to keep them?

Officer Villalva: Yes, we keep them. But they are technically government property, so we have to buy them for one dollar.

Jodi: Tell me about your most memorable moment on the job with a K9 partner.

FBI Agent: We were part of the arrest team of the Boston Bomber.

Thank you to Officer Villalva, Miner, the FBI-K9 and HRT and all K9 teams that work hard to catch the criminals and keep us safe!

I hope you’ll read Avenging Adam and see how I used this information in my book. I hope you have learned something new and interesting. Comment on this blog for a chance to win a free e-book copy of Avenging Adam. Have a great day! 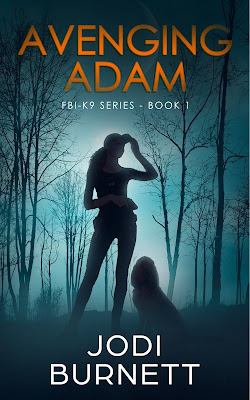 While hiking in the foothills of the Rocky Mountains, FBI Special Agent Kendra Dean and her K9 partner, Baxter, stumble upon a dead body stashed in the woods. The discovery changes both of their lives forever.

Special Agent Rick Sanchez hunts a serial murderer who is targeting women on a multi-state killing spree. Kendra Dean, an agent Rick met on a joint mission six months ago, has found the most recent victim. Rick and Kendra once shared a tempting chemistry but time and miles made their spark a distant memory.

Now, thrust together to solve a deadly case, Rick and Kendra rekindle their attraction only to find their personal demons are even greater obstacles than their geography. It’s hard for Kendra to see around the chip she carries on her shoulder as she works to prove herself in a man’s world. Rick harbors a debilitating guilt over a past failure that holds his heart prisoner and he’s terrified to love again.


The serial killer sets his sights on Kendra. With her life in the balance, she and Rick must deal with their issues. Will they be able to admit their feelings and embrace their growing intimacy before it’s too late?

Author Bio
Jodi Burnett is a Colorado native. She loves writing Romantic Thrillers from her small ranch southeast of Denver where she also enjoys her horses, complains about her cows, and writes to create a home for her imaginings. Inspired by life in the country, Jodi fosters her creative side by writing, watercolor painting, quilting, and crafting stained-glass. She is a member of Sisters In Crime, Romance Writers of America, and Rocky Mountain Fiction Writers.