The Phoenix Agency is Back!


Long ago, when I was first making my mark as a writer in a very small way, and when Ellora’s Cave was a thriving force to be reckoned with, I was fortunate enough to be contracted by them. After several successful titles, I was told they were creating a new imprint, The Lotus Circle, built around a fictional ancient group of women with psychic abilities, and would I write a story for them. Would I? Holy crow! Of course! I knew absolutely NOTHING about anything psychic, but I am a research addict and so I dug in. I decided that telepathy would be the ability I used because I saw so many possibilities. This was right around the time I met a former member of Delta Force and was intrigued by him.

And so ALWAYS ON MY MIND was born, the story of a romance writer and a Delta Force team leader who had known each other since high school. But she was determined to succeed as a writer, and he felt he had to give everything to Delta. That there was no room for a relationship. They had a few rare weekends together but that was it.

Until the night she was sitting at her computer, and she was startled to hear his voice in her head. His mission to capture terrorists had been blown, and he was a prisoner in the jungles of Peru. No one knew he was alive, much less where he was. She was his only connection with the outside world. Her search for help led her to a mysterious security agency that had only a telephone number, but they were her last and only hope.

And so The Phoenix Agency was born.

The first book gave birth to five more. When EC closed the doors on The Lotus Circle imprint, they asked me to retitle and “heat up” the books, which I did. And thanks to you, my wonderful, wonderful readers, you have continued to be hungry for more of these heroic men and their wives with psychic talents. I subsequently wrote a sixth one, but then five years passed. While you all kept asking me when the next one would happen, I guess I was waiting for the right story to hit me.

We had quite a run in Kindle World before they closed the doors, and I was fortunate to have many talented authors write in that series. But now Phoenix is back! The plot I needed smacked me in the brain, I have eight talented authors writing for the relaunch, and February 28 is the big day, for UNEXPECTED RISK and several other all-new stories.

Get ready by joining he Phoenix Agency Universe Readers Group because here it comes!

On launch day we will have lots of contests and prizes, including a Phoenix Agency logo you can download.

They served their country in every branch of the military – Army Delta Force, SEALs, Air Force, Marines. We are pilots, snipers, medics – whatever the job calls for. And now as private citizens they serve in other capacities, as private contractors training security for defense contractors, as black ops eradicating drug dealers, as trained operatives ferreting out traitors. With the women in their lives who each have a unique psychic ability, they are a force to be reckoned with. Risen from the ashes of war, they continue to fight the battle on all fronts. They are Phoenix. 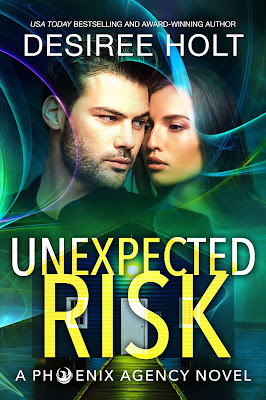 Her so-called gift put her in perilous situations…

Janet Rodman barely controlled her psi ability as an empath to teach school and hang with a few friends. She never knew when a wave of unsuitable emotions from others would assault her. She had learned to build walls to live her life but evil could break them down. A job as a private tutor kept her safe from assault…or so she thought.

He wasn’t looking for a woman in his life…

Former Marine and top tier attorney J. T. Fitzpatrick A bitter divorce took care of that. But when his friends at The Phoenix Agency called on his help to rescue a woman in danger, how could he say no? He’s unprepared for the instant attraction to Janet rodman, but he’s not looking for a relationship and tis is supposed to be a strictly business deal.

His plan is working perfectly, and the bodies are piling up. He can’t let Janet Rodman screw them up. But when she disappears, he pulls out all stops to find and eliminate her. And he’ll kill anyone who gets in the way. With the chemistry exploding between them, can the former Marine keep Janet safe and destroy the killer before he destroys them?

Excerpt:
“This guy is like a phantom.”
Dan nodded. “That’s what Brian called him, although he also called him Darkman. It feels like that’s exactly what he is. He comes and goes in the darkness. No one ever sees him, and he leaves no trace. There’s no rhyme or reason for any of these deaths. And one other thing.”
Dan lifted an eyebrow. “Yeah? What’s that?”
“In each case that we know about, he took a souvenir. A piece of jewelry that a friend or family member says the victim always wore, even to bed. A watch. A ring. An identification bracelet. So it’s absence was picked up on right away by whoever made the formal identification.” He shook his head. “It prolongs the sensation of the crime, validates what he or she has done.”
“Sick.” J. T. lifted his water glass and took a healthy swallow as if washing a bitter taste from his mouth. ‘And you think there might be more?”
“I haven’t had time yet to do a search and Brian’s tied up with another disaster. Plus, his boss said he should ask Interpol to do the looking.”
“I imagine he’s not too happy with that.”
Dan shook his head. “The local police only want the FBI sticking their noses in if it can be proved this is part of a national crime spree. His boss says let Interpol come back to them with more international information before Brian starts wasting everyone’s time on unrelated events. They’re already swamped as it is.“
“So I’m guessing this is how you got involved.”
Dan nodded. “I owe him a big favor he did for one of or clients. I talked to my partners and they all agreed I should at least give it a shot. Hence, the trip to Tampa. I’m headed to meet Brian in the coroner’s office after this.”
“I’m also guessing it was a no-brainer,” J.T. said,” because no one was getting anywhere with this. It has to be a political hot potato, and that, apparently, is right up your alley.”
“True that.” Dan nodded. “And if there turn out to be more international incidents, the fact that we operate well in the dark is a big plus.” He paused. “And one more thing. This is very sensitive and actually makes me sick to think of it. Brian and the detective in Colorado think the killer may be former military. The planning of the mission, the precision of killing all speak to some military training.”
“God damn it.” J. T. smacked his hand on the desk. “What is it with the people who always want to blame the military.”
“For some it’s an easy answer.” Dan   rubbed his jaw. “In this case they may be right. Every kill smacks of someone trained to handle a knife in combat and swiftly and cleanly kill the enemy. I think that’s another reason Phoenix was brought in. The military angle. Someone probably thought I’d recognize the technique. Or whatever.””
“Fuck.” J. T. swallowed his anger. That wouldn’t get them anywhere. “Did you manage to find anything yet as far as Cote’s death is concerned?”
Dan shook his head. “Nada. I spent the entire day yesterday going over his home office, where the body was found, as well as the house itself and his office at the foundation. I had his desktop computer and his tablet and phone shipped overnight to Andy. We’ll see if he finds anything buried in there. Then this morning I was at the morgue checking the body. I know the local cops and the FBI went over it with a microscope, but another pair of eyes never hurts. I’m telling you, J.T., it’s a big fucking mystery. As if some supernatural being blew in like smoke and drifted out again.”
J.T. lifted an eyebrow. “I know your wives all have psychic abilities, and Phoenix uses them when they fit the situation, but this is a little off-the-wall even for you.”
Dan rubbed his forehead. “No kidding. But it’s driving me nuts. This is fourteen such murders in four years. They’re all over the place, different cities, different countries. I still believe Andy can find a pattern.”