I'm so excited to welcome you into the sensual, dangerous world of my new romantic suspense series, The Hellbound Brotherhood! The first two books, Hellion and Headlong, are linked, having the same hero and heroine, which is why I arranged for them to come out in such quick succession. I knew as a reader I wouldn't want to wait too long to know what happened! Hellion takes place when Demi is 22, and Eric 24, while Headlong picks up their tale of passion and danger seven years later. It's a new departure for me, and I didn't intend to do it. I wrote book 2 first, and then I started thinking about how intrigued I was with Eric and Demi's backstory, and then I thought, why not write a quickie little prequel as a bonus content thing? Hah! I should have known better, knowing myself, because my quickie little prequel swelled into an actual book of its own. Typical.

Anyhow, I hope that you enjoy Eric and Demi's story, and that you're primed for Anton, Nate and Mace by the end of it! Because I personally can't wait to get to know the rest of those guys! 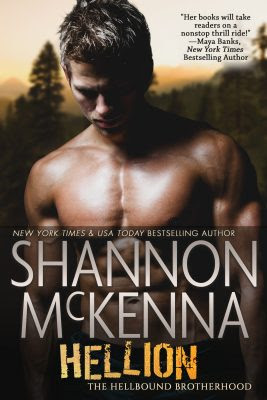 He’s a ticking bomb…Eric Trask is counting the days before he blasts out of Shaw’s Crossing forever. He and his brothers were raised at GodsAcre, a mysterious doomsday cult deep in the mountains, and are the only survivors of the deadly fire that destroyed it. The townspeople see them as time bombs just waiting to blow, but Eric’s going to prove those bastards wrong. He’s an ex-Marine, fresh off a tour in Afghanistan, working three jobs and barely sleeping. Utterly unprepared for Demi Vaughan’s dazzling green eyes, lush pink lips and sexy curves. She’s the town princess…he’s a dangerous outcast. It was a sure recipe for disaster.But the closer he gets to Demi, the more impossible it is to resist…Forbidden fruit is the sweetest…Demi Vaughan has big plans for life post- college, and Eric Trask, notorious bad boy with a complicated past, is not part of them. So when he saunters into the sandwich shop where she works she tells herself he’s just tall, ripped, smoldering eye candy, nothing more. Eric was damaged. Marked by violence and tragedy. He’d be the ultimate bad boyfriend, and right now she was too busy even to shop for a good one. But his hot eyes and hard body, his sensual smile and that rough, sexy voice of his shook her resolve. After all, she was leaving this place forever. A little taste of heaven…what could it hurt?But Shaw’s Crossing has deeper, darker secrets than Eric or Demi could guess. The evil that destroyed GodsAcre is lying in wait...and it will stop at nothing to keep Eric and Demi apart…AUTHOR’S NOTE: Hellion, Book One, ends on a cliffhanger, but it leads right into HEADLONG, Book Two, Demi and Eric’s continuing story, dated seven years later and available for preorder now! The other titles in The Hellbound Brotherhood are a connected series, but each book features its own couple and has its own HEA.

Eric leaped in after her. After a few moments of being swooped and tossed in the center of the current, he got her back to the side of the river again, trapping her between himself and a sheer, towering expanse of rock.
He held her there, immobile. Water swirled and churned around them. “I’m sorry, okay?” he said. “I’ve gotten that before. Girls who want to feel wild, piss off their parents, make their boyfriends jealous. I just wondered if that was what was going on here.”
She shoved at his chest, but couldn’t break his grip this time. “It appears that nothing is going on here,” she said. “Let go of me. Right now.”
“In this current? That’s nuts. I can’t. It’s not safe.”
“I don’t need safe. And I don’t need to walk on the wild side, either,” she said. “I can find my way to the wild side all by myself. I am dangerous as all shit. With no help from you. I do not need to live anything vicariously through you. Got it?”
“Loud and clear.”
They just studied each other fiercely, as if trying to see inside the other’s head.
“You said you’re here because you like me,” he said.
“Liked,” she snapped. “Liked is the operative word.”
“Ah.” He considered that for a moment. “What if I said I was sorry again? Would you like me again?”
“Depends,” she said. “Some guys apologize better than others.”
“What if I apologized like this?” He yanked her closer.
He covered her mouth with his, and Demi had just a moment of disorientation, an instant of who-the-fuck-does-this-guy-think-he-is, her hands up against his chest to shove him away…and then she felt it.
A flash, blazing through her. A rush of wild energy uncoiling in her body. Heat. Light, bursting behind her eyes. A throb of startled yearning way down low.
She was motionless, astonished. Feeling it take her, fill her. His lips were so soft. It was cold in that water, but not the sweet heat of his mouth.
So hot. Oh God.
Heat flared in her mouth, her chest, her belly, between her legs. Flowering and spreading everywhere. She pulled back, gasping for air. The swirl of water sucked hard at her legs. Eric was as steady as an oak.
He kept her close, legs apart, braced around hers. “You’re not the only one who likes it wild,” he murmured into her ear. 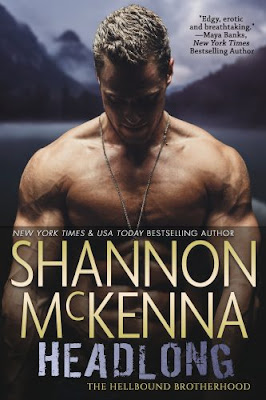 Only one woman could tempt him to return…Eric Trask and his brothers have turned their backs on their past. Only their beloved foster father’s funeral could drag them back to the small town of Shaw’s Crossing. Eric is haunted by the memory of GodsAcre, the doomsday cult in the mountains where they were raised and the deadly fire that destroyed it, but one memory still shines bright…Demi Vaughan. Her lush, sexy mouth, her stunning green eyes. Their hot fling seven years ago crashed and burned in the worst possible way, and she’s still mortally pissed at him…and more gorgeous than ever.Second chances…Demi Vaughan did her best to forget Eric Trask. They told her from the start that he was a train wreck, and she hadn’t listened. He’d broken her heart and derailed her life, and she’d be damned if she’d let him do it again, now that she’d followed her dream and opened her own restaurant. But the years that passed have only turned Eric into a more concentrated version of what he’d always been—a flint-eyed, brutally ambitious, hyper-focused alpha male hunk. Just taller. Harder. As intoxicating as hell.Demi tries to withstand Eric’s magnetic pull, but she can’t resist the all-consuming heat between them. But an old evil still lies low in Shaw’s Crossing, and Eric’s arrival has shocked it back into life.Now it’s not just their hearts that are in danger. It’s their lives…

The closer she got to Eric, the more the hot vital energy emanating from him blotted out everything else.
Eric Trask made her restaurant look so much smaller. His size, his grace, that controlled, subtly predatory vibe. He seemed out of place. Too powerful and charged with energy for his environment. A sleek panther prowling through a henhouse.
He’d always been gorgeous. He’d been stunning in high school, and he’d been even more stunning seven years ago when he was twenty-four.
Now he was all that, but times ten. Leaner. Honed. The crinkles in the corners of his eyes were deeper, as were the sexy grooves carved around his mouth.
Eric seemed even taller than she remembered. His thick, dark blond hair was shorter, sleeker. No longer the shaggy, grown-out buzz cut she remembered.
Too bad she hadn’t caught up a little in the height department. He was a head taller than…no, a head and probably some neck. Her eyes were on level with his collarbone.
Sometimes it sucked to be short.
His shoulders were massive. The shape of his powerful thighs made his suit pants look incredibly good. The elegant suit fit him perfectly. She could spot a costly, well-cut suit from a distance, but it was the lithe, hard body inside that made the magic happen.
His bright, silvery gray eyes burned into hers. She held herself as tall as she could, which wasn’t very, and refused to allow herself to look away. Dad was hissing something unpleasant behind her, but she couldn’t be bothered to understand him.
No one could expect her to. Not while walking straight into the force field of seething sexual readiness that had always surrounded Eric Trask.
She’d gotten off on that dangerous vibe back in her wild and foolish youth. Not anymore. Eric Trask had put a huge dent in her life. She’d learned her lesson well.
No one, but no one, would ever fuck her over like that again.