Are you a Nature Lover? 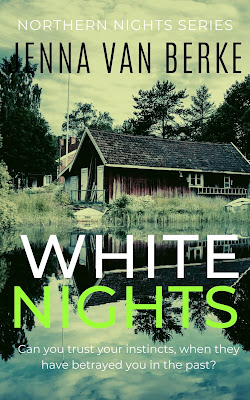 I grew up in a city and never had much contact to the natural world (unless you count in our cat or the occasional trip to the city forest), so when we moved to Finland I got really excited when I spotted a wild beaver or weasel for the first time. (I’m still waiting for a moose, though.)

And when I learned about the Saimaa seal, I couldn’t stop thinking about it. The Saimaa seal is a freshwater seal that lives exclusively in this one lake in Eastern Finland. Isn’t that amazing? (Lake Saimaa is huge, but still.) And there are only 380 or so of them left. Long story short, they ended up playing a vital role in one of my books, White Nights, which I’ve recently completely revised.

To celebrate the release of the second edition, I’m giving away 20 e-book (mobi/e-pup) copies!

Can you trust your instincts, when they have betrayed you in the past?

Nature lover Litza York is thrilled when she gets the opportunity to finish her PhD in Eastern Finland, researching the rare Saimaa seal. The landscape’s magical beauty and the residents’ friendly hospitality lure her to believe she’s come to the right place to forget about her troubled past.

But the idyll is soon disrupted when someone starts poisoning the object of her study, bringing the Saimaa seal to the verge of extinction.

Together with handsome park ranger Niilo Vuorokoski, she does all she can to protect her favorite animal, and ends up bringing herself in mortal danger…

*** The Northern Nights Series are a series of romantic suspense standalones with no cheating, no cliffhangers and a guaranteed HEA***

BIO
Jenna van Berke loves Gillian Flynn, Nora Roberts, Kylie Scott and everything in between.
Working in the hotel industry, Jenna has encountered innumerable honeymooners, cheating husbands and infatuated co-workers, providing her with ample inspiration for her contemporary romance and romantic suspense novels.
She moved to Finland several years ago with her family.

EXCERPT:
...After a few minutes they reached a small sandbank. As she watched her guide nimbly jump out of the canoe and tie it to a tree, she realized she’d already forgotten his name.
Hesitantly, she followed him into the forest. There was no sign of human life. She had expected to go to a cafésomewhere. “Um… is this island inhabited?”
“Not by humans,” he said without turning around.
She noticed theknifehe was carrying in a narrow side pocket of his backpack. What was he up to?
You’realone with a total stranger somewhere on a deserted island in Finland.Nobody knowsyou’rehere, said the warning voice in her head that had accompanied her ever sincethat dreadful day.
Discreetly, she checked her phone. Crap! She’d forgotten to charge it. And whom could she have called, anyway? She didn’t know the Finnish emergency number.
The forest opened up to a huge area of exposedbedrock,which was characteristic to the Finnish landscape. Here and there the immenserock was covered with a layer of moss and in some places birchsaplingshad managed to settle. It was a pretty steep climb, butfollowing in hispath made the ascenteasy. 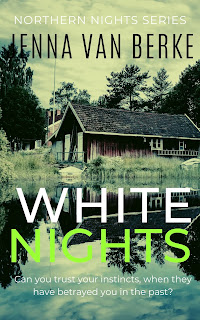 Once again she glanced at the big hunting knife. Absentmindedly, she rubbed her left elbow. Her gut feeling told her he was a good guy, but then her gut feeling had betrayed her before. You’re being paranoid, she told herself. The professorsurely wouldn’t send some psycho to meet her. But how did she know Kaija had indeed sent him? Maybe he had just made the whole thing up. If she ran back to the canoe now, she might be able to get away…
“Um, where are we going?”
He climbed another two steep steps and held out his hand, “We’re already there.”
With mixed feelings she accepted his hand.
***
Order now: books2read.com/whitenights
Or enter to win!
Posted by Maureen A. Miller at 12:36:00 PM