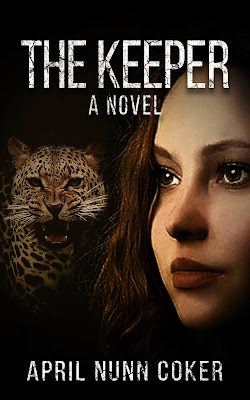 What would you do if you were in a zoo and found yourself face-to-face with an animal which had escaped its enclosure?  My character Jolie finds herself in just that situation.  But first she meets Cade. Could he be the man for her and her little girl?  Will she be able to open her heart to anyone again after The Divorce?  And who is killing animals at the zoo where she works as a night zookeeper?  It has to be an inside job, but who would do such a thing?  Is Jolie in danger?
The Keeper was inspired by my own zookeeper husband, who used to talk about strange things he would see or hear at night at the zoo.  Everything you read in the novel as far as routines, procedures, and animals is based upon a real zoo.  The rest?  My husband's imagination!
EXCERPT from the novel:

Jay hoped Jolie had obeyed his order to leave. They didn’t need to worry about her right now.  As he trudged toward the main entrance, Jay’s eyes swept back and forth with the aid of his flashlight, his body tense and alert for any movement or sound.
The sound of breaking twigs and rustling leaves to his left alerted him to lift his weapon. As he turned, he aimed the rifle, but instead of Cory, an African hunting dog strolled out of the underbrush, snarling and ready to jump him. Just as it leapt, Jay pulled the trigger, dropping it out of the air and killing it instantly. His heart racing, his skin pouring sweat, he picked up his radio. “Code Nine, Lucas. Animals loose in the zoo. Code Nine.”
He heard a shot ring out across the zoo grounds. Lucas already knew.
Stifling another scream, Jolie stood as still as she could, hoping the leopard would decide she wasn’t worth it. Hadn’t it been fed today?
“Suni?  Is that you?” Jolie peered into the darkness, trying to distinguish which of the two leopards this one was. It continued toward her slowly with a low growl that vibrated throughout her body. Surely it would know her voice.
“No?”  She felt strangely giddy. This was it, she just knew it. “Mara?” she choked, trying the other name. It seemed nothing would stop the leopard from moving closer. Jolie swallowed, trying not to panic. Don’t move, she told herself. God, if this is it, please make it quick, she prayed.
Just then a shot rang out, sending Jolie crumpling to her knees. For a split second, she wondered if she had been hit by a bullet, but when she looked up, the leopard was lying on its side, blood pouring out of a gaping gunshot wound. A scream escaped her, sounding as if it had come from someone else. Sobbing, she wondered if she was the next target or if someone had just saved her life.

Giveaway:
If you would like to win a signed copy of The Keeper along with some cool swag, please respond to this post with your email.  And then go to my website and sign up for my monthly newsletter as well.  www.aprilnunncoker.com 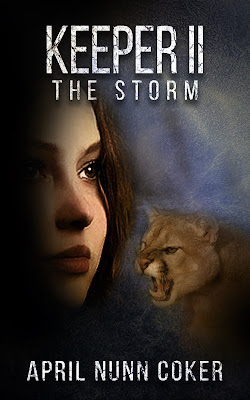 Buy The Keeper and my other books on AMAZON

Giveaway ends 11:59pm EST August 25th. Due to GDPR regulations you no longer need to submit your email address in the comments. If you have been selected as a winner your name will be posted at the top of the post. You may then contact maureen@justromanticsuspense.com to claim your prize. Your email address will be shared with the author/publicist providing the giveaway.
Posted by Maureen A. Miller at 12:30:00 AM