Hidden In The Hills

I’m celebrating the release of my new book, HiddenIn The Hills – Book 2 of the Flint River Series. Flint River is an imaginary town in western Montana. There are three books in this series. Each book is about one of three brothers in the Stone family. Hidden In The Hills, is Trent Stone, the middle brother’s story. 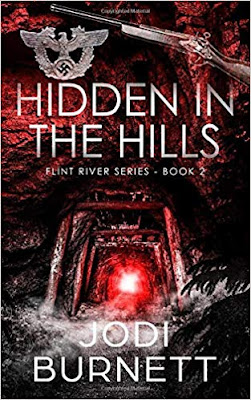 Hidden In The Hills

A Neo-Nazi terrorist is on the run from the FBI. Unable to risk returning to the group’s compound, he’s hiding out in the mountains of western Montana until the coast is clear.

Flint River’s version of Marilyn Monroe, classic beauty Tonya Anderson, misses her ex-boyfriend, Trent, and longs for him to forgive her. Everyone in their small town adores rancher, Trent Stone. He can do no wrong with his piercing blue eyes and provincial, golden-boy charm. Trent and Tonya have been on again, off again lovers since high-school, over a decade ago. But now, he can’t forget her deception, and she’s growing tired of asking.

When Tonya determines to move on, she begins dating a roguishly handsome man she picked up hitch-hiking in the mountains. When this charismatic stranger arrives, what starts out as petty theft in their quiet little town, soon escalates to murder.

Can Trent get over the past in time to protect Tonya from falling victim to the nefarious fugitive tormenting their town?

Capitalists teach their multiracial degeneracy to our children. Third world
criminals flood in and take the few scraps we have left away from us. We need to prepare ourselves for war to take back our American rights.

I’ve never killed anyone before.

Liquid heat swirled through my gut, increasing my thrill. I caressed the cold metal cylinder of the homemade explosive resting in my lap. The remote-control timer lashed to the device with black electrical tape was set for five minutes. That would give us time to get far enough away for cover. I rolled my lower lip between my teeth and wished I could watch close up—see them die.

Our white, windowless van sailed toward our target. “How much farther?”

The driver glanced at me in the rearview mirror. “Calm down. We’ll get there when we get there. We got plenty of time. The robbery won’t happen until the explosion is all over the news and the cops are busy.”

“I wish we didn’t have to hurt kids.” The woman riding shotgun sighed and pulled down her sun visor. She slid the cover off the mirror and popped her dry, pink lips at the reflection. A chipped hot-pink fingernail tidied up a smudge at the corner of her mouth.

The driver glanced at her. “We’ve gone over this a hundred times. I hate it too, but a school explosion gets the biggest reaction. Anything involving kids will be a huge news splash. No one’ll be focused on anything else.”

I tightened my grip on the bomb and peered out the black-tinted, driver’s side window at the buildings drifting by. We turned off the highway and were soon driving through neighborhoods of tall, stately, upper middle-class homes with perfectly trimmed lawns. I scratched at the dark stubble on my jaw and wondered what it would be like to live in something that nice. Then I chided myself. I didn’t need that kind of excess. Those huge houses could fit several families but instead they sat silent and empty all day. Their evening and weekend tenants were probably dual-income families with 2.5 kids.

No, filthy capitalism was one of the evils we were fighting against. What I needed was to be free from the greedy and corrupt iron-hand of the government. I needed a nation of my own, made up of my own kind, and enough land to grow my food with no one telling me what I can or can’t do. We’d all had enough of a government who passed laws set directly against our beliefs, our way of life. That’s what Uncle Jed had told us the bank robbery was for—money to finance a revolution.

After our crew blew up the elementary school, a second team was all set to rob the bank and come away with millions of dollars—a good start in funding our battle. Money from Chicago’s Fed-Cash Central would buy a lot of guns and ammunition for our cause. My pulse danced.

I noticed the van’s speed change. “Why are we slowing down?” I growled, anticipation making my hands shake.

The woman laughed. “You don’t want him to have to pay a double fine if he gets caught speeding in a school zone, do you?”

“Shut up.” I shifted my weight, resisting the urge to shove against the back of her seat. If we got pulled over, it would ruin everything. The driver cracked his window for air and I heard the distant trill of children laughing and playing at the target school less than a block away. Dozens of kids ran and chased each other on the playgrounds during recess.

Those children might get lucky. Not the kids inside though, they wouldn’t know what hit them—I didn’t think. I imagined the adults who were in the building—the teachers, janitors, and lunch ladies. What would they do when they first heard the explosion? What would go through their minds? Besides shrapnel, I smirked to myself.

The moment the driver signaled to turn left into the school parking lot, a siren sounded behind us. “Shit!”

I peered through the driver’s side-mirror. A cop car pulled up behind us with its blue and red lights flashing. “I thought you said you were doing the limit.” I slumped down in my seat so I wouldn’t be seen. “Act natural. Remember, our story is we’re just here to pick my daughter up from the nurse’s office. Keep your mouths shut.” The driver gripped the wheel and pulled over hard, scraping up against a tall thicket of grasses and gorse growing wild at the edge of the road. In the back seat, my pulse ticked inside my head. I had one chance, and one chance only, to get out of there. I pulled the tail of my shirt from my jeans and wiped the bomb casing free of my fingerprints.

Placing the cylinder on the floor of the van behind the driver, I clicked on the timer before I crawled low across the bench seat and opened the side door enough to slide through.
“What the hell are you doing?” the woman hissed.