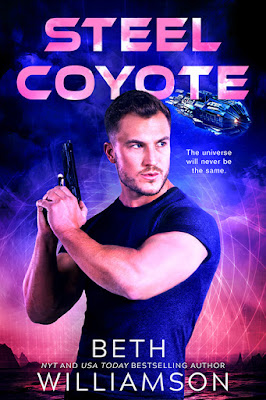 Hey y’all! Beth Williamson here. I’m super excited to publish my first space opera and my first Entangled release! I’m certainly not new to publishing, but this is all new to me. I’ve always loved sci-fi – from the original Battlestar Galactica to the Star Wars reboot and everything in between. I’ve of course loved my cowboys too so why not have cowboys in space?

STEEL COYOTE is the story of a female cargo ship captain Remy, her crew, and the pilot Max (the cowboy!) who inserts himself into a situation because he’s attracted to our captain. In my story you’ll find an unconventional family, danger, a road (space) romance, bad guys, good guys, and a healthy dose of humor.

Below find an excerpt for your reading pleasure!

It was time he found the empty bunks again and made his nest for the night. He needed at least a few hours sleep before he faced the big son of a bitch Cooper. Maybe in the morning, he might even get coffee.

A man could dream, couldn’t he?

“Of course you do. Now shut up.” Max left the galley and headed back down into the crew’s quarters.

After selecting the bunk with the least offensive stench, he stashed his things, laid his coat down, and fell into a fitful sleep. He dreamt of places and people he hadn’t seen in many years and woke sweaty and uneasy. A quick check of the antique pocket watch told him it was four-thirty. Still half an hour before the meeting.

“Are you all right?” Saint spoke from his perch.

Life had taught him many things, not the least of which was if he smiled and had an easy-going attitude, people wouldn’t look deeper. They wouldn’t see the shadows that dwelled within him. He’d lost everyone cared about in his life including his best friend. He’d learn to keep everyone at arm’s length. Max wasn’t a glutton for pain and if he kept numb, then he wouldn’t be hurt.

He finger combed his hair then found the latrine and did his best to wash up in at a faucet that barely squeezed out half a dozen drops of metallic smelling water. It would have to do.
Ten minutes later, he made his way up to the bridge to find Remy. She stood with her feet braced apart, fists on her hips, watching figures scurry about in the shadows of the station’s dock. The light would come momentarily, illuminating that which preferred the darkness. Her spine was straight and seemed to be harder than steel. She was impressive, damn impressive.

“I do the talking when Cooper gets here.” Her voice was whiskey rough. It ran down his skin, making him wonder what it would sound like in a bed, when he could properly show her what pleasure was. “You keep your mouth shut and look like a pilot.”

Her back stiffened more, if that were possible. “This is my life, my ship, my ass on the line here. You’re just a charming stranger amusing himself at my expense. Someone who spends half his time trying to get laid.”

Her words were cutting, sharp as the knife she no doubt had in her boot. He felt each one slide into him, harsh but mostly true. Max was more than what he showed the world but she couldn’t know that.

“You think I’m charming? Well, then I’m doing something right. In my experience, rumors and stories aren’t the truth or even partial truths. You must know that, given how Cooper dismissed you before he’d even met you. I wanted to help you out of a tight spot.”

“It wasn’t your business to rescue me. We’ve been through this already.”

“Stop fighting me, Remy. I’m doing this to help you. I’ve no job and just moved out of the boardinghouse I was living in.” He wanted to move closer to her but didn’t dare. “Why is it so hard for you to accept help?”

“You speak the fair truth.” He pressed his fist to his chest. “I admit I first stepped in because I found you attractive.”

She snorted. “As if I’d believe that.”

He turned to look at her. “You’re stunning. Tall, strong, and beautiful.”

Remy pursed her lips. “Not believing a word of it.”

Someone, somehow, had convinced this exquisite creature she wasn’t beautiful. He understood what it meant to believe yourself to be less than others. He hadn’t expected that with this strong woman. He would convince her otherwise if it was the last thing he did. 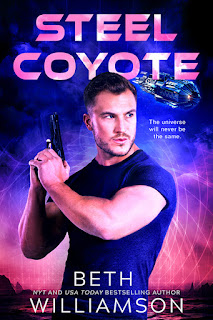 The universe is a tough place to make it as a female cargo ship captain, and Remington Hawthorne fights every day to scrape by. A sketchy deal goes south, and although she doesn’t want anyone else to touch her ship, she’s forced to accept help from the stranger who calls himself Max Fletcher. He’s hot. And he’s trouble. Big trouble. But she’s out of time, out of money, and every crooked cartel is on her tail.


Max Fletcher has spent his life running from his past. So he has no idea what makes him offer to bail out tall, gorgeous, sassy Remy when she needs a pilot to get her illegal cargo to its destination—the last place in the universe he ever wanted to land again.
One thing’s for sure, it’s gonna be a helluva ride.