To Serve and Protect Was Never More Personal

BROTHERS IN BLUE, four heroes who met at the police academy and became lifelong friends. The dropout, the straight arrow, the movie star and the maverick. All share a passion to serve and protect, each in their own unique way.

But what happens to this passion to serve and protect when the women they love with all their heart is the intended victim?

Like Brad Collins, a police officer dropout turned bounty hunter of Book 1, ON THE SURFACE when he realizes his one true love, Jenny Reynolds is in danger…because of him.

“Make no mistake.” The chief took off his glasses and massaged the bridge of his nose. “Your reputation precedes you or I wouldn’t be giving you the time of day right now. You’re the one who needs to remember you no longer carry a badge.”

Brad flinched as the verbal jab hit home. His brothers from the department had him spoiled. That was for sure. There was no way around it. As far as anyone else in law enforcement was concerned, he was no longer one of them.

“This guy is a true bad ass if there ever was one.”

His glasses replaced, the chief leaned forward. “You don’t have to define bad ass to me. I’ve seen Donahue’s rap sheet. It’s as long as both my arms. That doesn’t change the fact you still haven’t given me probable cause.” The glasses came off again. He slid them to the top of his head. “Plus, a second fact remains you should have checked in here with us when you first got to town.”

“I was only here, temporarily, to get a line on the fugitive’s location. I didn’t expect to stick around so long.” There were a lot of things he didn’t expect, none of which he cared to dwell on now.

“You don’t have Donahue’s exact location at the present time either?”

Brad shook his head. “I just know he has expressed plans to come up here. That’s why I’m asking you to send an officer over to the nursing home to assure Etta Reynolds’ safety.”

“Not much to go on. Your hunch that woman is in danger.”

You don’t know the bastard like I do. Brad flattened his palms on the Chief’s desk and leaned forward. “Why take a chance? I understand this sleepy little burg of yours isn’t exactly a high crime region. That doesn’t mean it can’t be.”

He began to share the latest on Donahue’s crime spree when the chief cut him off. “Give me credit for doing my job. I requested a copy of the most recent report from your old department. We’ll take care of Etta. You take care of Donahue.”

Back in his car, Brad made short work of getting out to Rest Easy. He’d hardly lowered his hand after knocking when Jenny opened the front door.

“He said he’d be back up here tomorrow with the first load.” Without preamble, she repeated much of what she’d told him on the phone.

“I got that.” He stuffed his fists in his pockets as he stepped inside.

If she didn’t need the formality of a cordial greeting, he’d do without it too. If nothing else, this sure beat biding his time. Doing nothing but ruminating about the woman he couldn’t seem to get out of his mind. Or any other part of him for that matter. Body. Soul. You name it. Good, bad or indifferent, he was thoroughly committed to one Jenny Reynolds.

Whether she could stand to be in the same room with him or not.

Then there’s Vince Miller, straight arrow police officer working undercover, from Brothers In Blue Book 2, ON THE FORCE when he realizes the love of his life, Sydney Raines, may well be dead…because of him.

Vince pressed his foot down harder on the gas pedal as he fought to block out everything but the highway in front of him. A simple survival tactic as blind faith propelled him on. If he let his mind go where it wanted, all thoughts of Sydney would be front and center. He didn’t want to deal with that much pain just now. To focus on the road was his best option. Straight, flat, predictable.

Until they got to the turn off to the hospital, more specifically, the morgue.

Terror and sadness, rage and impotence stabbed at him from all directions, tearing him up and threatening to destroy his heart. Beside him, Andy Raines wasn’t faring much better.

“It’s not supposed to be like this.” He blew his nose then used the same handkerchief to wipe the tears from red rimmed eyes.

“It’s a hazy connection at best, but right now it’s the only connection we’ve got.” Vince didn’t share the details of the other victims. Not yet anyway. “I just hope to hell I’m wrong.”

“Children bury their parents. Not the other way around.” He coughed into one elbow then dabbed at his eyes again.

Vince kept his lips tight and jaw clenched. The right thing to do was respond. Offer some words of…what? Wisdom? Sympathy? Commiseration? Pity he had nothing to give as they traveled to possibly identify a Jane Doe dead body as someone they each loved more than life.

“I read you the report. There’s no positive ID. Yet.” Vince’s voice was about to break. He swallowed hard, then tried again. “I wouldn’t have gotten you into this at this point, but I thought it would be helpful.”

“To have next of kin on site. Just in case.”

“Yeah.” He spit out the word. For the first time it dawned on Vince the next of kin wasn’t him.

Face in his hands, Andy let out a couple of wretched sobs.
Vince gripped the wheel, shaken to his soul. “There’s a chance it’s somebody else.”

His companion lifted his head, pulled in a heavy breath then coughed. “You’re a damned idiot if you believe that, son.”
Vince choked down a mass of emotional junk. “Then I’m a damned idiot. Humor me.”

“Consider it done. You idiots need all the help you can get.”

To serve and protect was never more personal 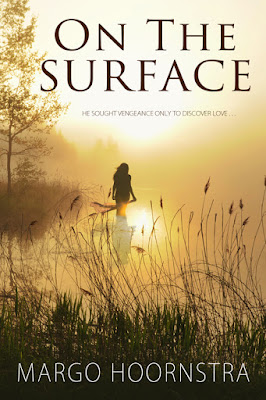 He sought vengeance only to discover love.

Blurb: Wrongly convicted ex-con and recent parolee Jenny Reynolds wants to forget her tarnished past and focus on a brighter future. One that begins with a return to the small tourist town where she grew up. The restoration of her family’s once proud Rest Easy Bed and Breakfast is the only thing on her mind. Fleeing an ex who refuses to let her go, what she doesn’t need to complicate her already problematic life is another man. Enter handsome handyman Brad, a man who seems to care as much about restoring the B and B as she does. A man who soon becomes ready, willing and able to steal her heart. A man, as it turns out, with more than a few secrets of his own. A dropout from law enforcement, the real Brad Collins will use anyone and anything to fulfill a personal vendetta. When two pasts collide and danger threatens, their budding love for each other may be the first casualty. 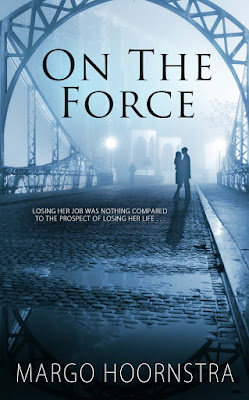 Blurb: Top notch CFO Sydney Raines is devastated when her coveted job working for a high-profile conglomerate is yanked out from under her. Determined to restore a mangled reputation, she finds her second chance when the owner of an upscale art gallery hires her as his personal assistant. Straight arrow cop Vince Miller is assigned to crack an international art theft ring. Working undercover, he never counted on meeting Sydney Raines, let alone falling in love with her. Then an unexpected twist in the case reveals the identity of a serial killer, along with the shattering realization that Sydney could be the psycho’s next victim.

Reader’s Choice Giveaway:
I’m pleased to offer one commenter a format of choice, e-book or print copy, of either Brothers In Blue Book 1, ON THE SURFACE or Book 2, ON THE FORCE  (Print books available in the US only.)

Please visit me at these locations as well.

Bio: Award winning author Margo Hoornstra writes contemporary romance and romantic suspense, always providing that happily ever after for her characters. A big city girl turned country woman, Margo enjoys hiking and walking around the wide-open spaces near her home, especially in the fall, hates to cook and loves to read.