The Mist of Her Memory 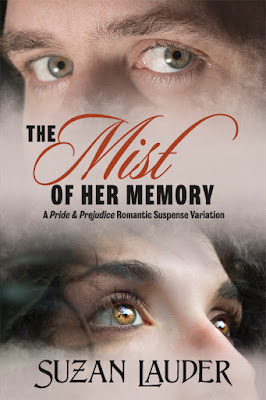 What happened that fateful morning in Lambton?
What brutal attacker caused such grievous, near-fatal injuries?
Does she remain in danger? Elizabeth cannot remember!
Sequestered in her Aunt and Uncle Gardiner’s London home, Elizabeth Bennet tries to recover from a devastating incident that stole her memories during their Derbyshire tour. She continues to suffer from strange, angry voices in her head and to recall events that people tell her never happened. Even those who love her refuse to believe her. Elizabeth can barely endure the confusion!
Fitzwilliam Darcy is desperate for any hint of his beloved’s well-being, yet he lacks the information he seeks as her family forbids him contact with Elizabeth. His frustration mounts when he learns that her mental impairment incited taunting and torment in her home village of Meryton.
Which of Elizabeth’s recollections bear the closest resemblance to the truth? And what is the result of her sister Lydia’s elopement with Mr. Wickham? How is Mr. Darcy to rekindle his romance with Elizabeth when her aunt and uncle strictly shield her from him?
Prepare to grip the edge of your seat during this original romantic tale of suspense and mystery, another Pride and Prejudice variation by bestselling author Suzan Lauder.
“Suzan Lauder skillfully weaves a story that submerges you into the plot and doesn’t let go. The Mist of Her Memory’s twists and turns hold a well-guarded secret that keeps you guessing until the very end.”
̶ author L. L. Diamond 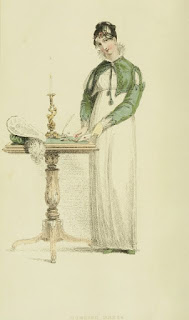 The promise of the trip to the booksellers’ and Gunter’s lightened Elizabeth’s heart a great deal. What a delight to anticipate! Aunt and Uncle must trust her recovery a great deal to allow her this much time out of the house. It gave her hope for other calls.

Her mood was so positive, she was extra chatty over breakfast with the children, indulging them in discussions about fairies and other imaginings particular to young ones. She had a gift of reacting to their childish statements so they felt noticed and important and thus was a favourite with the four Gardiner youngsters. This always lightened the load for her aunt and the nurse as the children could be a challenge for two grown ladies, particularly when one had less energy due to her recent lying-in with a new babe, never mind picking up a small boy who had tripped and fallen and needed his mama.

Soon, the time came to ready herself for the afternoon out. Once she was dressed, Elizabeth gathered her best bonnet and warmest gloves whilst she awaited her uncle’s return.

Her aunt joined her in the sitting room and told Elizabeth that the new babe was finally sleeping, providing some time for her to catch up on her correspondence. She seated herself at the writing desk provided near the fire for the purpose of her writing or enjoying the view whilst seated there. “Perhaps if this trip turns out well, I shall bring you along on a call to Mrs. Fraser to discuss her offer.”

Elizabeth’s day could not possibly get better. “Oh, Aunt, attendance at a ball would fulfil the best part of my dreams!”

Her aunt continued, “We shall have to arrange for some gowns to be made, but it will only be for small, private affairs with families known to us.”

Elizabeth was so excited, it was all she could do not to fly across the room and embrace her aunt as she had earlier, but she maintained the decorum of a lady whilst she replied, “Oh, thank you, Aunt!”

Just then, her uncle returned, and she rose to join him. His face was pink from the cold outdoors, and he grinned widely at the ladies, asking Elizabeth, “Are you nearly ready?”
“Yes, just a few minutes to put on my outer garments.”

Uncle warmed himself by the fire whilst Davis helped Elizabeth on with her merino cloak and handed her the fur muff. Gloves alone simply would not do on this frigid a day. It had been an exceptionally cold winter thus far.

When they entered the front hall and were about to leave, she recalled the broadsheet she read that morning. Given all the faith her family had shown towards her ability to be in public without embarrassing them with what they considered inappropriate statements, perhaps she should take this pleasant permissiveness as a signal. Was this a good time to ask for one small indulgence? She addressed her aunt, who stood in the sitting room doorway.

“Do you think it would be possible to make a call to Miss Darcy someday soon? I thought a great deal of her and should like to renew the acquaintance.”

Uncle’s cheery smile faded into a frown, mirroring that of her aunt’s. What could be wrong with such a request? Aunt replied, “She may not be in town.”

“Mr. Darcy is in town, and I am sure we could find out whether Miss Darcy is as well. Please, Aunt. I should apologize for missing dinner when I had my accident.”

The Gardiners looked warily at one another before he spoke. “I am not certain we should continue a familiarity with that family after what happened in Lambton.”

“But Mr. Darcy provided a surgeon to care for me and was all attention to my well-being; you told me so. He was quite solicitous to us before I fell as well, inviting us to a dinner we did not attend. If he were at home, I could thank him for that and for—” She could not mention specifically his aid to Lydia and Wickham lest that anger them again, so she stopped speaking.

The air in the room became heavy. But why? Elizabeth looked from one to the other. What was it about the Darcys that caused such a change in their happy demeanours? Should she have used the coarse woollen cloak in the back hall to sneak off for the call? The deception struck her as so unseemly, and they had been showing signs of allowing her to make such calls. Her uncle turned towards her aunt, who nodded. Both had grim expressions.

“We must tell her all,” said Aunt Gardiner.

“Very well,” replied her uncle, and he stepped forward to take Elizabeth’s hand. “We learned more about Mr. Darcy from the surgeon’s report after you awoke, and that is the reason we quit Lambton so quickly despite warnings you should perhaps lie still for a few more days.”

“Mr. Darcy was the cause of your injuries.”

“No, your injuries were much more extensive than those you would have obtained in a simple fall. You were beaten and thrown to the floor. Since you were found alone with Mr. Darcy, we could only conclude he was the man who hurt you.”

“No, no! It cannot be! He came to see me. He spoke words of…of…attachment. He could not have hurt me any more than he could have hurt his own sister. You must be mistaken. It must have been another.”

The voices, the shouting, loud and fierce in her head, came back to her along with a sharp pain in her head.

Author Bio:
A lover of Jane Austen, Regency period research and costuming, cycling, yoga, blogging, and independent travel, cat mom Suzan Lauder is seldom idle.
Her first effort at a suspense novel, The Mist of her Memory is the fifth time Lauder has been published by Meryton Press. Her earlier works include a mature Regency romance with a mystery twist, Alias Thomas Bennet; a modern short romance Delivery Boy in the holiday anthology Then Comes Winter, the dramatic tension-filled Regency romance Letter from Ramsgate, and the Regency romantic comedy, A Most Handsome Gentleman.

She and Mr. Suze and two rescue cats split their time between a loft condo overlooking the Salish Sea and a 150 year old Spanish colonial home near the sea in Mexico.

Suzan’s lively prose is also available to her readers on her blog, road trips with the redhead www.suzan.lauder.merytonpress.com, on her facebook author page https://www.facebook.com/SuzanLauder, on Twitter @suzanlauder, and on Instagram as Suzan Lauder. She is a lifetime member of JASNA.

Giveaways
Meryton Press is offering eight eBooks copies of The Mist of Her Memory. Thank you for your support with these giveaways. The giveaway runs until midnight, May 19, 2019.

Terms and Conditions:
Readers may enter the drawing by tweeting once a day and daily commenting on a blog post or a review that has a giveaway attached for the tour. Entrants must provide the name of the blog where they commented. If an entrant does not do so, that entry will be disqualified.

One winner per contest. Each winner will be ran
domly selected by Rafflecopter and the giveaway is international. 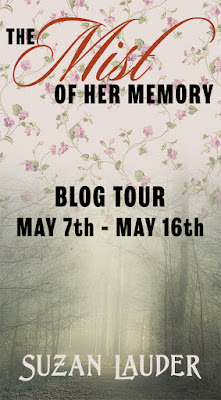 The Mist of Her Memory Blog Tour Schedule