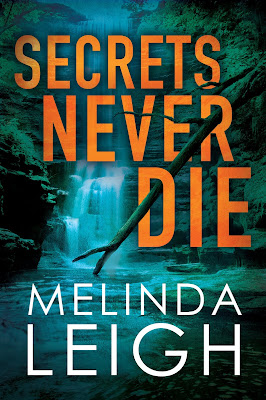 When a retired sheriff’s deputy is shot to death in his home, his troubled teenage stepson, Evan, becomes the prime suspect. Even more incriminating, the boy disappeared from the scene of the crime.

Desperate to find her son, Evan’s mother begs PI Lance Kruger for help. She knows her son is innocent. Kruger and defense attorney Morgan Dane want to believe that too, but the evidence against the boy is damning. Just as the trail goes cold, another deputy vanishes. His shocking connection to Evan’s stepfather throws the investigation into chaos as Lance and Morgan fear the worst…that Evan is the killer’s new target.

With so many secrets to unravel, will Lance and Morgan find him before it’s too late?

Morgan Dane woke to the buzz of a cell phone. Raising her head, she glanced at the clock. One thirty-nine a.m. As a defense attorney, she occasionally received middle-of-the-night calls. People were arrested twenty-four hours a day. But a stomach virus had been making the rounds at the grammar school, and the two oldest of her three daughters had suffered through the bug. This was the first night in four that all her children were sleeping, and her head was as heavy as a bowling ball from lack of sleep.

Her hand was halfway to the cell phone charging on her nightstand when a second vibration, clearly from the other side of the bed, told her the call was for her fiancé, private investigator Lance Kruger.

Nudging Lance, she let her head drop back to the pillow. He was already reaching for his own phone. He swung his legs over the side of the bed and sat on the edge of the mattress.

The alarm in his tone roused Morgan. She levered up on one elbow.

Lance set the phone back on the nightstand, switched on the bedside lamp, and stood. Cotton pajama bottoms rode low on his hips. Morgan’s French bulldog, Snoozer, burrowed under the covers. Dog number two, a bulldog mix named Rocket, raised her head and pricked her ears at the activity.

Morgan sat up. “Who was that?”

“Evan Meade’s mother, Tina.” Lance rushed for the adjoining bathroom, grabbing a pair of pants from a chair on the way. “Do you have anything important on your calendar this morning?”

“Nothing I can’t reschedule.” Morgan tossed back the covers.

Lance coached a hockey team of at-risk youths, a role that had started when he’d been an officer with the Scarlet Falls PD. Even after a bullet had ended his career on the police force, Lance continued as coach. More importantly, he was a mentor to the troubled kids. Since she and Lance had started dating last fall, Morgan had handled most of the boys’ legal issues. “Is Evan in trouble?”

Zipping his black cargo pants, Lance hustled out of the bathroom. His blond hair was short enough that brushing one hand across the top was enough to settle it into place.

“What happened with Evan?” Assuming the boy had gotten himself arrested for something stupid, which was the usual reason one of the hockey parents called Lance, Morgan hurried past him and took a quick turn in the bathroom. Thirty seconds later, she opened her closet, grabbed a pair of black slacks, and stepped into them.

Lance tugged a gray T-shirt over his head. Tall, jacked, and grim-faced, he wore the tactical look well. “Tina came home from work. She found Paul shot to death and Evan missing.”

“Paul is dead?” Shock froze Morgan’s fingers for a heartbeat, then she continued buckling her belt. She’d briefly spoken to Tina’s new husband a few times during hockey games or when he’d picked up Evan from the rink.

“She didn’t do that first?” Odd. Morgan put on a white cotton blouse and shoved her feet into a pair of black pumps.

“No. She was upset.” Lance retrieved their handguns from the safe in the closet.

If Morgan had found a dead body, her automatic reaction would have been to call the police.

He holstered his gun at his hip and tucked it under his shirt. “I’ll start the Jeep.”

Morgan took her Glock and did the same. She grabbed her black blazer from the closet and her giant tote bag from the dresser. “I’ll be out in one minute.”

***
Author Biography
#1 Amazon Charts and Wall Street Journal bestselling author Melinda Leigh is a fully recovered banker. A lifelong lover of books, she started writing as a way to pre­serve her sanity when her youngest child entered first grade. During the next few years, she joined Romance Writers of America, learned a few things about writing a novel, and decided the process was way more fun than analyzing financial statements. Melinda’s debut novel, She Can Run, was nominated for Best First Novel by the International Thriller Writers. She’s also garnered Golden Leaf and Silver Falchion Awards, along with two nominations for a RITA and three Daphne du Maurier Awards. Her other novels include She Can Tell, She Can Scream, She Can Hide, She Can Kill, Midnight Exposure, Midnight Sacrifice, Midnight Betrayal, Midnight Obsession, Hour of Need, Minutes to Kill, Seconds to Live, Say You’re Sorry, Her Last Goodbye, Bones Don’t Lie, and What I’ve Done. She holds a second-degree black belt in Kenpo karate; teaches women’s self-defense; and lives in a messy house with her husband, two teenagers, a couple of dogs, and two rescue cats.