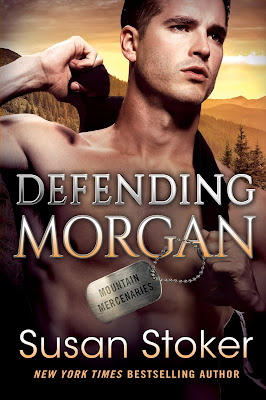 Dispatched to the Dominican Republic to rescue a kidnapped child, former Navy SEAL Archer “Arrow” Kane makes a startling discovery: another hostage—Morgan Byrd, a very beautiful and very well-known missing person who disappeared off the streets of Atlanta a year ago. She’s brave, resilient, and unbroken. All Arrow wants to know is why she ended up in a shack in Santo Domingo. All he feels is the desire to protect.

Morgan is done being the victim and is determined to find out who hates her so much that they want her gone—but not dead. Until then, she has Arrow, an alpha stranger who’s offering a warm and safe place to hide. But as the passion between them flares, so does the fear that whoever took Morgan will do anything to get her back. For Arrow, protecting this woman with a mysterious enemy is the most dangerous mission of his life. And it’s worth every beat of his heart.

Arrow forced his muscles to loosen and listened to his surroundings. As the minutes passed, he catalogued each slight noise and dismissed them as sounds of the city waking up.

He had no idea how long he’d been lying there holding Morgan as she slept, but eventually the warm air and the woman curled into him did their thing … and he fell into a light sleep himself.

The next thing he knew, he was on his back, and the knife he always carried on his belt was against his throat. His eyes opened and looked into Morgan’s panicked, confused green gaze.

“It’s me,” he said in a calm whisper. “Arrow. You’re safe, Morgan. We got away last night.” He could’ve easily disarmed her, but he stayed completely still and willed her to remember who he was.

Comprehension came immediately, and she moved the knife away from his neck. “I’m so sorry,” she apologized. “I woke up and didn’t know where I was.” She scooted away from him, but stayed on her side, watching him warily.

“It’s fine,” Arrow soothed. He didn’t tell her that she was only the second person to ever get the drop on him. He prided himself on always being aware, but obviously he’d dropped his guard a little too much while sleeping next to her. He filed that fact away for the future. “I can’t say that I’m all that thrilled to be here either.”

She frowned in question.

“I don’t like small spaces,” he told her, surprising himself, as he hadn’t admitted that to anyone in a long time. His team knew, but that was about it.

She didn’t immediately respond, but eventually took a deep breath and said, “Can’t say I blame you. I’m not too fond of them myself. But there’s a difference between being in a small space because I put myself there, and being shoved somewhere I don’t want to be.”

It was Arrow’s turn to frown. Was she talking about him making her crawl into this makeshift hidey-hole?

As if she could read his mind, she put a hand on his arm and said, “Not you and not here. Besides, this one is open on one side. Night and day, Arrow. Night and day.”

Swallowing hard and mentally reprimanding himself for jumping to conclusions while at the same time tamping down his anger at whoever had abused her, he asked, “How are you doing?” Shifting until he was sitting with his legs crossed in the small space, Arrow picked up the knife she’d dropped and returned it to the holster at his hip. He had to hunch over, but it felt good to sit.

“Hungry?” Arrow watched as her nostrils flared momentarily before she shrugged nonchalantly.

“We need to get something straight right now,” Arrow said sternly, not looking away from her. “You need to stop lying to me. I’m not a mind reader. If you’re hurt, I need to know. If you’re hungry or thirsty, I need to know so I can do something about it. If you don’t talk to me, this entire mission could go down the toilet. Help me to help you, Morgan.” 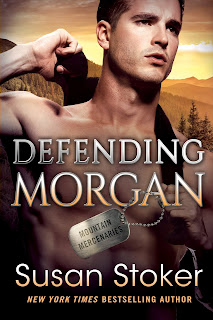 Instead of getting upset, her eyes seemed to shoot green sparks as she said, “I don’t care about food. Or water. Or about getting clean or bumps and bruises. All I want is to get out of here. That’s it. If that means I go hungry, fine. If that means I have to wait a bit to get some water, no problem. But the last thing I want is for you to take unnecessary risks to try to provide for me and get caught. I know as well as you do that without you, I’m screwed. So I’m fine. Peachy. Golden.”

Arrow couldn’t help but smile. This was the woman he’d come to know in such a short period of time. The practical, no-nonsense Morgan Byrd he admired so much. “So if I told you I had some protein bars in my pocket, you wouldn’t be interested then?”

She swallowed hard and licked her dry lips. “I’m interested,” she said simply.

Leaning over, Arrow pulled one of the meal-replacement bars from his pocket. There were hundreds of them on the market now, but no matter how many he’d tried, they all seemed to taste like cardboard to him. But he couldn’t deny they were healthy as all get-out. He never went on a mission without a few stuffed into his pockets. They’d literally saved his life in the past.

Before handing one over to her, he said, “I’m not planning to leave your side until you’re safe, Morgan. I’m going to do my best to avoid going anywhere without you—even to find food or water. I don’t feel comfortable leaving you alone, not until we’re on US soil. Besides, tonight we’ll get out of these lovely accommodations and find my teammates. If I have anything to say about it, you’ll be neck deep in a bubble bath before another twenty-four hours go by.”
***

Susan Stoker is a New York Times, USA Today, and Wall Street Journal bestselling author. Her series include Badge of Honor: Texas Heroes, SEAL of Protection, Delta Force Heroes, and Mountain Mercenaries. Married to a retired Army noncommissioned officer, Stoker has lived all over the country—from Missouri and California to Colorado and Texas—and currently lives under the big skies of Tennessee. A true believer in happily ever after, Stoker enjoys writing novels in which romance turns to love. To learn more about the author and her work, visit her website, www.stokeraces.com, or find her on Facebook at www.facebook.com/authorsusanstoker.