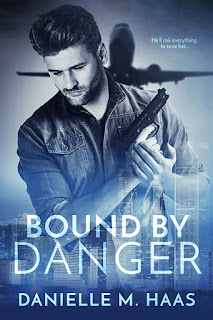 The disappearance of a local girl leads Special Agent Graham Grassi right to the doorstep of the sexy redhead that has haunted him since they were part of a thwarted hijacking last week.
Questioning Mickey O’Shay cuts through him as he informs her about her missing goddaughter, one of the girls involved in his investigation. He wants to keep her safe, but she won’t sit on the sidelines. The life of her goddaughter is in jeopardy and Mickey’s determination has him ready to handcuff her—or kiss her—in place. As time runs out though, the stakes run higher. They both struggle to ignore their attraction as they try to unravel a web of deception-- before it’s too late.


“I didn’t mean to wake you. I wanted a drink of water before I went to sleep.”
She glanced at the clock and raised her brows. “You’re just now going to sleep? It’s almost three.”
Graham lifted the glass to his lips and took a long sip. “I had work to do.”
“Did you find anything?”
He shook his head. “I can’t discuss the case with you, Mickey.”
“But you said earlier it was important to talk to me.” She ground her teeth together. It couldn’t hurt to tell her what he’d found out. Hell, it might even help him. No one knew Pete and Becca like she did.
“I needed to talk to you about what happened tonight, and you gave me some interesting insight. Beyond that, the only thing we can discuss is any information about Pete that you think might be helpful in finding him.”
“I don’t know what else—”
Bang!
Mickey jumped and threw herself at Graham. His strong arms circled around her back and pressed her tightly against his hard body. His lips pressed against her ear. “Shh…you’re fine. It was a car backfiring.”
She closed her eyes and pressed her forehead against his chest. The unsteady rhythm of her heart had as much to do with being so close to him as it did the damn car that scared her to death. Small hairs tickled her skin and she took a deep breath, inhaling an intoxicating blend of spiced cloves and coffee. She lifted her chin and found Graham’s eyes, dark with desire, shining down on her.
Her hair fell across her face, and his knuckles brushed it back, before his hand traveled to the back of her neck. His fingers slid through her matted hair and rested at the back of her head. His other hand pressed against the small of her back, molding her into him. Tingling sensations danced in her belly and her nipples grew hard as they rested against his skin. She bit into her bottom lip. Maybe she should stop this before it started, but the comfort he offered was tempting as hell.
Graham made the decision for her. He leaned down and pressed his lips to hers. A soft moan purred from her throat and she melted into him. She parted her lips and his tongue invaded her mouth. His tongue slid steadily over hers and the taste of him filled her senses. Her arms circled around his neck and Graham’s hands dropped to her ass. His palms settled on her bare cheeks exposed by her thong, branding her skin. Her eyes flew open.
She pulled back and pushed against his chest. What the hell was she doing? Agent Graham Grassi was the last man she should be kissing right now. Hell, she could barely tolerate the man. She struggled to get enough air in her lungs and calm the desire crashing over her.
Graham’s hands covered hers as they lingered on his chest. “What’s wrong?” His breath came out as ragged as hers.
She shook her head and kept her gaze locked on the floor. If she stared up at his sculpted jaw or broad shoulders, she wouldn’t stand a chance. “I know what you think of me,” she whispered.
Graham dropped his hands to his sides and took a step away from her. The distance was small, but it spoke volumes. She glanced up, and he rubbed a hand across his face. “I’m sorry. I shouldn’t have kissed you.”
“I shouldn’t have thrown myself at you because a car backfired,” she said with a smile, trying to ease the awkwardness.
He chuckled. “I don’t blame you for being jumpy. We both need some sleep.”
She nodded and turned toward her room. This day had gone from bad to worse to monumentally embarrassing. She wanted it to be over.
“And Mickey?”
She spun back toward him and her mouth went dry. She cleared her throat. “Yes?”
His lips hitched up on the corner. “Don’t let those backfiring cars scare you tonight. She had a key, remember? No need to make a bunch of noise to break back in.”