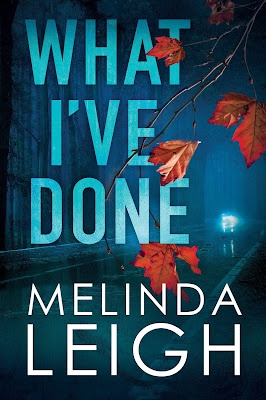 Haley Powell wakes up covered in blood, with no memory of the night before. When she sees a man lying in the backyard, stabbed to death, she has only one terrified thought: What have I done?

Agreeing to take the case as a favor to her PI friend Lincoln Sharp, Morgan must scale a mountain of damning circumstantial and forensic evidence to prove her client innocent. Haley couldn’t appear more guilty: her bloodstained fingerprints are on the murder weapon, and she has no alibi. But Morgan can’t shake the feeling that this shocked young woman has been framed.

Someone out there is hell-bent on sabotaging her defense, targeting Morgan, her partner, and especially Haley. Someone who will stop at nothing—and whose next move will be deadly.

Haley gasped, sucking air into her lungs like a person who had just surfaced after being underwater too long. Oxygen flooded her, and consciousness returned with a rush of sensation that swept over her skin and left it tingling. Pain throbbed through her head as she opened her eyes. Her vision blurred. The blur spun, and she quickly shut her eyes again.

Shimmering lights and loud music flashed in her mind. It had been Piper’s birthday, and she’d talked Haley into going dancing to celebrate, even though Haley would have preferred to hang out in her pajamas, eat pizza, and play video games. Haley had run into Noah and his friends. She and Noah had ordered drinks and nachos. They’d danced.

She blinked. A dim and unfamiliar ceiling fan took shape. She was not in her own bed. Heart racing, she glanced at the pillow next to hers. Vacant. Whose bed was she in? Regret followed close on the heels of the agony splitting her head.

She slammed her eyelids down, rolled to her side, and curled into a fetal position.

This was why she wasn’t a drinker.

This was why she preferred gaming to clubbing.

Had she gone home with Noah? The last thing she remembered was him chatting her up, bringing her a second cosmo. Though she didn’t have much tolerance for alcohol, two drinks certainly weren’t enough to make her black out. She hadn’t had a hangover since college. She’d learned her lesson about overindulging in alcohol during The Great Tequila Incident of freshman year.

But that was before she’d gotten sick. Now she rarely drank, and she never overindulged.

Dizziness swam through her head. Duh. She wasn’t hungover. She needed her medication, and for that, she needed to find her purse. Her stupid Addison’s disease was a pain in the butt. She’d take her meds, then call an Uber and go home. She’d figure the rest out later. Though she hadn’t planned to hook up with anyone, she always carried extra medication with her in case of an emergency.

But last night hadn’t been an emergency. She’d gone home with someone. Shame washed over her, leaving her cold and hollow.

Please let it have been Noah.

It had to have been him. Piper wouldn’t have let her leave with a stranger, even if Haley hadn’t been a best friend last night. She winced as she remembered how much time she’d spent with Noah during a girls’ night out. She and her girlfriend always watched each other’s backs. Always. Piper wouldn’t let something as stupid as a little jealousy bypass their safety pact.

In the back of her mind, something didn’t feel normal, but she shushed the nagging voice. She’d take her meds, her brain would clear, and things would start making sense.

She opened her eyes and blinked a few times. Her vision was still blurry. The light filtering in through the blinds told her it was daytime. Dehydration was a frequent issue with her disease. Her purse sat on the nightstand next to a half-empty bottle of water. She pulled the purse to her and searched for her phone. She didn’t find it, but she did spot her prescription bottle. She swallowed a tablet and drained the water bottle.

An envelope on the nightstand caught her attention. She reached for it. Through the clear window, the label read Noah Carter above a Grey’s Hollow address.

Relief swept over her. Though they’d met only a few times, the chemistry between her and Noah had been palpable. He was a very cute web designer who had consulted for the bank where she was a social media coordinator.

Haley had a weakness for nerds.

Her focus shifted to a crusty substance on her hand. Haley spread her hand in front of her face. Something dark and dry and rust-colored was smeared on her fingers. It took a moment before confusion shifted to clarity.

Disbelief sliced through her haze. She sat upright, the quick motion turning her stomach over. Her gaze cut across the bed. The same rusty marks streaked the bedding, though the dark red was barely visible on the charcoal-gray comforter. Definitely blood. Fear rushed through her. Her heartbeat doubled its rhythm. She turned her hand over but saw no cuts on her skin, nor could she feel any sharp pain anywhere on her body.

She swallowed, her stomach sour. This couldn’t be happening. It must be a nightmare.

Wall Street Journal bestselling author Melinda Leigh is a fully recovered banker. A lifelong lover of books, she started writing as a way to pre­serve her sanity when her youngest child entered first grade. During the next few years, she joined Romance Writers of America, learned a few things about writing a novel, and decided the process was way more fun than analyzing financial statements. Melinda’s debut novel, She Can Run, was nominated for Best First Novel by the International Thriller Writers. She’s also garnered Golden Leaf and Silver Falchion awards, along with nominations for a RITA and three Daphne du Maurier Awards. Her other novels include She Can Tell, She Can Scream, She Can Hide, She Can Kill, Midnight Exposure, MidnightSacrifice, Midnight Betrayal, Midnight Obsession, Hour of Need, Minutes to Kill, Seconds to Live, Say You’re Sorry, and Her Last Goodbye. She holds a second-degree black belt in Kenpo karate; teaches women’s self-defense; and lives in a messy house with her husband, two teenagers, a couple of dogs, and two rescue cats.