Congratulations to "Rachel B.", the winner in Desiree's giveaway. Please contact JUST ROMANTIC SUSPENSE to claim your prize! 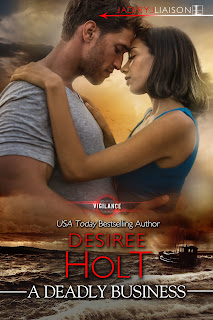 There is nothing quite so deadly as the business of revenge

Just ask me. I know, because one of the most terrifying men in the world wants me dead for revenge.
My name is Marissa Hayes. I was recruited by the CIA because I had what they wanted—a degree from Wharton School of Finance and experience in complicated money transactions. Under the name of Lauren Chapman I spent three years playing a role in one of London’s top money managers. My target? One of their clients, a man named Stefan Maes whose  money came from providing illegal arms to terrorists, funding cartels and raping Third World countries of their resources.
I was close to sealing the deal for the CIA, giving them enough information to take Maes down and freeze almost all of his money, when my cover was blown. That’s a damn scary thing, because when people like Maes get hold of you, death is the most pleasant thing that can happen to you. Lucky for me, my handler had an escape method already planned. He whisked me out of London through back alleys and down seedy streets until I was safe on a boat and then a plane.
Safe!
What a joke!
I thought I was safe when the relocated me to a sleepy little Southern town on the west coast of Florida—Arrowhead Bay. Nothing much happens there, although it does get a lot of tourists. I changed my hair, my makeup, my style of clothing…My name is now Marissa Hayes and I run an art gallery. A far cry from being a spy for the Central Intelligence Agency.
I was sure I was safe and secure in Arrowhead Bay. After all, it is the home of the international security agency, Vigilance, whose agents are all former Special Ops of one kind or another. And then there is Justin Kelly, one of their top agents, who has been teaching me defensive boxing while we dance around a sizzling sexual attraction. He’d defend me with his life, although of course, who could find me? Right?
But Maes’ right hand man, who hated the fact that I rebuffed all his sexual advances, blew my cover with his boss. Now Maes, who had lost a huge chunk of his empire, was out for blood. He wanted my head on a stick and my other body parts scattered to the winds.
Of course, nothing is for certain, and when two of Maes’ agents find me in Arrowhead Bay, I know it won’t be long before Maes himself arrives. Time to get the hell out of dodge, at least until the danger has passed. Vigilance has sent me off to a private Caribbean island, with a bonus—Justin as my bodyguard.
As I write this I am sitting in a private villa at Rosewood on Princessa Key, a luxury resort on a private island, where Justin and I finally gave in to our feelings for each other. But right now Justin is on the phone with Vigilance, where he has received frightening news. Maes has disappeared.
I keep telling myself he can’t find me here. Right?
Right? 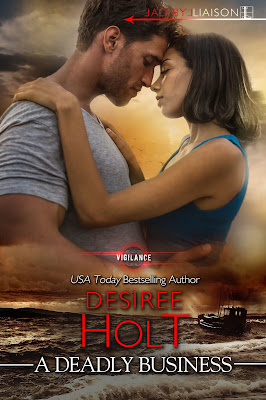 Her life in beautiful Arrowhead Bay seems like paradise. But for former CIA operative Marissa Hayes, it’s a deep cover she’s forced to live under after daring to take down a powerful enemy with strong terrorist ties. Out of necessity, she keeps her emotions as guarded as her life, even as she finds herself drawn to Justin Kelly, the most arousing man she’s ever met. But when Marissa must find a new place to hide, the able-bodied Vigilance agent is the first man she turns to . . .
Justin can’t get close to Marissa, if he hopes to keep her alive. Which only makes sharing a villa with her at a remote island resort all the more challenging. The passion rising between them is exquisite—and excruciating. Even more so when terrorists infiltrate the island, putting Marissa in the crosshairs. Now Justin will do anything to protect the woman he cares about more deeply than he dares to admit. . . .


One lucky reader leaving a comment or email entry can win a $10 Amazon gift card!

Giveaway ends 11:59pm EST August 28th. Due to GDPR regulations you no longer need to submit your email address in the comments. If you have been selected as a winner your name will be posted at the top of the post. You may then contact maureen@justromanticsuspense.com to claim your prize. Your email address will be shared with the author/publicist providing the giveaway.