Congratulations to "Martha L.", the winner in Leigh's giveaway. Please contact JUST ROMANTIC SUSPENSE to claim your prize. Thank you to all who participated! 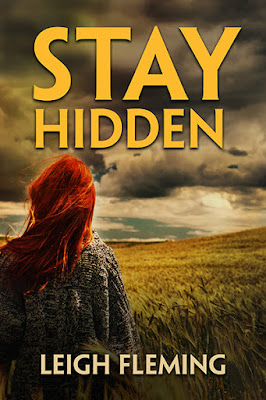 A couple of years ago, I wrote WHATEVER YOU SAY, a contemporary romance set it in the fictional town of Highland Springs, West Virginia. The story is full of quirky, interesting folks who make up the fabric of small town life. But there were two compelling secondary characters that stood out in the story, piquing my readers’ interest. Derek Bronson, the hunky, FBI special agent and Riley Smith, the quiet, mysterious next door neighbor, were destined to have their own book.

STAY HIDDEN, published by Soul Mate Publishing, is the first of three romantic suspense novels in the Hidden Series, and features Riley and Derek. All three books are set in central West Virginia, an area I know well having gone to college in that part of the state. The beautiful mountains, the rugged terrain, and the simplicity of life make for an interesting backdrop to murder, kidnapping, and abduction.

For FBI agent Derek Bronson, Riley Smith isn’t the girl of his dreams. She’s better. Until she’s the prime suspect in his father’s murder.

Riley Smith has something her abusive ex-boyfriend thinks belongs to him. Her. If she doesn’t keep moving, he’ll beat her all the way back to the life she ran away from two years ago. But the picturesque town of Highland Springs, West Virginia, has started to feel like home. She’s gotten a good job. Made a few friends. Ones who don’t know the Riley she once was.

FBI agent Derek Bronson is hunting the man who killed his father in a bank robbery spree, although his week of passion with Riley Smith is sure as hell making it hard to concentrate. Until a convenience store surveillance photo identifies her as an accomplice.

Riley’s only option is to help flush out the men behind the crime, exposing a past she had hoped would Stay Hidden. But the situation is far worse than she ever dreamed. Now she and Derek must fight to stay alive.

Excerpt
It was him. She would recognize that voice anywhere. How had he found her? She had been so careful this time—kept a low profile, changed her long hair to blond, only paid in cash, replaced her track phone every couple of months. How had he traced her to Highland Springs?
Riley couldn’t wait another second. He could be out of that truck and tackling her to the ground in a flash. She ran the final few yards to her porch. Her hand shook so violently, she couldn’t get her key in the lock. With another look over her shoulder, she nearly lost her breath when the driver leaned his head out the window as he drew alongside the curb. His dark, wavy bangs flopped over his forehead, looking so much like—
“Excuse me.”
Stars danced in front of her face.
“Hey, can you tell me how to get to College Avenue?”
She blinked a few times as the keys clattered in her hand. Her vision cleared, and this time when she cast a look over her shoulder, she didn’t see a memory, but a dark-haired teenager who looked nothing like him.
“I’m sorry, Miss? I can’t find College Avenue.”
He didn’t even sound like him.
“Oh, um, okay.” Her mouth was so dry, she could barely speak. “It’s um . . .” Her arm felt weighted down as she pointed up the street. “It’s two more blocks that way.”
“Great. Thanks. Sorry to bother you.”
Riley sagged against the screen door as the old pickup pulled away. She trudged to the edge of her porch, sank onto the top step, and dropped her head into quivering hands. Another false alarm. Her mind, yet again, playing tricks on her. When would she stop seeing his face, hearing his voice? Not until he slipped up and was thrown in jail. Until then, she would keep facing the fear she’d had since leaving Kentucky. She’d keep feeling it—and she’d keep running.

Leigh is giving away a Kindle edition of Whatever You Say and a $10.00 Amazon gift card to one lucky reader posting a comment.

About the Author
Leigh Fleming creates unique characters facing life’s challenges but who are always rewarded with their happy ending. Stay Hidden, the first in her Hidden series, won the Lone Star Writing Contest for romantic suspense in 2017.

A member of Romance Writers of America and the Washington Romance Writers chapter, Leigh lives in Martinsburg, West Virginia, with her husband, Patrick, and her deaf French bulldog, Napoleon, and is mom to adult children, Tom and Liza. When she’s not writing in her windowless office, she enjoys reading, travelling, scrapbooking, and spending time with friends.

Giveaway ends 11:59pm EST June 5th. Due to GDPR regulations you no longer need to submit your email address in the comments. If you have been selected as a winner your name will be posted at the top of the post. You may then contact maureen@justromanticsuspense.com to claim your prize. Your email address will be shared with the author/publicist providing the giveaway.