I Have A Literary Twin!

While imagining the protagonist of the Gilda Greco Mystery Series, I realized she could be my literary twin. I like to tell people that Gilda is 70 percent of me. As to how I came up with that particular number, let’s just say my well-honed left brain did all the work while vivid images and plot twists floated through my right brain.

1. Born and raised in Sudbury, Ontario, Gilda and I lived in the Italian section of town.

2. We love to read and could spend hours curled up with our favorite books. We have a special fondness for cozy mysteries.

3. In school, we were high-achieving, happy nerds who majored in mathematics and then decided to pursue teaching careers.

4. In spite of our mathematical knowledge of probability, we buy lottery tickets. Gilda hit the jackpot and won $19 million in Lotto 649. As for me, I’m still buying tickets and hoping! BTW...the probability of winning Lotto 649 is 1 in 13,983,816.

5. We spent the early years of our teaching careers in Sudbury and later relocated to Guelph in Southern Ontario.

7. We completed the Career Development Practitioner program at Conestoga College. I had hoped to pursue a second career as a career counselor but personal and health circumstances intervened. Instead, I am living vicariously through Gilda who has set up her own ReCareering office in Sudbury.

8. We love our zebra colors. Black pantsuits are staples in our wardrobes.
9. We are non-foodies. That’s right, we don’t like to cook or bake. But we have an appreciation for all foodies who possess that special gift.

10. During our teaching years, we took on the role of yearbook moderator. That came in handy when Gilda had to solve the murder of Sarah McHenry in A Different Kind of Reunion. A yearbook clue helped identify the murderer. 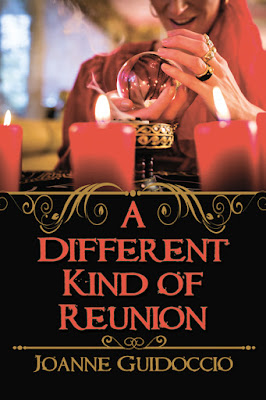 Jim whistled. “You sure don’t like it easy. With all your millions, you’d think this crap could somehow miss landing on you. But you do seem to attract it.” He chuckled. “Might be something to address with a therapist or maybe the psychic you’ve just met.”

“I didn’t just meet Cassandra. I got to know her and her parents very well during those seven months I taught in Parry Sound. They’re good people.” I could tell by his tone that he was dismissive of Cassandra’s psychic powers. While I was also skeptical, I did feel the urge to defend her. She had been so sincere and so open. I couldn’t fathom the notion of Cassandra faking or putting on the airs of a psychic. It wasn’t in her nature to be deceitful.

“I’m sure they are,” Jim said. “But let’s face some facts here. Most psychics need to make a living. I don’t doubt this lady has some intuitive ability—as many women do—but I don’t think it’s enough to catch a murderer. The constable is grasping at straws. What did you say his name was?”

“Tall, dark-haired guy. Good-looking and a bit of a rascal.”
“He’s evolved.” I immediately regretted my response. Knowing Jim, he would pounce and tease me.
“And you’re interested,” Jim said, chuckling. “What does your boyfriend think about this cozy reunion you’re having with a more evolved constable?”

Giveaway:
Click on the Rafflecopter link below for your chance to win a $10 Amazon gift card.
CLICK HERE

Bio
In 2008, Joanne Guidoccio took advantage of early retirement and decided to launch a second career that would tap into her creative side and utilize her well-honed organizational skills. Slowly, a writing practice emerged. Her articles and book reviews were published in newspapers, magazines, and online. When she tried her hand at fiction, she made reinvention a recurring theme in her novels and short stories. A member of Crime Writers of Canada, Sisters in Crime, and Romance Writers of America, Joanne writes cozy mysteries, paranormal romance, and inspirational literature from her home base of Guelph, Ontario.