Who loves a good mystery?

Congratulations to "Linda S.", the winner in Autumn's giveaway. Thank you to all who participated!

I’m so thrilled to be here today and to share the story behind my latest release, Loved By Darkness.  But before I do that, I want to ask the question who loves a good mystery? I do. I’ve always enjoy a story that makes me scour the pages, every word in fact, looking for clues to the big question the author has set up in the opening scenes.  If you adore great mysteries, I think you’ll love Loved By Darkness. 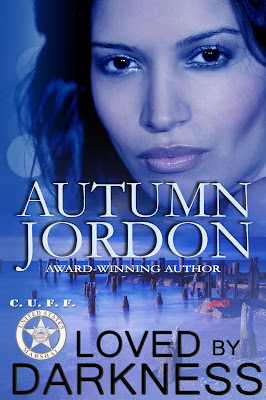 Authors get story ideas in many ways. For me, some event triggers a notion and then what if questions pop into my head. The event could be anything from seeing a driver cut off another driver in early morning traffic or I’ll overhear a bit of interesting conversation.  The premise for Loved By Darkness came to me as I lounged on the beautiful St. Augustine, Florida beach. I was there on a working writing retreat with an author friend. As I scrolled through my Facebook feed, I saw a post from another friend who had just found a little girl lost on the beach in New Jersey. This scenario is nothing new. Children get separated from their families all the time on busy summer beaches.  But a scene immediately played out in my mind as I gazed at a beautiful sail boat gliding across the water in front of me. What if, someone on that boat saw a tiny raft floating out into the ocean and what if a child clung to it? A chilling thought right?

What if questions, are always followed by how, who and why questions.  So the questions I had then were, how had the child been put into the water and by whom and why did they do such a horrible act? These questions lead to others and then to research into the mindset and personality of my villain.  Once I had my villain, then I knew I had to have strong opponents for him.  I also knew this child had to change my heroine and hero’s views concerning themselves and the world.  My heroine, U.S. Marshal Jolene Martinez entered the story. Jolene was a secondary character in Obsessed By Darkness. While she puts up playful, carefree front, she is a dead-serious, bad ass, kickass heroine who has locked down in her psyche a ton of baggage.  Love is not in her plans, ever.

Like most heroes, Police Chief Norris Stiles, has been burnt by love and he’s not looking for the forever girl of his dreams. He knows that woman doesn’t exist, so when he meets Jolene his thought is only to get laid. However, before he can make a move on her, the case of his career lands in his lap and he’s all about catching the perv. As he works with Jolene to learn who the child is and the villain behind the crime, he realizes one night with Jolene would never be enough.  He wants to love, but there is just so much between them. Neither one of them knows even how to begin to make a relationship work, until….

Loved By Darkness has received excellent reviews since its debut last week.  Check them out at Amazon.  Loved by Darkness is also available at B&N, I-Books and Kobo.  I hope you enjoy! 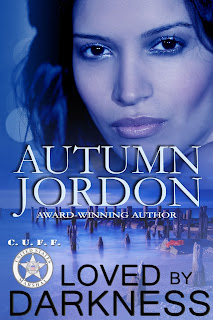 Excerpt from Loved By Darkness

He veered off the main road and made a right turn into a driveway. As he did, the muscles in Norris’ forearms flexed and the tattooed lynx came to life on his arm.
He braked suddenly and she put her hands up in front of her so as not to hit the dashboard.
Eight cars filled the half-moon driveway. The shrubbery alongside the driveway had kept them hidden until they turned in.
“Looks as if there’s a party going on.”
Norris inched his Jeep forward, careful not to tap the bumper of the Dodge Caravan parked in front of them. He maneuvered around it and drove alongside the line of cars. He stopped next to a cherry-red van sitting near the front door then shifted the Jeep into park.
The moment the engine cut, cries for help became clear in the distance. Jolene grabbed her purse from the floorboard and pulled her gun and badge from inside. She glanced back as her sandaled foot touched the pebbled drive. Norris’ door was already closing behind him and he rounded the front of the vehicle.
Only the sounds of crashing waves filled the air now.
They stood side by side, muscles tense, listening.
A blood-curdling scream cut the air.
“What the hell?” Norris sprinted forward.
She followed, backing him up. The snap of his holster sounded and she checked whether he’d drawn his gun. He hadn’t. She understood why he hadn’t. They were in a beach community which catered to families. Until Norris knew what they were facing he kept his weapon sheathed. Jolene followed suit and shoved hers into the waistband of her capris and looped her badge around her neck.
Immediately her heart thumped against her ribs. It always did the moment she entered an unknown situation that had the potential to turn deadly within seconds. She scanned the windows of the house while they kept moving around to the side in the direction of the cries for help. She saw no movement.
The house appeared deserted except there were eight vehicles in the driveway and someone was calling for help from the back of the two-story brick home. A picture-perfect cover for a meth lab, she thought. She wondered what was running through Norris’ mind.
“That sounds like a child,” Jolene whispered, falling into step behind Norris.

About the Author
Autumn Jordon is an awarding-winning author who likes to spend at least a few hours of each day in someone else’s head. She writes both romantic suspense-mystery and contemporary romance comedy. She lives with her family and fur pups in northeast Pennsylvania. Visit her cyber-home at www.autumnjordon and join her newsletter to keep abreast of her misbehaviors or follow her on Facebook.

One digital copy of LOVED BY DARKNESS and a $10.00 Amazon gift card. To enter the contest, type in your comment, 1) the name of the person believed to have kidnapped the child. (Hint look inside) 2) Confirmed you’ve followed me on BookBub.

Giveaway ends 11:59pm EST May 29th. Due to GDPR regulations you no longer need to submit your email address in the comments. If you have been selected as a winner your name will be posted at the top of the post. You may then contact maureen@justromanticsuspense.com to claim your prize. Your email address will be shared with the author/publicist providing the giveaway.