Congratulations to "Mary C." and "Amy S.", the winners in Dee's giveaway. Please contact JUST ROMANTIC SUSPENSE to claim your prize. Thank you to all who participated! 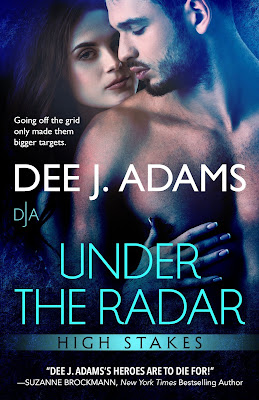 It’s release day and I’m so happy to be spending it at Just Romantic Suspense! I’m also happy because Under the Radar completes the High Stakes series. I’m thrilled that everyone in the St. John family finally has a happily ever after.

One of my favorite scenes in Under the Radar was a night the characters sat around a campfire telling ghost stories. Seriously, who doesn’t love to hear a good REAL ghost story? I won’t spoil the story Vic tells around the campfire, but I will share a recent one that I mentioned on FB a while back.

A few people in my circle know that since moving into my house, there’ve been very clear signs that something else resides there. Instead of telling you the first story of when I learned we were “not alone,” I’ll tell you the most recent.

I was at the kitchen sink and opened my dishwasher. I pulled out the bottom rack and put some dishes in. As I went to pull out the top rack, the shelf came out on its own. Just slid out right where I needed it. I felt the tiniest draft next to me and froze for a second. Then I did the only thing I could do and said, “Uh… Thanks.”

Here's the deal with my dishwasher. The shelves don’t just slide open when I open the door. They have to be pulled out. So for the top shelf to slide out on its own was not normal and it’s never happened before.

Vic shares one of the stories that I went through in the early days of living in my house. Do the three people around the campfire believe her? I’ll only say this…people can be as skeptical as they want, but people who have encountered this kind of thing know what’s real. Though Vic’s telling of the story is in the name of fun, the tension around this group’s reason for camping in the first place is off the charts.

Giveaway:
What about you? Any ghost stories to share? I love hearing them. Two commenters will receive the first book in the High Stakes series, Against the Wall.

Under the Radar
Excerpt:

He’d intentionally traveled away from the stream, so it took time to cut back for water, but if the strategy kept them safe then it was worth the extra time it cost. “I hear it,” Danny said of the rushing water. “Should be right through those trees there.”
He plowed ahead, concentrated on the idea of quenching his thirst and refilling and purifying the water bottles.
“Danny.” Vic’s voice didn’t sound her usual confident self. In fact, she sounded freaked out and—
The distinct rattle stopped him in his tracks and his breath rushed out of his lungs in a single whoosh as he turned and saw the snake. If the brown and gray scales hadn’t given it away, certainly the sound did. Somehow a giant rattlesnake planted itself between them on the narrow path. It slowly reared its head back while its tail rattled a warning. Vic’s eyes widened in paralyzing fear.
“Danny,” she whispered with both plea and panic.
“Stay still. It’s okay.” Frantically, he looked for a stick. Something to whisk the slithery beast far away, but nothing but pebbles and leaves surrounded him. The fucking thing slid closer to Vic, its tongue slithering out, tail rattling and head up ready to strike.
Danny did the only thing he could do. He kicked dirt behind the thing to get its attention. It spun and struck before he even blinked. Shit! He jumped back, felt the contact at his ankle. The fabric tugged as its fangs stuck on his jeans. “Shit! Shit!” Danny tried to shake the beast off and the reptile waved in the air like thick rope.

Giveaway ends 11:59pm EST May 31st. Due to GDPR regulations you no longer need to submit your email address in the comments. If you have been selected as a winner your name will be posted at the top of the post. You may then contact maureen@justromanticsuspense.com to claim your prize. Your email address will be shared with the author/publicist providing the giveaway.