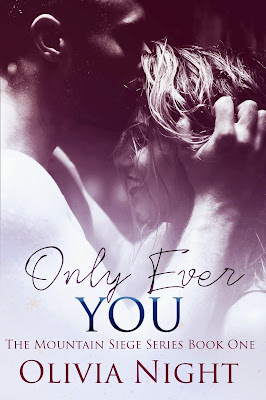 Soulmates should live happily ever after. But Cooper and Emma weren’t so lucky. Torn apart by tragedy after a car accident takes a life, the two live as shadows of their former selves.

But when a dangerous group, The Ridgeliners, blows into town bringing guns, drugs and women with them Asheville, North Carolina braces for impact. After witnessing a murder Emma becomes their most-wanted.

Cooper, a police detective, has no choice but to protect the woman who once made up his entire world.  And still does.

Together, Cooper and Emma struggle to face down their past and the demons that came in their wake. The two must embark on a deeply emotional and difficult journey to find their way back to each other.

But will they have a second chance once the Ridgeliners seize the city? Cooper will do anything to be with Emma again. Including wage a one-man war against an army bent on destruction.

Cooper smiled tentatively at her, and for some reason his kind smile broke her from her trance. She looked down at the table as the panic edging closer hit the back of her throat and she felt her heart pound there. Without looking at him, or another word, Emma made a beeline for the back, not caring if she wasn’t allowed.
She felt a strong grip on her bicep and she was stopped in her tracks. It burned where he touched her. Burned in a good way.
“Emma.”
She closed her eyes at his voice, but didn’t turn around. She moved her arm to try to get it out of his hand, but instead of letting her Cooper turned her instead.
She looked up at him but said nothing.
He opened his mouth and then closed it. His eyes frowned down into hers as he must’ve read the overwhelming sense of terror in them.
She watched his eyes soften as they traveled over her face, almost lovingly. And for some reason that pushed the panic more fully into the center of her chest.
“Stay.” His voice was hoarse. Her eyes shot up to his. He was looking down at her. Concern warring with frustration. Helplessness.
“I-”
“Just sit. Have a drink,” he told her gently. It was almost a demand. So like Cooper. How could she have forgotten? He had always been so bossy. And because of that they’d bickered, a lot. But the makeup sex was always explosive.
But she couldn’t. She couldn’t sit with him and ‘have a drink’. Her heart couldn’t handle something so casual with someone so vital to her. Or rather, who had been vital to her. And what if this was all just to set ground rules for living in the same town? A way to make it all work.
“Please,” he whispered.
The single word spoken softly almost killed her.
She glanced down at the floor. “I’m sorry.” She shook her head. “I thought I could…I can’t.” Cooper’s eyes flared at her words and his grip tightened as he pulled her in to his body.
“You can.” His voice was stronger now. He’d always loved a good argument. And then his lips were on hers. His mouth invaded and claimed as soon as the kiss ignited. She felt his other arm come around and pull her even more tightly against his hard body. Her stomach fluttered and everywhere south of there began to come alive.

About the Author
Olivia Night, a fictional character herself, has always been an avid reader and writer. She found the romance genre in college and has never been able to get enough. One sleepless night, the main characters of Book One in her Men of FTI  series sprang from her head fully formed. They demanded she tell their story; so she did. As they revealed themselves, so did two other intriguing characters. Those characters convinced her to give them their own books because their stories were worth telling too. And so Olivia suddenly became a romance author. When Olivia is not writing, she has the best job in the world, which, too, will remain a secret. In her free time, she reads, write, drinks wine, or is, most likely, out emulating Buffy the Vampire Slayer. Olivia lives in one of the most diverse and vibrant cities in the U.S.—Baltimore. She lives with her cat, which she is convinced was a gladiator in his past life. Olivia plans to continue being awesome at this thing called life. Really, that’s her only goal.