A War of Hearts, the dark romantic suspense series by Karen Lynn

A WAR OF HEARTS –FREE FOR A LIMITED TIME! 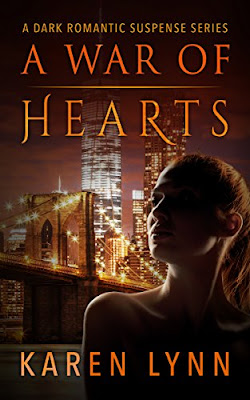 Why do I love writing dark romantic suspense? Powerful emotion and extremely complex, intense characters excite me. I write what I love to read, and stories with highly charged emotions, passion and tension are what I thrive on. That’s why I created broken, imperfect characters in a constant struggle to find and hold onto love without succumbing to the darkness that threatens them. When I write I lose myself in the characters and their fractured worlds. It is a lonely process, but a necessary one because if it is not real to me, it won’t be to my readers either. Every main character deals with some form of mental and emotional turmoil, irrational, compulsive behavior and spiraling out of control obsessive needs. Oh, how we adore those deliciously dark, destructive secrets and fantasies we are afraid or reluctant to share. In dark romance, we get it all. But there’s a lot more involved here.

Love triangles and obsession?  Nobody consciously seeks them. Who wants the trouble, heartache and danger? Kristen, the conflicted heroine in this series certainly doesn’t.  But she gets more than her fair share of it. To truly understand her, you have to open yourself to the experience of deep, all consuming love. With Kristen and Jake, it happens out of the blue and is almost instantaneous. Quite the opposite occurs with Logan, where the bond takes years to build and is very difficult to sever.

If it is possible to love too deeply, Kristen is guilty. Then again, so are Jake and Logan. None of them set out intending to hurt anybody, least of all themselves. Except, possibly Logan, but I’ll let you be the judge of that.  You will find many parts of A War of Hearts and A Sea of Smoke, open to interpretation. After all, life and human behavior are very unpredictable.

Craving a good cry and potent emotional release? I think you will be satisfied. As a hopeless romantic, I believe love is a crucial part of life and second chance romance is very fulfilling. My characters experience disappointment and suffering, but it doesn’t stop them from going after what they need. I don’t think anything will. The question is this: how many lives will be destroyed in the process?

I hope you take the journey with Kristen, Jake and Logan, but don’t forget the tissues. 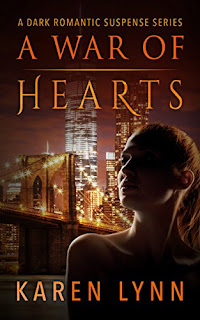 What happens when passion erupts into dark obsession?

They’re about to find out the hard way.

Logan is poison and Kristen knows it.
She’s developed a hatred for the increasingly risqué lifestyle he is addicted to. His lust for deviant sex, women, and drugs threatens to destroy her world. Yet every time she tells herself it’s over, his seductive powers draw her back.

That is until she meets Jake.
Together their worlds are rattled by a love so powerful it promises to change their lives forever.

Unless the manipulative Logan has his way.
As he struggles to preserve his crumbling sanity, his determination to keep Kristen at all costs spirals out of control.

While Jake will die for Kristen.
Logan is ready to kill for her.

Lose yourself in this dark, passionate and deeply emotional tale of toxic love, obsession, revenge and murder.

A WAR OF HEARTS IS AVAILABLE ON AMAZON AND KINDLE UNLIMITED NOW! http://getBook.at/warofhearts

5 Stars! Here’s what some readers are saying about A War of Hearts!

“Loved, loved, loved this book. What a fantastic debut Karen Lynn. I am captivated. This book hit me hard and got into my soul like no other book. Such creativity and very relatable.” - Elizabeth

“I would definitely read more from Karen and I am definitely going to read book two when it comes out. I would recommend this book to anyone who likes a angsty wonderfully written story. Wonderful book!” - Erika

EXCERPT: A WAR OF HEARTS

Jake was waiting outside the little cafe on East 8th Street. When he saw her heading towards him, her face lit up with a bright smile, it brought out a sense of urgency in him. Unable to wait, he ran over, taking her hands, holding them tightly. They stood immobilized in the middle of the busy sidewalk, looking into each other’s eyes, oblivious to the herds of people swarming past them.
"Hey," she finally said, breaking the trance.
"I'm glad you came.” He touched her face, then kissed her. His hand settled on her back, guiding her out of the way of two oncoming bicyclists. "Are you hungry?"
His eyes seemed to penetrate her soul—they were so dazzling, deep, compassionate. She studied his face, committing it to memory. Especially those delicious lips. Dazed, she couldn't think straight.
"I'm not sure..." She shrugged with a shy grin.
"Let's go in. We can find a booth in the back.” For the second day in a row, the twinkle in his eyes was back after a long hiatus. His fingers laced through hers, tight and protective, as they strolled into the dimly lit cafe.
Pulsating indie rock music filled the air. The place was packed, but they finally found a booth close to the back door. He slid next to her, their thighs pressing together. It wasn't satisfying enough for either of them. They moved in closer.
After the waitress took their order, Jake concentrated on Kristen’s face, his fingers tenderly touching the black and blue bruise on her cheek. "I noticed this outside. What happened?" His hand dropped to lay upon hers.
She had forgotten about it and was taken aback. Why hadn't the makeup hidden it? Apparently, his hawk eyes could see right through it. She looked down, avoiding those dark, dreamy eyes. What can I tell him when he doesn’t even know I’m involved with anyone, let alone married? Two men obsessed, one woman caught in the crossfire.

Kristen wears a smile for survival.

Her nights are spent dreaming of Jake, the lover she left behind.
Her days are spent living a nightmare with Logan, who is still unsatisfied in victory.

Jake does not have the comfort of pleasant dreams.
Shallow gratifications fail to quiet his raging mind.
Haunted by his lover's disappearance and his best friend's murder, he grows obsessed.

With so much on the line, Kristen plays the game and bends to Logan's will despite the pain it brings her.

With nothing left to lose, Jake lives on the edge. Consumed by emptiness, he will never rest until he finds the woman he loves. And hurts the man who shattered his world.

The tables have turned, the stakes at an all-time high.  Now, it is just a matter of time before the fine line between love and hate is crossed.

An unforgettable and gripping dark romantic suspense tale that will leave you on the edge of your seat.

But this twisted, emotional roller coaster ride is not over yet!

A SEA OF SMOKE AVAILABLE ON AMAZON AND FREE ON KINDLE UNLIMITED NOW!  https://getbook.at/aseaofsmoke

Watch for Book 3 – TURN TO DUST

EXCERPT: A SEA A SMOKE:

She sat patiently waiting for the tea, enjoying the half-naked sun worshipers parading by, when she saw him. Stiffening, she blinked, thinking the harsh glare of the sun was effecting her eyesight. Pushing her sunglasses higher on her nose, she leaned back into the shade to take a closer look. Her heart stopped. It really was Logan, hand in hand with a tall, familiar looking Latina. They walked right by without ever noticing her sitting there. All alone. They never even saw her mouth flop open in shock, or her face go deathly white. Without a sound, she turned her head, her eyes following them down the block.
“Here's your tea, miss.” The soft-spoken waiter’s voice was lost in a swirl of wind.
Her lips parted, but the words wouldn't roll off of her tongue. A sudden gust of wind whirled across the table, sending the napkins flying onto the ground. For a few seconds, her eyes fixed on them but all she saw was black.
He won’t get away with it this time.
The words continued to play over and over in her mind. She couldn’t turn them off. Or control the quivering that wracked her body.

ABOUT THE AUTHOR
Karen Lynn, a native New Yorker has always loved writing poetry and short stories with intense characters struggling to find love and survive in a troubled world. After years of working in the legal field, Karen moved with her son to Oregon. Inspired by the rain and Portland’s creative culture, Karen has been able to follow her dream of writing novels.
A War of Hearts is her debut novel in this dark romantic suspense series of the same name.