With: Allison B. Hanson


Normally, when writing a suspense, I start with a heroine who has a good head on her shoulders, and put her in a situation she doesn’t know how to handle. Then I give her a hot guy to lend a helping hand as well as a few other essential parts. But Angel Larson in Wanted for Life doesn’t need anyone. Or so she thinks…

Angel has been part of Task Force Phoenix for years, and knows her way around guns, bad guys, and secret missions. Too bad she’s been set up for murder and has to ask someone else for help—something she’s really not good at. 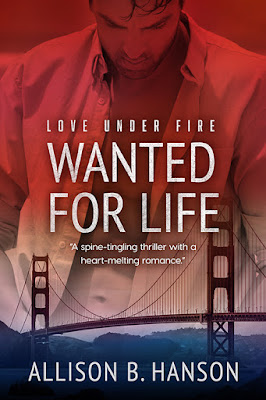 
Deputy Marshal Angel Larson has been set up and accused of murder. On the run, desperate to stay one step ahead of the law and the real killer, she turns to a former protectee in a small town—the man who's haunted her dreams...and fantasies...ever since.
Former DEA agent Colton Williamson misses the action of his past life since entering witness protection as a high school math teacher. He also misses Angel, who refused to join him in his new life. Now it’s Angel who’s in trouble, and Colton can’t help but be there for her—before it's too late.
But the killer may be closer to them than they think.


Each title in the Love Under Fire series is STANDALONE:
*Witness in the Dark
*Wanted for Life

Former DEA agent turned high school math teacher Colton Williamson’s headlights flashed across his modest home before he pulled into the one-car garage. He got out of his truck and went in through the mudroom, as he always did.
Except this time someone was waiting for him. With a very guilty look on his face.
At the sight of brightly colored debris strewn all over the kitchen floor, Colton let out a soft curse. “Dammit, Pudge.”
The mammoth German shepherd let out a whine, not even trying to hide the destroyed tennis shoe at his paws.
“If you were going to chew up a pair of my shoes, why didn’t you go for those loafers with the tassels? They’re an abomination.”
Pudge looked away.
“Right. It would be too embarrassing to be caught chewing on them. How do you think it feels to have to wear them?”
Pudge trotted to the back door and gave Colton the look that meant he needed to go out.
“Fine. But we’re not done discussing this. I am not happy.” He opened the door and the dog rushed out.
Still grumbling under his breath, he closed the door and went to get a beer.
He talked to his dog way too much to be considered normal. He was just glad he had a dog so he wouldn’t have conversations with himself. Yeah, things were that bad.
When the hell were they going to track down Viktor Kulakov, arrest the bastard, and get his trial over with so Colton could get back to his real life?
He’d been in witness protection for a little over a year and it wasn’t getting any easier.
“Moving on. Moving on,” he repeated his mantra out loud. He needed to make a new life for himself.
Tonight he would spend the evening watching an action movie, and point out all the places where they’d messed up. He should know. Between his time in the military, and the eight years working undercover for the DEA, he knew how to carry a gun and bust in a door for real.
He flipped through the TV channels, stopping at a familiar face on the screen.
“Holy shit,” he said, turning up the volume.
“Aubrey Daniels is wanted for the murder of technology mogul Heath Zeller. Please be aware this woman is armed and extremely dangerous.”
“The hell she is,” Colton said to the reporter on the screen. “If she killed that man, I’ll eat those loafers myself. Tassels and all.”
Still, just because he knew with all certainty she hadn’t killed Heath Zeller, it didn’t mean she wasn’t dangerous. She’d hurt Colton, bad.
He knew her all too well. And her name wasn’t Aubrey Daniels. It was U.S. Deputy Marshal Angel Larson.
She’d been the one assigned to protect him as he prepared for Kulakov’s trial a year ago in Philadelphia. They’d spent months together in a safe house. Then one night they got a bit too close. When they ended up in bed the second time, she was adamant it couldn’t happen again.
With only days left before he would move away to start a new life with a new home and a new name, he’d taken a giant leap.
And fallen flat on his face.
He’d asked Angel to come with him. She’d told him she would think about it. But the next morning she was gone. No note, not a word. There was another agent protecting him, and he never saw Angel again.
Not until her photo popped up on his television tonight.
Pudge barked at the back door to be let in.
Colton got up and opened the door wide, but his dog stayed sitting on the porch, tail wagging.
“What are you waiting for, an invitation?” he asked.
“Actually, that might be nice,” came the soft, feminine answer.
His world turned upside down as Angel Larson stepped out of the shadows and back into his life.