I made it all up!

That’s what fiction authors do. We make up things—with the exception of facts gathered from true research. We invent. We imagine plots, characters, locations.

My romantic suspense novels can also be classified as romantic adventures. Along with plots and characters, I’ve made up locations in each of them. Some are real, but most places exist in my imagination. Whatever it Takes, my latest release, is a great example of this. It’s the second of my books set in the fictitious South American country of San Mateo. San Mateo is on the Pacific coast of the continent, has a long coastal desert, mountains and a jungle. If that sounds a bit familiar, maybe from a geography class, that sums up Peru nicely. Yes, San Mateo is based on Peru. But I took a great deal of creative license when I set up San Mateo.

One of my challenges was that of coming up with place names since this is primarily a Spanish speaking country. I tried to make the important ones simple: San Mateo (Saint Matthew), Monte Blanco (White Mountain), San Vicente (Saint Vincent). The capital is Ciudad San Mateo, which should really be Ciudad de San Mateo, but I was afraid that might confuse readers. There really is a Pan-American Highway, a network of roads forming the longest “motorable road” in the word. It runs from Prudhoe Bay, Alaska, to the tip of South America, with a break in Central America. Then there are those “other” place names. Two are real Peruvian place names: Huamachuco (pronounced wa-mah-choo-ko) and Huacachina (wa-kah-chee-na). Huacachina is particularly interesting and worth a Google Images search. 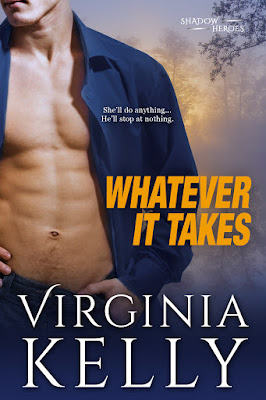 Whatever it Takes is the fourth in my Shadow Heroes series, but each book in this series is a stand-alone novel with its own conclusion and limited overlapping characters.

A woman frantic to find her child…

Laura Iglesias’s young son was kidnapped by a powerful and unscrupulous San Matean ex-general turned politician in order to flush her father, his top rival, out of hiding. With a reward out for her arrest, she’s masquerading as a waitress/caterer so she can get inside the estate where she believes her son is being kept—until a stranger intervenes.

A man with a mission…

CIA special ops officer Mark Williams has no idea what he’s getting into when he helps a pretty waitress avoid the advances of the ex-general. When Mark realizes she’s the widow of a fallen hero whose death haunts him, he vows to help her and her child get away. But helping her puts him at odds with his mission to take down the villainous ex-general. Torn between duty and the debt to a dead man’s family, Mark is forced to make decisions that tear at his soul and could end in disaster.

A country on the brink…

Pretending to be man and wife on a quest to find her son, Mark and Laura fight an overwhelming attraction and give in to desire. But when they discover where her son is hidden, the villain makes a final power play that could destroy the country. Mark’s choices are stark: stop him or save Laura and the boy. And when Laura learns Mark’s true identity and purpose, she must decide if she can trust this man who lied to her about everything, maybe even about the passion they shared.

Whatever it Takes is on sale for $0.99 during release week through April 15, 2018.
AMAZON| Coming soon in print to Barnes & Noble

Giveaway
A little contest: the first three readers to post a link to an image of Huacachina, Peru in the Comments below will win a copy of Dancing in the Dark, the first in my Shadow Heroes series (yes, its location is imaginary). Don’t send a link to Google, go to the site Google links to and copy that URL.

About the author: Virginia Kelly’s books have been nominated for various awards, including the Holt Medallion, the Aspen Gold, the National Readers’ Choice and others. An RWA Golden Heart Finalist, she’s a native of Peru and lives in Florida with her family.

Giveaway ends 11:59pm EST April 12th. Please supply your email in the post. You may use spaces or full text for security. (ex. jsmith at gmail dot com) If you do not wish to supply your email, or have trouble posting, please email maureen@justromanticsuspense.com with a subject title of JRS GIVEAWAY to be entered in the current giveaway.
Posted by Maureen A. Miller at 12:30:00 AM