Girl in the Mist 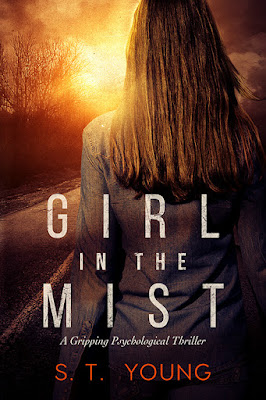 Girl in the Mist, a single-title, taut psychological thriller by S.T.

Infamous for infiltration and becoming her undercover identities, Nina Hernandez disappeared without a trace. Three years later, Naval Intelligence agent Rory O’Donnell finds her in a tortuous mental hospital. He's unsure if it's really Nina, or if she's undercover and faking it. Either way, he's pretty sure something sinister is going on...

Rory springs Nina, and together they elude their determined pursuers. He needs to get her to safety...all while keeping his hands off the beautiful, mysterious young woman. As he works to convince her to trust him and share her darkest secrets, he wonders if he can trust her not to betray his...

Between her mercurial changes, sexy come-ons, and her exasperating independence, a protection assignment has never been so hard. On a dangerous trek across the country as they tumble from one danger into the next, Rory finds that resisting Nina might just be his toughest task yet.

Excerpt of Girl in the Mist

Too close. But now he knew the shooter was three stories up.

Lena could only be one story ahead of him. He began taking four steps at a time.
He didn’t catch up with her until the tenth floor, two stories down from the roof. Without a word, he passed her and took the lead.

She was struggling to keep up, her breathing choppy and loud. The strain was almost too much for her abused body, but he knew she wasn’t about to give up. Calling her stubborn was an understatement. She would kill herself before giving into something as insignificant as exhaustion.

All he could do to prevent a disaster was to keep himself between her and Creed at all times. And who knew, with a little luck they just might make it through this day alive.
He rounded the last corner and caught a glimpse of the black-clad man as he burst through the rooftop exit.

“Oh, no you don’t.” He shoved her back against the wall beside the door. She would have charged through it, possibly straight into Creed’s line of fire. “Lena. For God’s sake. Quit acting like an idiot, damn it! You’re better than this.”

“Will you stop fondling me?” She slapped at his hand and threw him a glare. “I mean it. Hands. Off!”

Ignoring her, he used the tip of his boot to push open the door several inches. A salvo of bullets screamed through the crack, digging into the wall on the opposite side.

He jerked back, allowing the steel door to shut and take the last hit.

He gave her a meaningful look. “I’ll stop,” he ground out, “as soon as you start showing some f**king common sense!” He inhaled deeply to regain his calm. “There’s no cover out there. You’ll be a sitting duck the moment you go through that door.”

“So cover me.” Using the barrel of her gun she pushed his arm away. “Now, move, before that son of a bitch gets away.”

Her impatience and complete lack of caution was wearing thin fast. He bit back another curse. “Stay behind me,” he ordered once again, but didn’t delude himself that she might actually listen.

Taking a deep breath, he braced his weapon in both hands, then crashed through the door, fired two shots at Creed’s moving shadow, rolled over the gravel-covered roof of the building, and took cover behind a large ventilation shaft. It was barely big enough to shield his large bulk, but he gladly took it. With a quick scan, he took in the expanse of roof. And immediately spotted the wiry shape of Jonathan Creed sprinting toward the edge at breakneck speed.

There was a flash of movement as Lena ran past him, gun blazing.

Landing on the roof of the next building, Creed faltered.

Even from this distance, Rory could see blood pouring from his calf. But it didn’t bring him down. He limped twice but still ran for the cover of the stairwell, where he disappeared from sight.

A trail of Lena’s bullets followed him until that last moment, missing him by fractions, plowing into concrete and brick until a click and a curse announced she was out of ammunition.

Rory sprinted toward her as she peered calculatedly over the edge. A good twelve feet separated the buildings.

“Are you fucking insane?” He grabbed her arm, just in case.

Naturally, she tried to pull loose. He didn’t give an inch. At last, with a huff of disappointment she lowered her weapon and removed the empty clip.

“Fast little bastard, isn’t he?” she muttered, but not without a note of admiration. “Takes guts to make a jump like that.” A hard look appeared in her eyes as she wiped at the perspiration on her upper lip. “Shame I have to kill him.”

The sounds of police sirens cut through the busy burr of city noises below.

“Well, fun as that was,” she said cheerfully enough for Rory to want to throttle her, “we should get out of here before the cops show up.”

He just clamped his jaw and followed her to the stairs.