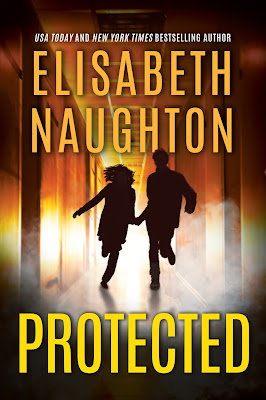 Up-and-coming designer Kelsey McClane is on the cusp of success. Recently divorced, she should be enjoying her newfound freedom and glamorous future. Instead, she’s living in fear of the past. When she returns home to Portland on a press tour, danger creeps closer than ever. As threatening messages from her bitter ex-husband leave her vulnerable, a new man in her life makes her feel protected.Former Army Ranger turned security professional Hunter O’Donnell is hired to guard Kelsey. When a shattering explosion rocks her world, Kelsey’s ex is the prime suspect, but Hunter speculates there’s more to the situation than Kelsey’s letting on. Intent on keeping her safe, he delves into Kelsey’s past. As the two work together to unmask her stalker’s identity, a fire ignites between them that they both struggle to contain.While the investigation proceeds, it draws them closer not only to each other but also to a lethal plot that’s been in the works behind their backs. And with each new secret unveiled, it’s not just temptation putting them at risk—it’s a madman who will not stop until Kelsey is dead.

“Tell me exactly what the text said. Everything you can remember.”

She audibly exhaled, and the sound told him she was fighting hysteria again, but he had to know. “It came through just after the hosts introduced me. It said that I think I have everything but that soon I was going to get exactly what I deserve. It said I was nothing but a disappointment. That he knew the real me, and this—I guess he meant the designer, public part of my life—wasn’t it. It said no one wanted me. That”—she hesitated—“that my own mother hadn’t wanted me.” She paused again. “Then it said the world would be a better place when I was dead, and that in a matter of minutes the world could thank him for making that happen.”

Disbelief turned to a red-hot rage that curled Hunt’s hands into fists. “And it was from Benedict? You saw his name on your screen?”
“No. I mean, I didn’t see his name. I blocked his number several months ago, but I know it was from him.”

“How do you know for sure?”

“Because he’s been harassing me since I filed for divorce. I haven’t been able to prove it because he keeps doing it from different numbers. My attorney thinks they’re burner phones. You know, those throwaway cell phones you can buy preloaded with a certain number of minutes? We’ve never been able to track the calls back to Julian, which is what I needed to get a restraining order, but I know it was him. He’s been sending me threatening texts for months.”

Hunt wanted to jump on blaming Benedict—only experience told him to consider all the possibilities. “Alec told me some of what’s been going on with Benedict. Tell me about the other messages he’s sent you. Were any others like this?”

“They were pretty similar. He liked to point out how useless I was. That my business was going to fail. That my designs sucked. That no one wanted me or my clothing line. That I’d come crawling back to him like a dog before long, and that when I did, he’d have to think long and hard about how he was going to make me pay for humiliating him.”

Hunt’s jaw clenched down hard. The urge to slam his fist through Benedict’s face was stronger than ever. So strong the muscles in his arm ached from contracting.

“I just ignored them, you know?” she went on. “I thought if I did, the texts would eventually stop. They slowed down a little, but my brothers were still worried, which is why they asked you to keep an eye on me while they were gone.”

Hunt knew that. Her brother Alec had told him Benedict was being an ass about the divorce and that they were worried he might do something to retaliate. But Hunt had never expected something like this. To orchestrate the take-down of an entire building, all to get back at her…

“If he’s the one who did this, Kels, the Feds will find out. They’ll get him, don’t worry.”

“I know.” She sniffled again. “I just … I can’t stop thinking about the other people who were in the building with us. The ones we haven’t heard from since everything happened.”

Hunt’s memory flashed back to someone calling for help in the darkness, between the first shake and the second that had brought the ceiling down. Even though he knew he’d made the right choice, guilt twisted in his gut. “This wasn’t your fault. You didn’t do anything wrong. Do you hear me? You didn’t cause any of this to happen.”

“I could have prevented it, though.” She sniffled again. “If I hadn’t been so hell-bent on coming back here for this stupid interview, those people would all still be alive. I-if I’d stayed on the East Coast with the rest of my family, you wouldn’t be here. You wouldn’t have felt obligated to babysit me, and you definitely wouldn’t be trapped in the dark with your legs pinned or”—her words faltered—“or broken.”

His chest squeezed tight again. “Kels, listen to me. First of all, we don’t know where anyone else is. Just because we can’t hear them doesn’t mean they’re dead. People were running toward the exits when the walls started to go. They could be buried too far away for us to hear them. They could already have been rescued for all we know. Don’t assume the worst right now, okay? I need you to think positive. Second of all, I’m fine. I’ve been through way worse than this, trust me. I could tell you stories from my time in the military that would make this look like a party. But more than that, I want you to know that I’m here with you because I wanted to be here. Not because I felt obligated. Not because your brothers forced me to babysit. Because you matter. I’d do whatever I could to keep you safe.”

She sniffled again. And the silence that followed was more deafening than the roar of the building coming down.

“You would?” she finally said.

He relaxed a little because in those two simple words, her voice had sounded stronger. If he was going to get her through this, he had to keep her focused on something other than her fears.

“Of course I would.”

“Why? Because you’re family. I’ve known you almost as long as I’ve known Alec.”

“So you’d do whatever you could to keep me safe because you see me as Alec’s annoying younger sister and you feel what … responsible for me?”

Relief made the corner of his mouth turn up. This was the Kelsey who could drive him wild. The smart, snarky, teasing woman he’d watched spar with her brothers more times than he could count. “Trust me, I don’t see you as an annoying younger sister at all.”

“No. Believe me when I say you are only an annoying younger sister to your three brothers. To every other guy who meets you, you’re an incredibly attractive woman with an amazing talent.”

She was silent so long, he wasn’t sure she was still there. “Kelsey? Did you hear me?”

“I heard you,” she said softly. “I just … I never thought you noticed when I was around.”

Author Bio
Before topping multiple bestseller lists—including those of the New York Times, USA Today, and the Wall Street Journal—Elisabeth Naughton taught middle school science. A voracious reader, she soon discovered she had a knack for creating stories with a chemistry of their own. The spark turned into a flame, and Naughton now writes full-time. Besides topping bestseller lists, her books have been nominated for some of the industry’s most prestigious awards, such as the RITA® and Golden Heart Awards from Romance Writers of America, the Australian Romance Reader Awards, and the Golden Leaf Award. When not dreaming up new stories, Naughton can be found spending time with her husband and three children in their western Oregon home.