Memories assail me and I squeeze my eyes shut, mentally blocking out the images that want to be seen, but they persist, screaming in my mind like magpies. The impact is a punch in the gut that rivals the fat man in a clown suit who’d tackled me on Santa Monica Boulevard during my first week in LA. I’d tripped and cuffed that bastard, arresting him and then spending the night watching Stephen King’s It over a large cheese pizza. Because I’m Lilah -Love, and I’d owned the damn clown. My lips tighten. That’s the way I need to own my memories, and whoever wrote those notes is trying to own me right now. I can’t let that happen. I have to think. I have to figure out what the hell just happened.

I shove off the door and walk to the counter, grabbing my briefcase and charging toward the office, my mind working as I do. Either Kane and I weren’t the only ones here that night, or he broke our vow of silence and told someone about it, someone who is now betraying us both, which I don’t believe. Not because I’m assessing his loyalty to me as rock solid, but he’s not stupid enough to give someone ammunition to use against him. I return to option A: we weren’t alone that night. And whoever was there kept silent until now. The night I came home. Why? What’s the motivation to taunt me now and not anytime in the past two years?

Reaching the office, I charge up the steps, and the minute I’m at the top, I cross to the desk, sit down, and pull my case file from my bag before tossing it onto the desk. Inhaling, my hands flatten on the desk on either side of the file, but I’m not quite ready to open it again. Twisting my chair to the left, I face a wall decorated with nothing but three white boards on the left and a massive floor-to-ceiling bulletin board on the right. These were not my father’s. They were—are—mine, and as I stare at them, a piece of my mind sees all of the many cases I once analyzed here. In fact, by the time I worked from this office, I’d already been labeled the “Murder Girl,” a joke made by a drunk coworker at someone’s retirement party that had stuck. The truth is that almost every single one of the cases I solved in this house started with a dead body. And I solved many of those cases because I wouldn’t give up. I locked myself in this room that I’ve come to know as Purgatory until I found a clue to follow. I reach for my badge and slip the picture out that I’ve hidden there, staring down at a photo of me with Kane Mendez. I flip it over and stare at the pen marks that count down the perps I profiled, whom my efforts helped convict: thirty-one. Thirty-one times that I’ve proven that the sins of my past, which include Kane Mendez, don’t define me.

I stick the photo back inside my badge and then stand up, walking to one of the whiteboards, grabbing a marker from the silver ledge beneath it, and stepping onto the wooden stool in front of it. Ripping off the cap, I start writing the names of the murders I’ve helped bring to trial. I stop ten names in and stare at them, picturing their victims, noting how bloody my life has become. And why is that? I write my answer in huge letters: Because I Am Murder Girl. 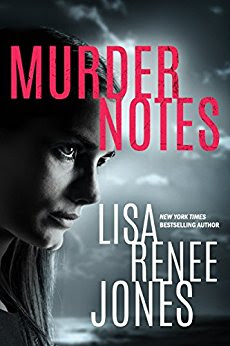 As an FBI profiler, it’s Lilah Love’s job to think like a killer. And she is very good at her job. When a series of murders surface—the victims all stripped naked and shot in the head—Lilah’s instincts tell her it’s the work of an assassin, not a serial killer. But when the case takes her back to her hometown in the Hamptons and a mysterious but unmistakable connection to her own life, all her assumptions are shaken to the core.Thrust into a troubled past she’s tried to shut the door on, Lilah’s back in the town where her father is mayor, her brother is police chief, and she has an intimate history with the local crime lord’s son, Kane Mendez. The two share a devastating secret, and only Kane understands Lilah’s own darkest impulses. As more corpses surface, so does a series of anonymous notes to Lilah, threatening to expose her. Is the killer someone in her own circle? And is she the next target?

About the Author
Lisa Renee Jones is the New York Times and USA Today bestselling author of the highly acclaimed Inside Out series; the Dirty Money series; the White Lies duet; the Tall, Dark, and Deadly series; and The Secret Life of Amy Benson series. Murder Notes is the first book in the Lilah Love series. Visit her at www.lisareneejones.com.