Congratulations to "LibraryPat" and "Kim H.", the winners in Anne's giveaway. Thank you to all who participated! 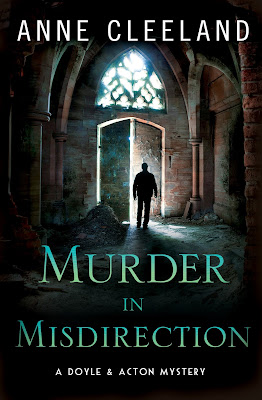 It was a bit puzzling, that Chief Inspector Acton hadn’t mentioned the body they’d discovered in the burnt-out church, even though he must have known that Doyle would be extremely interested.  Was the arsonist caught up in her own fire, or was there a deeper, more sinister tale told by the blackened rubble?

Although she was sidelined on maternity leave, Detective Sergeant Kathleen Doyle was fast coming to the realization that her husband hadn’t told her because he was masterminding some scheme—a scheme that may-or-may-not involve arson, blood money, and the ducks of St. Petersburg.

That night, Doyle had one of her dreams.
She had them, occasionally—only they weren’t truly very dream-like; instead, they usually featured some person—oftentimes a dead person—who was trying to convey some sort of message.  The message never seemed to be straightforward, and the dreams were—truth to tell—a bit frustrating, because the message invariably concerned some dire event that was unfolding or about to unfold, and Doyle always felt as though she wasn’t quite up to the task of deciphering whatever it was that she was supposed to be deciphering.  Nonetheless, she was never anxious or frightened by these dreams; mainly, she was resigned to paying attention, even though it was never very easy.
This time, the person who confronted her was entirely unexpected; the small, slight figure of a priest smiled at her benignly.  His hands were clasped before him, and he appeared to be of an Asian race—Pacific Islander, perhaps.
Since he made no attempt to speak, Doyle ventured, “I don’t believe we’ve met.”
“Oh, no,” the priest shook his head, slightly. “No.” He smiled his serene smile, and didn’t seem motivated to continue the conversation.
“What’s happened to you?”  This seemed the appropriate gambit to get the dire-warnings conversation started; she had some sleep to catch, in miserable snatches, and this fellow was breaking up her fitful rhythm.
“Yellow fever,” he explained. “I was part of the immunization outreach, in Togo.”
“Oh—I’m that sorry for it; it hardly seems fair.”
He bowed his head. “I vowed obedience.”
Doyle frowned doubtfully. “I don’t know as I’d be any good at obedience.”
“Oh, no,” he agreed again, with a smile. “No.”
She wasn’t certain whether it was a sin to be impatient with a priest, and so she decided that instead, she would be as subtle as a serpent. “Tell me, Father, is there anythin’ that I can do for you?”
Thus prompted, the man’s expression grew a bit grave. “Your husband is paying my sister, and she is troubled by it.”
There was a small pause, whilst Doyle wondered if she’d heard him aright. “He—he is?”
“Oh, yes.” He nodded. “Blood-money.”
Doyle stared at him, astonished. “Why—whatever d’you mean? Who’s your sister?”
But instead of hearing an answer, she found that she was staring at her darkened bedroom wall, and listening to the sound of her accelerated heartbeat, echoing in her ears.

Giveaway:
Anne will be giving away 2 signed copies of MURDER IN MISDIRECTION to two lucky people leaving a comment or email entry.

Giveaway ends 11:59pm EST March 2nd. Please supply your email in the post. You may use spaces or full text for security. (ex. jsmith at gmail dot com) If you do not wish to supply your email, or have trouble posting, please email maureen@justromanticsuspense.com with a subject title of JRS GIVEAWAY to be entered in the current giveaway.
Posted by Maureen A. Miller at 12:30:00 AM