There’s a reason every James Bond movie takes place in a foreign locale—it’s exciting. Who wants to read about a spy in Des Moines? (No offense, Des Moines.) Spies have clandestine meetings in Spanish cathedrals, they ride motorbikes through honking traffic in Rome, and they fall in love under the backdrop of the Eiffel Tower. I’m not saying you can’t have a suspenseful love story in a backyard on Main Street, but I am saying that when I set out to write my YA spy thrillers, I chose international locations that I knew would instantly create that sense of romantic mystery.

The first book in the Anastasia Phoenix series, PROOF OF LIES, is set in Rome, Tuscany, and Venice. Anastasia races for her life on the back of a motorcycle while clutching Marcus’ leather jacket as they speed down a Tuscan mountain, gun pointed at their heads and vineyards rolling in the distance. The book ends with an epic battle along the dark canals of Venice; which if you’ve ever been, just screams Phantom of the Opera drama. 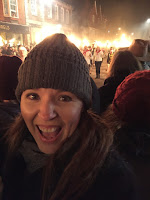 So when I set to write the sequel, LIES THAT BIND, which debuts this month, I knew I had to work hard to top those locations. I hope I did. The book opens with Anastasia and Marcus kissing amidst flaming torches while at a Bonfire Night festival in Lewes, England. My husband and I went to the festival last year as book research, and it was one of the most unbelievable spectacles I’d ever seen. I learned that spectators, surrounded by an alarming amount of open flames, drink so much that night that the local stores board their windows with plywood. I discovered that firecrackers pop so loudly, and so persistently, throughout the night that you could mask the sound of almost anything. And I was able to add these details to Marcus and Anastasia’s journey as they search for Marcus’ missing brother. 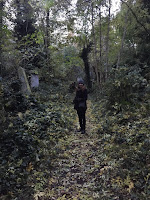 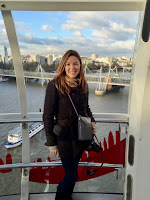 I then take my romantic due to London, where they plan clandestine meetings on a giant Ferris wheel and meet potential allies while playing acoustic guitar at the best Irish pub outside of Dublin. Many of these locations changed significantly after my travels. In fact, in my first draft, a pivotal scene in Marcus and Anastasia’s relationship took place on city balcony with a view of the stars; sure, stars are romantic, but they’re also cliché. After traveling to London, I moved that scene to an eerie, moss-covered cemetery full of crooked tombstones and vine-covered statues that would make Cathy and Heathcliff feel at home. It was a location recommended to me by a dread-lock stranger at bar, and that cemetery made the scene so much better.

The final chapters of the book take place in Rio de Janeiro, Brazil. Honestly, I feel like I could drop the mic right there. It’s hard not to feel romantic while strolling the beaches of Ipanema, but for Anastasia and Marcus there’s just as much life-threatening drama as there is sexy samba dancing. But if you have to fight for your life, and romantic future, standing under the out-stretched arms of Jesus on a mountaintop is not a half bad place to do it.

Essentially, all of my settings in my books are based on my travels. If Anastasia and Marcus eat there, so have I. If they stroll there, I did too.  So while it may be entirely possible to set a romantic spy novel in Philadelphia, my home down, I’d much prefer to take a trip abroad and claim it as a work expense. Just a hint—I leave for Dublin, Krakow, and Prague next month. So expect Anastasia and Marcus to head that way in book three.

Excerpt from Lies that Bind:
“Antonio is fine,” I assured him, my voice as flat as his.
Marcus nodded, trying to force himself to believe. Then he pressed his forehead to mine and sighed, his whole weight leaning into me. I closed my eyes, my cheekbones feeling the flutter of his hair. He needed a trim. We all did. We didn’t exactly have time for stuff like that anymore.
“I have to find him,” he whispered.
“I know.”
He exhaled against me, the heat of his breath warming my chapped, red cheeks.
“This has to end eventually, no?”
We both knew there was no answer to that question, and he really wasn’t looking for one. He needed something else right now. So I shifted my lips toward his, barely a flutter, and we kissed in a way so sad and desperate that the sensation was instantly familiar—only now I was on the other side. Marcus moved his fingers to my hair, and I could feel him trying to forget the world, forget his fears, forget where he was. I knew what he wanted. I had been there myself not too long ago.
I grabbed at his neck and pressed hard against his mouth, moving my tongue until I felt a change within him, the strike of a match. He pushed me against the boarded-up window of a village shop, the splintered raw wood sticking to the wool of my coat as his mouth moved with a new excitement. I moaned slightly, and he slid his hand behind my head, gripping my hair, protecting my scalp from the hard wood, and pulling me closer.
Around us, crowds continued to push past, and I could feel torches glowing brighter, hotter, closer.
Much closer.
I cracked open my eyes and was startled by a man standing inches away, a fiery stick in his hand and a creepy grin on his bearded face. I jolted, pushing Marcus—visions of Department D, deadly spies, and endless threats of set-ups flashed in my head. Panic spread across Marcus’s flushed face as he noticed my reaction.
Then he turned toward the stranger.
Only then did the man move the torch closer, illuminating his face.
That was when I recognized his familiar features—the dark hair, the double dimples, and the near-black eyes that ran in their bloodline.
“Hola, hermano.” 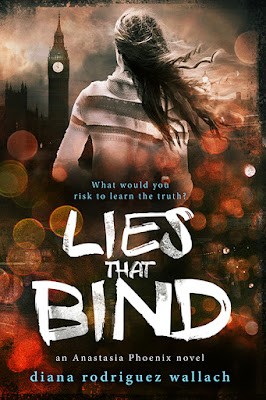 What if saving yourself meant destroying everyone you love?

Still reeling from everything she learned while searching for her sister in Italy, Anastasia Phoenix is ready to call it quits with spies. Then she and her friends learn that Marcus’s—her kinda boyfriend—brother, Antonio, has also gone missing. Luckily, they track down Antonio in a fiery festival in England, only to learn he has been working for the enemy, Department D, the whole time. But Antonio wants out. And so does Anastasia.

But before any of them can leave espionage and their parents’ crimes behind them, a close friend turns up dead. No one is safe, not while Department D still exists. So Anastasia and her friends embark on a dangerous plan to bring down an entire criminal empire, using every Dresden Kid they can find.

As their world becomes surrounded by spies, and the children of spies, Anastasia starts to question who she can really trust. Including her best friends…

About Diana Rodriguez Wallach:
Diana Rodriguez Wallach is the author of the Anastasia Phoenix series, three YA spy thrillers set to debut beginning in March 2017 (Entangled Publishing). She is also the author of three award-winning young adult novels: Amor and Summer Secrets, Amigas and School Scandals, and Adios to All The Drama (Kensington Books); as well as a YA short-story collection based on the Narcissus myth, entitled Mirror, Mirror (Buzz Books, 2013). In 2011, she published a highly regarded essay in Dear Bully: 70 Authors Tell Their Stories (HarperCollins). It was the only essay chosen from the anthology by Scholastic to be used in its classroom materials. Diana is featured in the anthology, Latina Authors and Their Muses (Twilight Times Books, 2015), and she is currently on staff as a featured blogger for Quirk Books. In 2010 Diana was named one of the Top Ten New Latino Authors to Watch by LatinoStories.com, and she placed second in the International Latino Book Awards. She is an advisory board member for the Philly Spells Writing Center, and is a Creative Writing instructor for Johns Hopkins University’s Center for Talented Youth. She holds a B.S. in Journalism from Boston University, and currently lives in Philadelphia.