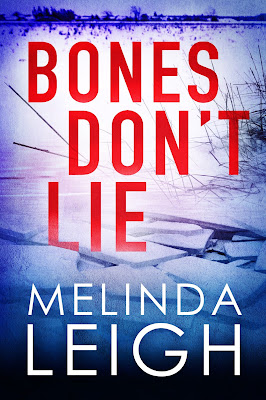 Private investigator Lance Kruger was just a boy when his father vanished twenty-three years ago. Since then he’s lived under the weight of that disappearance—until his father’s car is finally dredged up from the bottom of Grey Lake. It should be a time for closure, except for the skeleton found in the trunk. A missing person case gone cold has become one of murder, and Lance and attorney Morgan Dane must face the deadly past that’s risen to the surface.For Lance, the investigation yields troubling questions about a man he thought he knew. But memories can play dirty tricks. For Morgan, uncovering each new lie comes with a disquieting fear that someone is out there watching, because someone is killing every witness tied to this decades-old crime. Morgan and Lance follow in the shadows of a relentless killer and walk right into the cross fire.

Lance followed Morgan into the duplex in the tiny business district of Scarlet Falls. His boss lived in the upstairs apartment, while the two-bedroom bottom unit had been converted into office space for Sharp Investigations. Two months ago, Morgan had rented the spare room for her new law practice.

They walked down the hall.

“Is Sharp in?” Morgan asked.

Lance ducked his head into his boss’s office. “No.”

Morgan stopped in her office to hang up her coat, then joined Lance in the kitchen. She went to the sink, wet a dishcloth, and dabbed at a spot on her skirt.

Lance pulled out his phone to check his messages. The battery was dead. He opened a kitchen drawer, took out a charger, and plugged in his phone. “Thank you again for helping Eric and his mom. They probably won’t be able to pay you much.”

“I know, but it was only a few hours of my time, and I wouldn’t have let Eric sit in jail, no matter what.”

“I know that too.” She scrubbed at the spot. “But all I have on my plate is a DUI. I have the time.”

Even if she didn’t, Morgan never would have turned them down. Lance was a lucky, lucky man.

He crossed the room and took her face in his hands. “Maybe I can find some way to repay you for your kindness.”

She tossed the paper towel in the trash. “What did you have in mind?”

He kissed her, pulling her close and wrapping his arms around her. “You were a total badass today.” He leaned back. Enjoying the blush that stained her cheeks, he teased her a bit more. “I wanted to kiss you earlier, when we walked Eric out of that courthouse. But I know how prissy you are about PDAs when you’re working.”

“Prissy?” The corner of her lovely mouth turned up. “You call wanting to remain professional prissy?”

“Just a little. But I like it when you’re strict. Makes me feel like a bad boy.” Lance kissed her again and felt her laughter against his mouth.

“I hate to tell you, but you’re more Boy Scout than bad boy. You always do the right thing.”

“Oh, really?” He cupped the back of her head and angled for better access. Her bun got in the way, so he removed the hairpins and let her long black hair tumble to her shoulders.

“I like it down.” More accurately, he liked being the one to take it down. He cruised from her mouth to the side of her neck. He would never get enough of the taste of her.

She responded with a low moan, pressing against him. She was tall, and her body lined up with his perfectly.

“Well this Boy Scout is ready to blow off work.” He checked the time on the wall clock. “Fifteen minutes early. Any chance you can stop at my place before you head home?”

“Fifteen whole minutes early?” She arched backward, her eyes shining. “I don’t know if I can be with such a rule breaker.”

“I’ll make it worth your while.”

***
Author Biography
Wall Street Journal bestselling author Melinda Leigh is a fully recovered banker. A lifelong lover of books, she started writing as a way to pre­serve her sanity when her youngest child entered first grade. During the next few years, she joined Romance Writers of America, learned a few things about writing a novel, and decided the process was way more fun than analyzing financial statements. Melinda’s debut novel, She Can Run, was nominated for Best First Novel by the International Thriller Writers. She’s also garnered Golden Leaf and Silver Falchion awards, along with nominations for a RITA and three Daphne du Maurier Awards. Her other novels include She Can Tell, She Can Scream, She Can Hide, She Can Kill, Midnight Exposure, Midnight Sacrifice, Midnight Betrayal, Midnight Obsession, Hour of Need, Minutes to Kill, Seconds to Live, Say You’re Sorry, and Her Last Goodbye. She holds a second-degree black belt in Kenpo karate; teaches women’s self-defense; and lives in a messy house with her husband, two teenagers, a couple of dogs, and two rescue cats.
Social Media Links
Website: http://melindaleigh.com/
Facebook: https://www.facebook.com/melindaleighauthorpage
Twitter: https://twitter.com/MelindaLeigh1
Goodreads: https://www.goodreads.com/author/show/5141609.Melinda_Leigh
Posted by Maureen A. Miller at 12:30:00 AM