I’ve always loved the mix of romance and suspense in a story. But even more important to me is the relationship between the hero and heroine. In the case of Johnny and Melia, nothing about their relationship ever has been or ever will be simple. Love, loss and sacrifice are the overarching themes in this book.

Johnny gave up the woman he loved in order to save her life. Unfortunately for Melia, she didn’t know what he was doing, or why. So… you can imagine her reaction when she discovers that Johnny and his boss McCabe have tricked her into believing she slept with another man while she was married to Johnny.

Of course, the threat to her life remains, but now Melia has more than one fight on her hands. The first with a man who wants her dead, and the second with her feelings for a man who made her believe she was an adulteress. 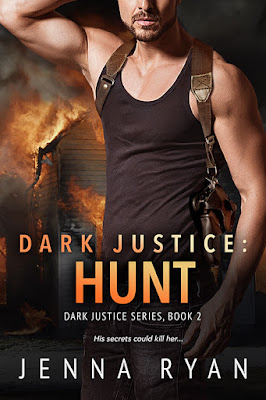 DARK JUSTICE: HUNT
Dr. Melia Rose and ex-Marine Johnny Hunt had it all. Until one night in Atlantic City changed everything. She’s left shocked, confused, and alone, unable to come to terms with what happened.
Hell, she doesn’t even know what happened; she just knows her life has taken a one-eighty.
Now, Melia’s started over—again—in her secluded, boring life in the swamps of Florida. The people are great, she has a housekeeper who may or may not be Bette Davis reincarnated, and it’s quiet. But when her ex-husband shows up, dropping a bomb of epic proportions, her new life is a whole lot more dangerous than she could have ever imagined.
There’s nothing Johnny wants more than to undo the damage from the past. The secrets he’s been carrying have been eating away at him, but protecting Melia was more important than anything else. Even his own life. He managed to save her last time, but the danger is close—too close. In order to save her once more from his demons, Johnny will have to come clean...about everything.
Each book in the Dark Justice series is STANDALONE:
*Dark Justice: Morgan
*Dark Justice: Hunt

Taking the offered whiskey, she swirled it, raised her eyes to McCabe’s, and held his gaze. Bringing the glass to her lips, she swallowed a good mouthful. It burned straight down her throat and into her stomach.
“Where’s Johnny,” she asked when the worst of the firestorm had passed. Then she smiled and took a second slower drink. “Never mind. He’s behind me. I can feel him. Even after three years, I can feel his presence. He’s heading toward us from the side door.”
McCabe’s mouth crooked up.  “You’re good, Mel. I’ll give you that. Scary, but good.”
“My paternal grandmother was born in Brazil. They have a very spooky form of voodoo there. My mother is Irish. She has a sixth, seventh, and eighth sense.”
Damn, this was going to hurt. Turning, looking, seeing for the first time in three years. But she’d get through it, Melia promised herself. Get through it and past it. She’d remember why he’d done it, and try to remember that he’d suffered, too.
“Mel.”
Shit. She forced herself to breathe, released her hold on the whiskey.
“Johnny.” In a single fluid motion, she stood and swung to face him. His features were a blur in the bad light, and he was wearing a ball cap, so she didn’t have to see his eyes. But damn, seeing any part of him after all this time broke her heart into a thousand pieces. Sparking, sizzling pieces. She drew a deep breath and struggled to keep her voice calm. “McCabe and I were just talking about you.”
“Yeah, I bet.”
He came toward her slowly, warily. But she gave him credit; he kept moving forward.
He spread the fingers of both hands. “Look, I know you’re angry.”
“Really? Is that what you think I am? Just angry?”
“I’m hoping.”
She managed a small, humorless laugh. “In your dreams, pal.” Pushing off from the chairback she’d been strangling with her fingers, she willed her heart rate from racing at top speed to a level where she could at least distinguish the beats. “You drugged me and set me up. You lied to me. You made me believe that lie, live with it, hate myself because of it. Three years of self-hatred is a powerful thing. Powerful, destructive, and, sorry, Johnny, cruel.” She jerked her head at McCabe behind her. “I want you and him to leave. Now.”
“Mel…”
Damn him, he didn’t stop advancing. And the whiskey was right there next to her.
She thought he glanced at it. For some reason, that small glance brought a smile to her lips.
“Way too predictable,” she said softly.
And harnessing all the emotions swirling inside her, she balled her fist and punched him in the jaw.

About the Author:
Jenna Ryan was born in Victoria, British Columbia, Canada, but spent her childhood in several different areas of the country. She began creating stories before she could read. Growing up, romance alone had a strong appeal, but as it turned out, romantic suspense was the perfect fit. After all, what could be better than adding the darker elements of a mystery to a romantic relationship? And, oh, the fun of those secondary characters. Over the years, she has worked in several different industries, including modeling, interior design and travel, however, writing has always been her passion - even if she didn't go about it in the usual way. She earned a degree in Creative Writing from the University of Victoria in British Columbia and currently lives in a semi-rural setting fifteen minutes from that city.