You Can’t Drive to Martha’s Vineyard

Congratulations to "Joan V." the winner in Stephanie's giveaway. Thank you to all who participated! 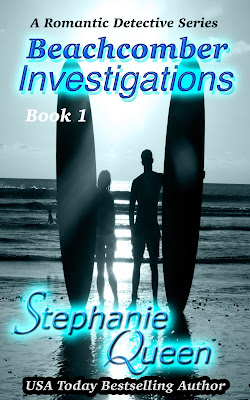 That’s exactly why world-weary ex-special ops legend Dane Blaise settled on The Vineyard when he thought he was finished with the soul-wrenching missions and mind-crushing danger. But he wasn’t finished yet. Not when he owed the governor and the governor insisted on partnering him with her.

They come together like magnets, attracted and repelled by turns, and ended up partners in Beachcomber Investigations, a private detective agency. They work from their world-wide headquarters on the tiny island of Martha’s Vineyard off the coast of Massachusetts.

Remote and solitary in the winter, yet a stone’s throw from Boston and bustling with vacationers all summer. Populated with an array of characters from edgy to comic, It’s the perfect spot for a couple who has no idea what they want.

Here’s an excerpt from BeachcomberInvestigations – BookOne by Stephanie Queen:

Chapter 1
Shana darted a glance at Dane. He was leaning on the doorjamb, oozing his ridiculous brand of sensuality, all casual and strong. Visits to the hospital had always been nausea-inducing events in her life experience, but this visit had a whole different vibe.

With all her might, Shana resisted crediting Dane with the reality-defying mood she felt standing in the middle of this room, immune to the scent of antiseptics wafting around her.

Instead, she tried ignoring Dane and refocused on Cap—Captain Colin Lynch—lounging against his pillows.


Cap was bandaged and sporting a sling and a grin as if the bullet in his shoulder had been a movie prop and he was playing the role of the injured State Police Chief of Martha’s Vineyard—and playing that role poorly.

“You’re not taking your injury very seriously,” she said.

Cap grinned wider. She squelched a long-suffering sigh, because Cap was not one of her younger brothers. Far from it. He was a hunk of a grown man if she was in the mood for admitting things.

Her gaze slid back to Dane as he moved into the room. He eyed her, giving her that sizzling stare. The wave of desire nearly unbalanced her until her survival instincts kicked in.

Without thinking, her chin rose and she stepped closer to Cap as if he would protect her.

As if Dane Blaise were a monster. But he was only a monster if she considered legendary war heroes who routinely saved lives—including her own—as monsters.

No. Dane was no monster, but he was a threat to her well-being. Maybe she was being overly dramatic, but she felt as if he were wielding a knife, with the ability to cut her heart out and shred it to pieces if she were to let him.

She needed to get a grip. 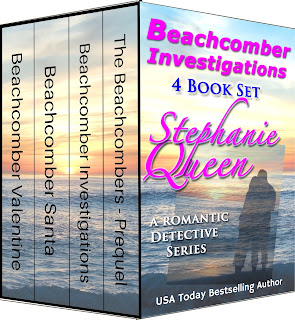 Stephanie Queen is the USA Today bestselling author of the romantic detective series, Beachcomber Investigations which includes 8 books and 4 novellas two spin-off novellas. She lives in bucolic New Hampshire with her family, her cat and her fun-loving friends. Besides going to the gym sporadically, Stephanie cooks and crochets and loves chocolate covered potato chips (yes, she should go to the gym more often).
She used to be a 9 to fiver working in downtown Boston, but has thrown her stylish suits and fancy heels in a closet and now hangs out in UConn t-shirts, jeans and sneakers.

Giveaway ends 11:59pm EST February 17th. Please supply your email in the post. You may use spaces or full text for security. (ex. jsmith at gmail dot com) If you do not wish to supply your email, or have trouble posting, please email maureen@justromanticsuspense.com with a subject title of JRS GIVEAWAY to be entered in the current giveaway.
Posted by Maureen A. Miller at 12:30:00 AM