How watching Murder, She Wrote & The Murder, She Baked Mysteries helped me plot my debut romantic suspense novel ANGEL OF ICE

I’ve always enjoyed reading mysteries. Growing up I devoured Nancy Drew and The Hardy Boys series and later on, I was hooked onto Agatha Christie. Being an avid romance reader as well I was thrilled to discover the romantic suspense genre which combines mystery, intrigue and romance.
While I enjoyed reading romantic suspense, I never really gave much thought to writing one myself. About two years ago, I began binge-watching Murder, She Wrote, the classic TV show featuring the legendary star Angela Lansbury as the mystery writer/sleuth Jessica Fletcher. I went on to watch all twelve seasons of Murder, She Wrote. As I watched, I began to take note of how the episodes were structured and the fashion in which the mysteries were constructed.
There was a formula for constructing each mystery and I began to wonder if I could write a mystery using that same formula.
So I began writing a short story titled Angel Of Ice. As I began to write it the characters of Nick Holt and Laura Fenwick took over and suddenly there were sparks of romance between them and sexy chemistry.
I quickly realised that Angel of Ice wasn’t going to work as a short story and it evolved into a full-length novel.
Late last year when I was polishing my final draft of Angel Of Ice, I stumbled across the Hallmark Movies & Mysteries film ‘Murder, She Baked: A Chocolate Chip Cookie Mystery’, starring Alison Sweeney. I thereafter watched the other movies in the series and discovered it was based on the bestselling novels by Joanne Fluke.
At that point, there were a couple of plot loopholes I was trying to fix in Angel Of Ice. I was also worried about whether I actually got the basics of a cozy mystery-cum-romantic suspense novel correct. It was my first attempt at the genre so I was rather nervous.
I then set about analysing each Murder, She Baked movie. From plot to characters and suspects, to setting out clues and red herrings, to murder scenes and motives etc
I was relieved to discover that Angel Of Ice had all the essential elements and watching the Murder, She Baked movies also helped me resolve my plot issues.
I never imagined I would debut as an author with a romantic suspense novel but it has been the most rewarding writing experience. It was challenging but also great fun.
I’ve learnt that as a writer you have to push yourself creatively and explore different genres.  I did that with Angel Of Ice.
I hope that readers enjoy Nick and Laura’s romance and the mysteries they encounter,  as much as I enjoyed writing it. 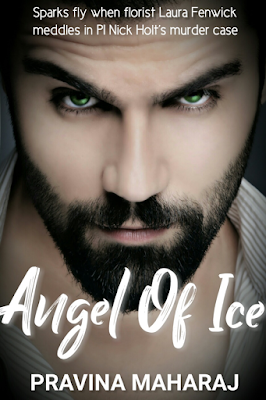 ANGEL OF ICE
A blond female was lying facedown, at the feet of an angel toward the rear of the stage, her arms and legs sprawled out. Laura glimpsed one half of the woman’s face. Her blue eyes were open and glazed, her frosted lips parted slightly. An ice pick was lodged in her left shoulder blade. Scarlet blood stained the white ice.
When PI, Nick Holt is hired by wealthy industrialist Reginald Baxter to find out who murdered his granddaughter Cindy Capwell, in the small town of Edenville, the last thing he needs is a meddling florist to distract him with her alluring beauty.
Laura Fenwick is determined to figure out who killed her friend and insists on aiding Nick in his investigation.  In the pursuit of the killer, passion explodes between them, and Laura realizes a danger far greater than trapping a killer: it’s having her heart captured by a man who doesn’t believe in love.

EXCERPT
Nick moved out of the kitchen into a hallway leading to the open-plan living room. He heard a sound behind him and in a mirror saw a flash of movement behind him. Nick spun around as a young woman came at him, holding up a heavy silver candlestick holder. Nick swiftly tackled her, seizing her from behind, her weapon of choice hitting the floor with a loud clang. The woman struggled against him. She jabbed him in the ribs with her elbow. Nick grunted. More in annoyance than pain. The woman was a handful. Like a she-cat.
Deciding the use of brute strength was the only way to subdue her, he pinned her arms to her side, effectively trapping her against his body. His nose was tickled by golden hair that smelt of citrus. He was aware of the soft curves against him. The scent of vanilla and roses filled the air. He realized it was the unique scent of the woman. His grip loosened on her and she seized the opportunity to twist around, facing him. She stared at him from large, clear-green eyes fringed by long lashes. Her creamy skin was porcelain smooth and her pink mouth was parted in breathlessness.
“Who the hell are you?” Nick growled, still keeping the woman’s arms pinned at her sides.
Indignation sparked in her eyes. “Get your hands off me!”
Nick ignored her and strengthened his hold on her arms. “Who are you and what the hell are you doing here?”
“I’m Laura Fenwick.” The woman gasped. Her chest rose and fell rapidly, drawing his attention to the tempting curves of her nicely shaped breasts.
Nick slowly released her. “What are you doing here?”
Laura glared at him. “I’m not answering any questions until you tell me who you are and why you’ve broken into my friend’s house.”
“Nick Holt, private investigator. What’s your connection to the vic?”
Laura looked offended. “Vic?”
“Cindy Capwell. The woman who was murdered.”
Laura let out a breath. “Cindy was a close friend,” she said with extra emphasis.
Nick hid a smile as he studied her delicate features. She truly was a beauty.

ABOUT PRAVINA MAHARAJ
Pravina Maharaj is a radio producer living in Durban, South Africa. When not scripting radio shows, she loves writing short fiction and passionate contemporary romance. She’s had numerous short stories published in YOU magazine and had her romantic novella Giovanni’s Christmas Bride, published in Second Chances – A Love Anthology available on Amazon.

She holds an English Honors Degree from the University of South Africa
and is also a graduate of SA Writers College.  Her debut romance novel is Angel Of Ice and she is currently at work on her second novel.
Pravina loves to hear from readers – connect with her online:
Facebook:  https://www.facebook.com/PravinaMaharajAuthor/
Twitter: https://twitter.com/pravinamaharaj8
Instagram: https://www.instagram.com/pravinamaharaj/
Blog: https://chaptersofmyworld.wordpress.com
Posted by Maureen A. Miller at 12:30:00 AM