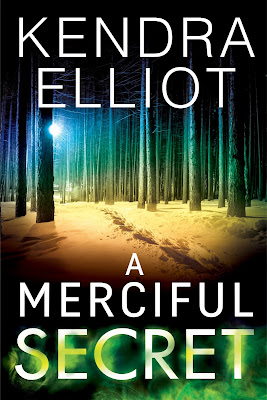 She’d gone home after the eventful morning and had every intention of napping for the rest of the afternoon, but during her shower her brain had shifted into high gear and wouldn’t turn off. She’d lain in bed for a full hour, trying to get the image of Olivia’s abused body and Morrigan’s teary face out of her mind.

She couldn’t do it. Instead she drove to work, planning to find information about Olivia Sabin.

Even if it wasn’t her case.

As she walked through her office’s parking lot, a tall man slid out of a black Range Rover. “Agent Kilpatrick?”

Mercy stopped and wrapped her fingers around the pepper spray in the pocket of her coat. Every coat had one. The stranger had dirty-blond hair that needed a cut and sported a healthy tan even though it was January. His coat looked fresh from an expensive sporting goods store, but his heavy boots were beat up. He held up his hands in a calming gesture and flashed a charming smile. “My name’s Michael Brody. I’m an investigative reporter for The Oregonian.”

Mercy relaxed a fraction. “What can I do for you?” She kept the pepper spray in her hand.

“We have a mutual friend. Ava McLane.”

She’d worked with Ava at the Portland FBI office. “So?” Reporters had never approached Mercy before, but she knew some agents had worked on high-profile cases and complained of their pestering.

“I’d like to talk to you about the murder of Malcolm Lake.” Brody’s intense green stare reminded her of a hawk’s.

Brody frowned. “He’s a judge for the United States District Court of Oregon.”

She was clueless. “I don’t know anything about it. He was murdered?”

“The night before last.”

She’d been out of the office the day before, working from home with the TV and Internet off. “What does this have to do with me?”

Brody glanced at his watch. “Really? No one’s contacted your office yet? I can’t be the first.”

“I wasn’t in the office yesterday and haven’t gone in yet today.” She gestured at the door. “You’re keeping me from doing so.”

“You were at the murder scene of Olivia Sabin this morning, correct?”

He nodded as if that were confirmation. “Her body was deeply slashed several times?”

She kept her face blank, but alarm started to churn in her stomach. How did the press find out I was there? Who leaked that detail?

“Judge Lake was found in the same condition in his home. The extent of his injuries haven’t been released to the public.”

Stunned, she blurted, “Then how did you find out?”

He smiled. “I have my sources.”

Asshole. There’s no way Ava is his friend.

“What I’m trying to figure out is why an important judge like Lake was murdered in the same manner as an old woman living in the woods. The only connection I can see is that the judge lived in this area at one time.”

“I can’t help you. Contact Deschutes County. It’s their case.”

“Ah. Not any longer. With its similarity to the murder of a judge, which of course is being investigated by the FBI—our mutual friend Ava has the judge’s case—the murder of Olivia Sabin now will be included in the FBI’s investigation.”

Mercy was speechless. The FBI now has Olivia’s case?

“I had assumed the local case was given to you since you were present at the scene this morning. I guess I’m wrong about that.”

“How did you know I was there?” Anger had replaced her shock.

“Well, your source left out some important details.” She clamped her mouth shut, nearly having spilled that she’d found the dying woman. She wasn’t going to be Michael Brody’s next ‘source.’”

“Why don’t you go talk to Ava? And there’s no way you’re a friend of hers.”

He gave a lazy grin. “I am. To both her and her fiancé, Mason Callahan. Very good friends. Their dog Bingo adores me, I’ve drunk wine in their newly remodeled kitchen, and I’m on the guest list for their wedding this summer.”

“It’s one of my best qualities.” Another guileless smile.

A small part of her softened. A very small part. The man was charming, but not in a smarmy way. He had an honest air about him. “I don’t have any information for you.”

He glanced at the building. “Maybe you should go see if Ava has arrived yet.”

“She’s coming? Here?” Despite the horrible circumstances, the thought of seeing her friend cheered her immensely.

“I might have beat her to town. Once I heard the investigation was shifting to Bend, I left.”

“You didn’t say why you were at the scene this morning. If you weren’t there as investigator, then why were you there?”

She gave her own lazy grin.

“Hmph,” said Brody with a twist of his lips. “I’m not scared of a challenge.”

Raised off the grid by survivalists, Mercy Kilpatrick believed in no greater safeguard than the backwoods of Oregon. Unforgiven by her father for abandoning the fold for the FBI, Mercy still holds to her past convictions. They’re in her blood. They’re her secrets—as guarded as her private survival retreat hidden away in the foothills.In a cabin near her hideaway, Mercy encounters a young girl whose grandmother is dying from multiple knife wounds. Hundreds of miles away, a body is discovered slashed to death in a similar way. The victims—a city judge and an old woman living in the woods—couldn’t be more different. With the help of police chief Truman Daly, Mercy must find the killer before the body count rises. Mercy knows that the past has an edge on her. So does her family. How can she keep her secrets now…when they’re the only things that can save her?

Author Biography
Kendra Elliot has landed on the Wall Street Journal bestseller list multiple times and is the award-winning author of the Bone Secrets and Callahan & McLane series and the Mercy Kilpatrick novels. Kendra is a three-time winner of the Daphne du Maurier Award, an International Thriller Writers finalist, and an RT Award finalist. She has always been a voracious reader, cutting her teeth on classic female heroines such as Nancy Drew, Trixie Belden, and Laura Ingalls. She was born, raised, and still lives in the rainy Pacific Northwest with her husband and three daughters but looks forward to the day she can live in flip-flops. Visit her at www.kendraelliot.com.


http://www.rafflecopter.a Rafflecopter giveaway
Posted by Maureen A. Miller at 12:30:00 AM