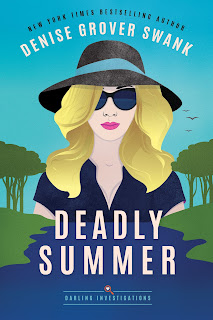 Two days later, the production company put me on a red-eye from LA to Atlanta. Marina had pouted big-time when she’d realized she couldn’t come with me, but I’d promised to call her often and fill her in on the details.

My plane was supposed to land around six in the morning, and Lauren’s assistant, Karen, was scheduled to pick me up on the curb at six thirty. Instead, my plane had mechanical issues that delayed our takeoff, and Karen picked up my two bags and me at seven thirty.

She gave me a strained glance when I got in the car. “Lauren’s going to be pissed.”

“She can’t be angry over something that was out of your control,” I said, fastening the seat belt as she punched the gas pedal and tore away from the curb.

“She’s not going to be angry with me.” Her sympathetic look told me all I needed to know.

“I presume we’ll start filming soon after we get to Sweet Briar,” I said, leaning my head back on the seat. I’d barely gotten any sleep on the plane.

“Everyone will be ready and waiting . . . in about an hour.” It would take two to get there.

“I didn’t purposely sabotage the armrest on row twelve,” I said. “I can’t help it if it took them so long to get the part.”

Karen didn’t say another word for an hour other than to refuse to go through a Starbucks drive-through for a much-needed cup of caffeine.

The lack of sleep, paired with the movement of the car, soon had me dozing. The next thing I knew, Karen was pulling into a parallel parking space in downtown Sweet Briar.

I sat up, and a mixture of relief and anxiety washed through me. I’d lived in this town until my mother moved us out to LA when I was fourteen. It was funny that a lot of people born and raised in Sweet Briar were desperate to escape. I’d spent six years of my youth desperate to come back, but no amount of begging had swayed my mother. She’d insisted I was ridiculous to want to give up a very lucrative contract at a major kids’ network to return to a backward southern Alabama town that everyone else was dying to escape from. What she really meant was she didn’t want to give up my seven-figure income. How ironic that she’d run straight back home about two minutes after stealing most of my money.

What was I going to do if I saw her while I was here?

The chances of running into her were pretty high. Sweet Briar had a population of 2,731, as of the most recent census. Then again, last I’d heard, my mother had built a huge house out on Highway 10, halfway between Sweet Briar and the Alabama/Georgia state line. Maybe she wouldn’t come into town.

Who was I kidding? The moment she heard there were cameras in the vicinity, she’d be looking for the spotlight.

I got out of the car and breathed in the air. It smelled different here—fresh and clean—bringing on my nostalgia full force. It was the middle of April, and the tulip trees along Main Street were covered in pink blossoms. I sucked in a deep breath trying to put a name to the scent, only coming up with one:

I quickly stuffed that notion away. I suspected my return would be met with cool disdain. I wasn’t welcome here. Not by the people who truly mattered.

But if I could deal with Lauren, I could enjoy the two weeks I was here. I would let myself imagine a life different from the one my mother had forced upon me.

“Come on,” Karen said, gasping as she checked her phone. “Lauren’s furious.”

Great. But pissed or not, Lauren wasn’t going to rush my reacclimation. It was like jumping into a pool of freezing water. I was still trying to work up the courage.

Downtown consisted of one-and-a-half blocks of shops and restaurants, and Karen had parked at about the halfway mark, giving us a wide view of both ends. I stood next to the open car door, trying to steady my nerves as I studied the storefronts. Not much had changed. There were several new places—a coffee shop, a yoga/fitness studio, and a nice-looking restaurant, but everything else was the same—the beauty shop, barbershop, a vintage-goods store, a clothing store, a small pizza place, a café, and a pharmacy. The chamber of commerce had an office on the corner in what used to be the bank years ago, but it was the retail space sandwiched between the yoga studio and the pizza place that caught my attention or, more accurately, the sign over the space . . .

She’d named it after that stupid nickname the press had given me a decade ago.

Lauren might be furious, but she was about to face my own fury. I slammed the car door shut and marched up the sidewalk to demand she change the name.

“Summer!” Karen called after me. “Wait!”

There was a small crowd of people out front, and it sounded like they were in a shouting match with a police officer who stood with his back to me. There was something to be said for the view. His broad shoulders stretched the fabric of his black uniform shirt, and his pants hung on his backside in a way that made me reconsider my usual apathy about men’s butts. His dark-brown hair was trimmed close to his head, and he was tall enough that he towered over some of the women in the small group carrying signs that read THE SUN SHINES WHEN SUMMER’S HOME and WELCOME BACK TO SWEET BRIAR, AMERICA’S DARLING!

“We have every right to be here!” a woman shouted, raising her sign. A Lab-mix dog sat at her feet, and each time she lifted up her sign, she yanked his leash tight. “And just because you don’t want them here doesn’t mean you can make us leave!”

“You’re blocking the sidewalk, Sonya,” the officer said with strained patience. “You can assemble, but Hugo’s pissed because people can’t get around you to the barbershop.”

He made a sideways motion with his hand. “Now if you’d just clear a path for the passersby, you would make my life a hell of a lot easier.”

His voice was familiar, and horror washed through me when I realized why. It just figured that the first person I’d run into was my old boyfriend. 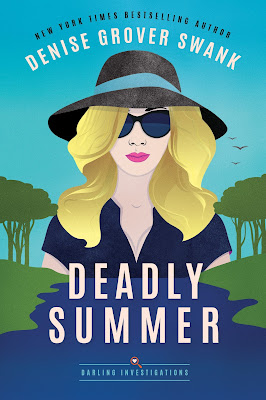 Ten years ago, Summer Butler was television’s most popular teenage sleuth. Since then, she’s hit—what gossip sites just love to call—the gutter. Nearly bankrupt, betrayed, estranged from her greedy mother, and just about unemployable, she’s coaxed into that desperate haven for has-beens: reality TV.Winging it as a faux PI, she’ll solve off-the-cuff mysteries in her hometown of Sweet Briar, Alabama. For added drama, there’s police chief Luke Montgomery, inconveniently Summer’s first and only love.It’s when Summer stumbles upon a very real corpse that Darling Investigations takes an unexpected twist. The growing list of suspects is a big draw to viewers, but the reality is that Summer doesn’t know whom she can trust. Someone has written this killer new scene especially for her, and unless Summer gives the role everything she’s got, it could be her last…

Biography
Denise Grover Swank is the New York Times, Wall Street Journal, and USA Today bestselling author of the Rose Gardner Mystery Series, the Magnolia Steele Mystery Series, The Wedding Pact Series, The Curse Keepers Series, and others. She was born in Kansas City, Missouri, and lived in the area until she was nineteen. Then she became a nomad, living in five cities, four states, and ten houses over the course of ten years before moving back to her roots. Her hobbies include witty Facebook comments (in her own mind) and dancing in her kitchen with her children (quite badly, if you believe her offspring). Hidden talents include the gift of justification and the ability to drink massive amounts of caffeine and still fall asleep within two minutes. Her lack of the sense of smell allows her to perform many unspeakable tasks. She has six children and hasn’t lost her sanity—or so she leads you to believe. For more information about Denise, please visit her at www.denisegroverswank.com.