Crafting a heroine-when is it too strong or too weak?

Congratulations to "Melissa N.", the winner in Desiree's giveaway. Thank you to all who participated!

First of all you should know that I grew up reading mysteries. My mother and sster were avid readers but they did not read romance of any shape or form, only classics like Agatha Christie.  In my head I always believed that when I sat down to write, finally, I would write a mystery. What else, right? I even had it all plotted out.
But a funny thing happened on the way to finishing the book – I couldn’t get past Chapter Three. The story just would not flow, either from my brain or my fingers. So in 2004 I read a romantic suspense for the first time and I thought, This is what I was meant to write. Romantic suspense.
I was so excited. I sat down and began to write at once. Of course, I knew nothing about stuff like GMC, big black moments, POV or any of the other structural necessities to create an engaging g story. I just sat down and wrote. I tell you now, it was five years before that book was actually contracted. In the meantime, however, I learned something very valuable—for whatever reason, I could not easily craft an appealing heroine.
Oh, you say, that should be easy. Nay, nay, I tell you. And the struggle was not pretty.
In one book my heroine came from a small town and was swept off her feet by a big city, wealthy attorney.  He turned out to be very dislikeable (on purpose) and controlling. I wanted to show how heroine, swept off her feet by him, discovered on their wedding night exactly what life with him would be like. But she stuck to the marriage, had three children, and only later on was able to blossom as a woman and a person. I had an avalanche of emails telling me she was too weak, too whiny, it took her too long to stand up for herself. Apparently I failed to get the message across that a lot of it had to do with the way she was raised and it took her a long time to find her footing.
So then I plotted a book where my heroine was (to my way of thinking) smart, self-confident, in control of her life. I was floored by the new bushels of email asking me why I wrote such a bitch and they could not relate to a hero who would think himself in love with her.
By this time I was wondering if I’d ever write a heroine that readers would like, never mind love. Talk abut frustrating and discouraging. And then one of my friends said, Write about someone you’d like for your best friend. Someone you can both admire and feel sorry for without pitying. Someone who does things you’d like to if you were her. Someone whose story you’d want to read about again and again.
I backed off all my work min progress and did a story outline then wrote a 1500 word story based on it. You wouldn’t believe how many hours I put into that short little piece. I asked author friends to read it and give me feedback. I asked a few select readers to do the same. And I learned something as I went through this exercise, something I’d never thought of before. I learned to put myself in the heads of the other three characters and feel how they reacted to her. It was a mind-numbing but enlightening experience.
And my heroines began to turn into people who appealed to my readers. Whether they were down on their luck without many options or really together women, I was able to tell their story. To remember that everyone has both a weak and a strong side, a pleasing and a bitchy side. And even when I was angry at my heroine I could still like her.
Since then I have written more than two hundred books and novellas and I have continued to get good feedback on my heroines. And I still write romantic suspense, because it is. After all, my favorite genre. I have four major romantic suspense series going at the moment: The Phoenix Agency, StrikeForce, Guardian Security, and Corporate Heat.  I hope you will take the time to check them out.
And be sure and tell me what you think of my heroines! 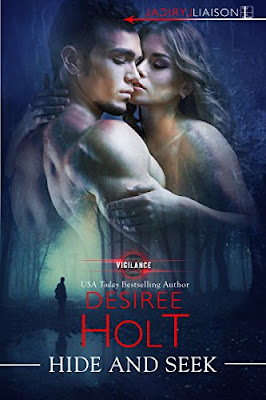 Anything can happen when you let your guard down . . . After receiving a violent threat on the heels of her father’s disappearance from the town of Arrowhead Bay, Devon Cole fears for her life—until Vigilance, a local private security agency, steps in to shield her from danger. Although she isn’t usually quick to surrender her freedom, she has no problem stripping her defenses for her new sexy bodyguard . . . Tortured by the painful memory of lost love, Logan Malik is determined not to fall for a client again. So when he’s tasked with watching over Devon day and night, he’s focused on doing his job. Day is no problem, but as tensions rise at night, nothing can protect them from giving in to unbridled passion . . . “Hide and Seek combines hot romance and thrilling suspense in Desiree Holt’s new sizzling romantic suspense series.” —Allison Brennan, New York Times bestselling author of the Lucy Kincaid series

Giveaway:
Desiree will be giving away a digital copy of HIDE AND SEEK to one lucky reader leaving a comment or email entry.

Giveaway ends 11:59pm EST January 7th. Please supply your email in the post. You may use spaces or full text for security. (ex. jsmith at gmail dot com) If you do not wish to supply your email, or have trouble posting, please email maureen@justromanticsuspense.com with a subject title of JRS GIVEAWAY to be entered in the current giveaway.