Congratulations to "Colleen C.", the winner in Desiree's giveaway. Thank you to all who participated!

Former Delta Force team leader Grey Holden came from a long line of military who believed the important thing was getting the job done, not your ego. They called themselves Omega Men. Athena Madero, left the police department angry at all the restrictions she faced as she tried to fight crime. They collided, literally, when both were working a covert investigation, the resolution of which resulted in the birth of The Omega Team. Others will join them as the agency expands its scope of activities, everything from hostage negotiation to hostage rescue to industrial espionage to fighting drug cartels to threats to national security. They will be led by Grey and Athena, whose passion for their work is only rivaled by their passion for each other. Welcome to a series that combines high danger with intense passion and heady romance. Are you ready to play? 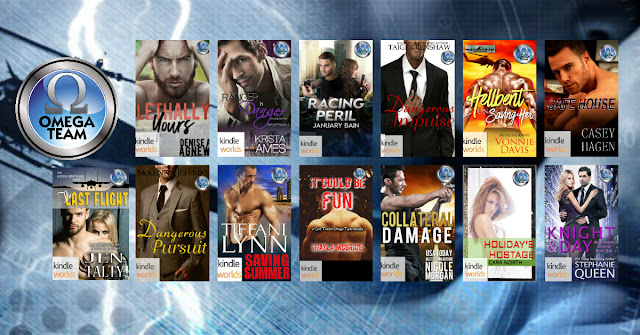 Kindle World books are written by other authors who, through arrangement with Amazon Kindle Worlds, have permission to use Desiree’s characters and settings. Meet a few of these authors and find out where they got their inspiration for their new Omega Team Kindle World stories.

I thoroughly enjoy writing former military characters who have weathered a lot of storms. I like writing heroes and heroines who have been resisting their attraction for a long time. —Denise A. Agnew, Lethally Yours

Oddly enough, my inspiration starts by selecting the title first and then creating the cover. Unless I have a specific prompt, I start all my stories that way. For this one I wanted to stick with a soft-hearted man with a die-hard military belief to protect and serve.  —Krista Ames, Ranger in Danger

My husband has been the inspiration for all the heroes in my stories. And when this amazing opportunity came along to share with all of you a tale of strife and redemption, I jumped on board, wanting to share the awesome journey of Silk and Jake with all of you. A journey that tugged at my own heart, for they had been through so much separately and I desperately wanted them to find their happy-ever-after. Together!  —January Bain, Racing Peril

Former SEAL commander and now head of Black Eagle Ops Zane Quinlin, known as ZQ, has been a bit of a matchmaker for his men. Yet he dates only occasionally. Why is he distant with other women? When Desiree was looking for writers for this installment of Omega Team stories, I wondered if this might not be a cool way to tell about a woman he once loved and lost touch with during a mission to Afghanistan. When I emailed Desiree to see how she'd feel about my bringing my team in with Grey and Athena to help rescue Athena's best friend. Desiree was all for it, bless her generous heart. There are two reasons why ZQ is HELLBENT ON SAVING HER. —Vonnie Davis, Hellbent on Saving Her

I loved the idea of a safe house because it forces proximity and extreme danger. I added the child to the mix as kind of a take on the movie, The Client.  —Casey Hagen, Safe House

When I sat down to plot Collateral Damage, I became inspired by the idea of a hero that gave up everything for his country. And I mean, literally everything. I don't want to give too much of the plot away, but my main character, RJ, is thought to be a deserter who abandoned his team and his country. This story will show that he is anything, but.  —Nicole Morgan, Collateral Damage

I knew a Marine with the last name Holiday and I like when I can have a double entendres, so I did a Christmas story with a character named Holiday for this December release.  —Cara North, Holiday’s Hostage

Reading Desiree's Omega Team book 1, Raw Edge of Danger, was a big inspiration in creating my main character, Joe Knight. I wanted Joe to be forced to partner with Ariana Day--the last woman on the planet he ever wanted to see again. But from there my mind spun out of control and I have no idea where the heck the story I ended up with came from!  —Stephanie Queen, Knight & Day

The Last Flight is the third book in the SARICH BROTHERS series and is Ramey’s story. The idea came from listening to a friend tell stories of being a test pilot and I thought that would be fun to write about, especially if someone was trying to sabotage the flights or kill Ramey. Tequila, our heroine, is from the Omega Team and is a former test pilot herself. These two are cut from the same cloth: dare devils, a tad arrogant, and try very hard not to fall in love.  —Jen Talty, The Last Flight

Omega Team Kindle World stories are available on Amazon and through Kindle Unlimited.

Giveaway:
For a chance to win ebook copies of Desiree’s Omega Team series, comment with your favorite military or action-adventure romance trope.

Giveaway ends 11:59pm EST December 15th. Please supply your email in the post. You may use spaces or full text for security. (ex. jsmith at gmail dot com) If you do not wish to supply your email, or have trouble posting, please email maureen@justromanticsuspense.com with a subject title of JRS GIVEAWAY to be entered in the current giveaway.
Posted by Maureen A. Miller at 12:30:00 AM