My Love Affair With Serial Killers

When I was in elementary school, I didn't play with dolls—the only doll I was concerned with was Chucky.  The red-haired one with the butcher knife.
In (probably) a spectacular display of parental incompetence, my mother took me to see Child's Play 3 at the drive-in theater.  It was in September 1991, and I was going to start second grade the very next day.  A last-hurrah of summer, one last night of fun before I had to buckle-down and endure the rigors of multiplications tables and  spelling tests.
That started my love of horror movies, which evolved as I got older (and got tired of horror movies) into my current love of Forensic Files and Criminal Minds.
Serial killers.  I can talk BTK and Green River Killer all day long.  Another formative moment in my youth was when my mom and grandma took me along when they drove by the Long Beach house of Randy Kraft (AKA the Freeway Killer) like some tourists doing a bus tour of celebrities’ homes.
It stands to reason that I love to write about serial killers.  My favorite chapters to write are the ones from the killer’s point of view.
You allegedly get a squirt of dopamine when you hear about their heinous crimes, a primitive survival mechanism to enable you to seek out safety.
From a psychological perspective, Serial Killers are fascinating because they are the most extreme embodiment of the id.  They torture and kill solely for their own pleasure.  They don’t kill for ‘logical’ reasons.  They kill because it makes them feel good.
To me, they’re one ingredient in the perfect recipe for a novel.
A seemingly unstoppable, intelligent and brutal killer.  The woman he’s obsessed with.  And the man who would stop at nothing to protect her.
What better time to fall in love?

Why do you think we're so obsessed with serial killers? Leave a comment below! 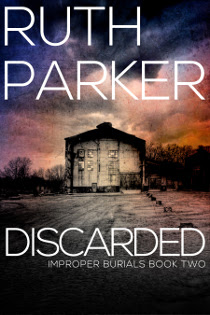 DISCARDED
He would do anything to keep her safe. Except tell her the truth...

Detective Deborah Turner is pissed. Her friend and corrections officer is found dead in a landfill—and the prison staff are hiding something.

Prison Officer Jamie Brock—a man she knew for one wild, passionate night—is her only ally. As Turner digs deeper and threatens to unearth the prison's darkest secrets, she finds Jamie Brock at the center of it all.
Her heart wants to trust him, but her brain screams for her to run the other way. And behind the barbed wire and towering concrete walls, she's about to find out that some secrets are worth killing for…
AMAZON
BOOK EXCERPT
Detective Deborah Turner declined a ride in the golf cart. Declined to answer Brock’s questions. Declined to even look at him. She didn’t know what to do—and she didn’t like that one bit. She was used to getting things done. Any problem, she could attack head-on, figure out a way to make things happen. That was what she was trying to do in this murder investigation. When the warden had shrugged her shoulders, said sorry we can’t help, Turner had not accepted that. That was what made her a good cop. She never took no for an answer.
She always knew what to do… except with Brock. That man was a different story altogether. She had no idea what to do about him.
He’d spoken one word—detective—in that silky smooth, deep voice and she’d felt like the floor had dropped out from under her. The bass in his voice was like a tremor that wiggled down her chest and bloomed between her legs in a paralyzing agony of heat and desire. One word from him had been able to cut through her anger and frustration and melt her to the core. It had been months since she’d been with him, but she remembered perfectly what it had felt like in her dark bedroom, his lips gently grazing her ear as he spoke filthy things to her.
“Deborah,” he said. He was trailing behind her, waiting for her to stop so they could talk. That was too bad. She did not want to talk to him. Not about the case—and certainly not about their night together.
In his olive drab uniform and boots, he seemed to tower over her—which was rare, as she was a very tall woman. He looked like he was ready to kick ass and take names, hard and lean and full of masculine energy—just the sort of guy she craved. Ugh, she thought, why did it have to be him?
“I’m leaving now,” she said. “But I’m going to come back with the damned National Guard if I have to.”