A WAR OF HEARTS 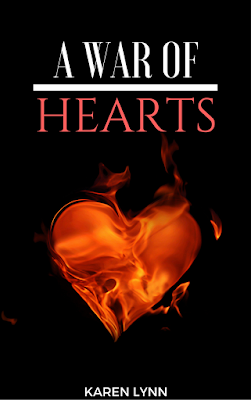 Three troubled souls tangled in a web of obsessive love.

Logan is poison and Kristen knows it.

She has developed a hatred for his decadent increasingly risqué lifestyle. Yet every time she tells herself she’s done, she never is. His hypnotic power over her draws her back like an addiction.

Logan’s tenuous grip on reality is crumbling. He feels like he is reaching out for an elusive source of fulfillment. Sometimes he finds it in deviant sex, alcohol and drugs. Other times there is only darkness.  Rich, powerful, handsome, he could have anyone he desires. But he’s obsessed with Kristen and will not let her go.

Jake is a struggling artist with a powerful determination to follow his dream. But he is another beautiful mess. On a quest to find happiness and rebuild his life, he longs to escape the shadows of his past. But first he must defeat the unrelenting nightmares in his head.

When fate brings Kristen and Jake together, it rattles their worlds. Love is not in their plans that day in Central Park, but there is no going back.

When jealousy and explosive passion erupt into dark obsession, vengeance is all that is left.

Jake wasn't diffusing fast enough. He was dying to know what Logan's real motive was, and then he wanted to rip him apart. Kristen, could feel it and tried to pull him away. He wouldn't budge. Logan sighed, then lowered his head dejectedly and started walking away.
"Hey!" Jake called after him, heading towards him. Logan stopped. Turning slowly, his eyes arrogant, he waited, until they were face to face.
"If I ever catch you near Kristen again, I'll fucking kill you!" Jake hissed, his eyes on fire with hate.
It was a kind of hate that Kristen had never seen in him before and it terrified her. She stood next to them, fidgeting nervously.
Logan gave him an apathetic half grin. Raising his hands in a gesture of surrender, his eyes glazed.
Jake's concentration turned to Kristen. "Did he hurt you?" he asked, wanting her to affirm it to give him a reason to tear into Logan.
"No," she mumbled, close to tears. This is not how I pictured our last night out.
Jonny was back beside them, waving them into his office. Jake shook his head with disdain, grabbing Kristen's hand as they followed him. His eyes fell on the bracelet he'd given her, and softened. By the time they sat down in front of Jonny he was chilled out significantly and Kristen laid her weary head against his arm.
"I think you guys need a smoke.” Jonny’s tight lips stretched into a smile. He lit a joint and passed it to Jake. "So what's the deal here? You and that guy getting divorced or what?" He focused on Kristen. Jake stiffened, letting out an uncomfortable sigh.

ABOUT THE AUTHOR
Karen Lynn, a native New Yorker has always loved writing poetry and short stories with intense characters struggling to find love and survive in a troubled world. After years of working in the legal field, Karen moved with her son to Oregon. Inspired by the rain and Portland’s creative culture, Karen has been able to follow her dream of writing novels.
A War of Hearts is her debut novel in this dark romantic suspense series of the same name.