The Forgotten Past and the Unknown Future

With every year that passes, I find myself grasping more and more for the most random details. If I’ve made a grocery list and I forget it at home, do you think I’m going to remember everything that’s on that list while I’m at the store? Heck, no! If I have a to-do list of fifteen items, I have to write everything down or I’m bound to forget at least six of them. And don’t even consider asking me “what happened in the previous episode?” if we’re watching a TV show together. That’s what the recap is for! I don’t have the mental space for that!
But honestly, it’s not so bad. I still have the lyrics to every single late 90’s pop song in my head, as well as the entirety of Robert Frost’s poem “The Road Less Traveled,” which I was forced to memorize in fifth grade. 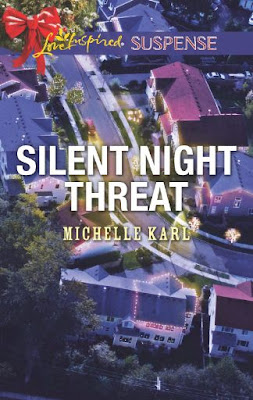 All of these details are minor and easily navigated—nothing like, for example, waking up to find yourself lying on the side of the road with a gun near your hand and zero memory of how you got there. Or who you are. Or who that strange man is who’s running toward you wearing a shirt with bright yellow lettering that says ‘FBI’…

In my latest release, SILENT NIGHT THREAT, I wanted to explore the unknown in a different way—after all, when it comes to suspense, the external threat is often the most prevalent element of the unknown, but I decided to add another layer and force my main characters to confront an internal unknown at the same time. What would it be like to be dodging bullets, running for your life, and trying to protect a child you barely remember while you’re practically a stranger to yourself?

And what would it be like for the person who loves that individual, trying to protect her while she has no idea who he even is or how their lives are intertwined?

It’s one thing to live in suspense and fear when enemies are coming after you from all sides. It’s quite another when the attack comes from those enemies and from inside your own mind!

Listen, I’ll gladly take my forgotten grocery items or the hazy plot details of last week’s episode of Wynonna Earp any time over amnesia and weaponized aerial drones. The future is unknown enough without losing all my memories… but just in case that ever happens, I’ll keep taking obnoxious photos of my food for social media and posting inane tweets about what my cat is doing.

Hey, I’m just looking out for my future self!

GIVEAWAY:
What strange thing can you never seem to remember? A phone number? Your socks? Your brother’s dog’s birthday? Tell me about it in the comments!

Commenters will be entered into a giveaway to win one copy of SILENT NIGHT THREAT!

None of her training prepares astronaut Natasha Stark for what she wakes up to three weeks after her groundbreaking space voyage: a target on her back—and no memories. But there's something oddly familiar about the FBI agent who rescues her. Christopher Barton can't believe he drew the mission of safeguarding his long-ago fiancée and her daughter—a child he has every reason to believe is his. To learn the truth, though, he has to help Natasha regain her memory. But with threats mounting against the family he hopes to join, Chris is running out of time to take down the assailants before they kill the woman he never forgot and the child he never knew existed.

About the Author
Michelle Karl is an unabashed bibliophile and romantic suspense author. She lives in Canada with her husband, a co-dependent cat, an unflappable bunny and an opinionated parrot. When she's not reading and consuming copious amounts of coffee, she writes the stories she'd like to find in her 'to be read' pile. She also loves animals, world music, and eating the last piece of cheesecake.

Giveaway ends 11:59pm EST November 18th. Please supply your email in the post. You may use spaces or full text for security. (ex. jsmith at gmail dot com) If you do not wish to supply your email, or have trouble posting, please email maureen@justromanticsuspense.com with a subject title of JRS GIVEAWAY to be entered in the current giveaway.