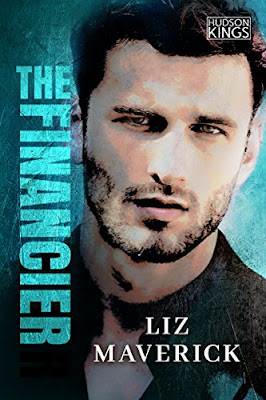 Nick Dawes just had to go and prove something to himself. The brilliant moneyman of the Hudson Kings is in deeeep trouble after losing $20 million during a “freelance” heist, and now a Russian crime boss wants the money and Nick’s head. Nick needs to make himself scarce—and find someone to babysit his fish. Someone like lush, gorgeous Jane MacGregor, who might just be the death of him . . .

After being swindled by her jerk of an ex, Jane can’t say no to house-sitting a luxurious Fifth Avenue penthouse. The only downfall—aside from Nick’s tendency to show up covered in bruises and blood—is an increasingly strong attraction to her superhot and expensively suited-up new boss. Never make the same mistake twice.

But when Nick’s dangerous profession crashes in on Jane’s quiet little world, all hell breaks loose. And Jane is about to find out just what kind of man she’s falling for.

Excerpt:
From the moment they left the car in the courtyard and entered the building, chaos ensued. Jane and the puppy followed Cecily and her boyfriend, Shane, into a room that Jane managed to register as being full of very, very attractive men. Ally suddenly dropped back behind Jane. A waifish redheaded girl in a black jumpsuit launched a mile-a-minute speech at a muscular guy wearing a band T-shirt about how inappropriate it was that “civilians” were all piling into the “war room.” At least it sounded like she said “war room.”

Through the drama Jane finally pegged Mr. Dawes leaning against a desk next to a guy she recognized from photos as Cecily’s brother Dex.

Jane had fully intended to lead with an admittedly pissy-sounding take on the phrase “Say hello to your new dog, Mr. Dawes!” But when he stood up and came toward her, she realized he looked like death. The most beautiful, bruised, sad, sexy version of death you could ever imagine. He was just a mess of bruises, cuts, and bandages, plus he had an end-of-the-road look in his eyes that just cut her to the bone.

“You look terrible,” she blurted instead.

“Yesterday was a rough day.”

“Yesterday I called and yelled at you,” Jane said.

“Yeah, that was actually a highlight,” he said.

Jane stared at Nick; he stared back at her. And then he smiled.

“This is where you work?” she asked. “The Armory?”

It was then Jane noticed that the dog wasn’t pulling against her hold anymore. The dog was sitting by Mr. Dawes’s feet, tail wagging, excitedly nuzzling the pocket of his cargo pants like he expected there to be a treat therein. Mr. Dawes was still staring at her, but his hand was absently petting the dog’s head. They looked . . . suspiciously . . . like . . . old friends. “You’ve already met,” she said.

“Yeah. This is Rochester. My neighbor’s dog.”

A sinking sensation pooled in Jane’s stomach. “You didn’t order a new dog.”

Jane winced. She could feel herself getting hot all over, and not in a good way.

“I’m aware that extreme embarrassment is not my best look.”

“I’m not looking my best either,” Mr. Dawes said.

Jane’s eyes went back to examining the damage to his face and body. “Dangerous people?”

“It’s my problem alone. It’s not going to touch you, Jane,” he said very seriously.

“I wasn’t thinking that,” she said.

He relaxed a little.

“I’m sorry. I misinterpreted.” She gestured lamely to Rochester, who was pawing at Mr. Dawes’s abdomen, clearly hoping for a tussle. “He came with a suitcase and a lady who looked like a breeder or something.”

“I like to dog-sit. Especially like goldens. Known Rochester since he was weaned. He’s almost a year old now. My neighbor doesn’t give me notice anymore—just comes over, and if I’m there, I’m there. If I’m not, she takes him to someone else or boards him. Guess you were there, so . . .”

He likes to dog-sit. Jane watched as Mr. Dawes led the dog into an adjacent conference room, knelt on the ground and started playing with him. It was a display she would have liked to enjoy from the comfort of a plush velvet chair, with a bucket of popcorn—yes, butter, please. Unfortunately, that was not to be.

The redhead made her way over to Jane’s side, giving unusually wide berth to an Ally-Dex conversation as she passed. She’d obviously made peace with the situation in the, uh, war room, because she said to Jane in a friendly enough voice, “Hi, I’m Missy.”

“I’m Jane. Mr. Dawes’s fish sitter. Well, I think I got a promotion to pet sitter. Although come to think of it, I didn’t get a raise.”

“I know who you are,” Missy said. “And since you’re here, I need to make sure you’re cool with everything.”

Jane got the impression that meant a lot of things. Not just “Jane, are you okay with the weirdness?” More like “Jane, we need to feel okay that you know about the weirdness.” Though Jane couldn’t imagine what would happen if the answer ended up being no.

So, she and Missy talked for a while, each of them keeping one eye on the Nick Dawes Show playing live through the glass windows of the conference room. Missy asked her a lot of questions, which Jane had no trouble answering. Questions that basically took the pulse of how comfortable Jane was with how much she already knew, or which prodded Jane to reveal additional information that perhaps she shouldn’t know but had figured out.

Missy also asked her not to leave the room without an escort. If Jane was supposed to think this was all too strange and suspicious to deal with, these people were going to be disappointed. And they should know better; they’d already “vetted” her for Nick Dawes’s job and obviously decided that her questionable parents weren’t enough to keep her from being invited into—if not the inner circle where Ally and Cecily lived—at least one of the rings next to it. Weirdness is relative, thought Jane. I am not one to be spooked.

She suspected there was an intersection between her boss being a mercenary in one part of his life and some sort of investment banker or fund manager in the other. She knew Cecily’s fiancé, Shane, had skills in a variety of areas, including stunt driving and hand-to-hand combat. Mr. Dawes undoubtedly did tricky things with money. Hopefully, he did not steal from the poor and elderly, because that would be a deal breaker. Not that she had any business wondering what her deal breakers with her boss would be in the first place.

The more Jane listened to Missy talk (vaguely) and ask questions (pointedly), the calmer she felt. Nick Dawes might be a white-collar mercenary with the ability to use his expertise for things Missy referred to as “gigs” and “missions,” but he also liked to roll around on the floor and snuggle with a dog.

Roll around. And snuggle.

Live and let live, Mr. Dawes. If you expect me to have concerns about your mercenary ties, you are sorely mistaken.
***

Author Biography
Liz Maverick is a bestselling and award-winning author and adventurer whose projects have taken her from driving trucks in Antarctica to working behind the scenes on reality-TV shows in Hollywood. Known for her smart, funny, and emotional romance novels with fast-paced plots, Liz has written more than fifteen books. Her bestselling book Wired was a Publishers WeeklyBook of the Year, and Liz also created the USA Today bestselling Crimson City series.

Liz currently lives happily ever after in Brooklyn, New York, with her daughter and husband, and loves to stay in touch with readers through her website, www.LizMaverick.com.