WHY DO DANGER AND ROMANCE MAKE SUCH SEXY BEDFELLOWS?

Congratulations to "Deborah H." the winner in Becky's giveaway. Thank you to all who participated! 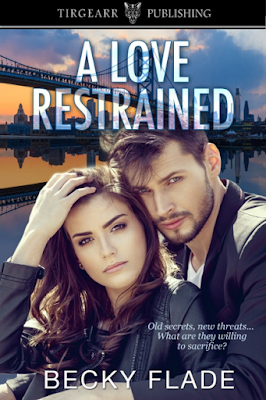 Face it, where danger lurks, romance certainly follows. At least between the covers of most romance novels. But why?

Let’s break it down; take out the romance and what’ve you got? Suspense.

Any book with a suspenseful plot engages the reader. You become emotionally invested in the outcome. Your heart pounds as the hero/heroine approaches the door behind which you know the villain waits. You cheer when the villain falls. Happiness abounds.
It’s not unlike the emotional phases of falling in love.

Per an article in Psychology Today from February 2013, the physical reaction to falling in love includes the release of neurotransmitters narrowing your focus and dopamine to make you happy you did.

Add an element of romance and not only are you reading about two people falling in love but thanks to the suspense you’re FEELING it too.

Or maybe they’re just a lot of fun to read.

WHY DO YOU THINK ROMANTIC SUSPENSE WORKS SO WELL?

Giveaway:
Comment with your opinion below and JustRomanticSuspense.com will select someone at random to win a $5 Amazon gift card.

Old secrets, new threats...What are they willing to sacrifice?

Philadelphia police officer Kylee Parker is dedicated to protecting and serving. She sees the work in absolutes: right and wrong, black and white, good guys and bad guys. That is, until she chases a drug dealer into a dead-end alley and finds the bad boy she had a painful crush on throughout her teen years has turned into a more dangerous and more attractive man.

Jayson Donovan knows he doesn’t deserve someone as good as Kylee Parker. As the right hand man to a local drug-pushing mobster, he’s solidly on the wrong side of Kylee’s moral compass. But he can’t help reaching for her time and again when he knows he shouldn’t.

Even when his secrets threaten them both.

Spring in the city brought people out of winter hibernation like a siren song, but as the temperature rose, so in turn, did the crime rate. Cops had to be sharp as they walked the streets of Philadelphia. In her ten years on the force, on these streets, she’d seen a lot of crazy and often stupid criminals do a lot of crazy and often stupid things. But to be so brazen, or so plain dumb, as to do a hand-to-hand drug buy right in front of two uniformed officers rode high on her list of top ten.

“Saw what?” Hunks of half chewed soft pretzel fell from Sherman’s mouth.

Pete Sherman’s not a bad cop, just not an observant one whose paunch portrayed his love of all things fried and his reupholstered recliner. He hadn’t seen a thing in the last six months. But he took direction well, despite the fact he had seniority.

“There, across the street.” She pointed. “The junkie walking east just scored off the guy in the leather bomber heading west. I swear the dealer looked right at us before the exchange. Call it in, Pete, and grab the junkie. I’m going after the dealer.”

Sherman didn’t argue. She took off into a quick lope, kept her footsteps light so as to not alert the man she pursued. The spring day had drawn people out and the complaints of the pedestrians she weaved through grew loud. The guy glanced over his shoulder, and the edge of his mouth tipped into a grin before he sprinted around the corner.

“Cocky jerk.” She turned the corner, and shouted, “Stop! Police.”

She ran clean and fast, closing the distance between them with little effort. The dealer ducked into an alley she knew to be a dead end. She slowed and put one hand on the butt of her service pistol as she approached. He had his back to her, his hands on his hips as he stared at the brick wall in front of him.

“Philly PD, you’re under arrest. Slowly put your hands above your head and against the wall to your left.” She closed the few feet between them, using her free hand to release the handcuffs from her belt, the other remaining on her weapon. She cuffed him, with practiced efficiency, and then read him his rights before leading him out of the alley, preferring to do the pat down with her partner present.

“Kylee Parker, I’ll admit I daydreamed a time or two about you cuffing me, but it was never in this context.”

About The Author:
Becky has been writing stories since kindergarten. But it wasn’t until she found her very own knight in slightly tarnished armor that she took the leap in to publishing. And hasn’t looked back once. In addition to being a wife, mother and grandmother, she works as a legal professional when she’s not writing, reading or dancing. And Becky’s proud to tell people she’s making her own dreams come true one happily ever after at a time.

Giveaway ends 11:59pm EST October 5th. Please supply your email in the post. You may use spaces or full text for security. (ex. jsmith at gmail dot com) If you do not wish to supply your email, or have trouble posting, please email maureen@justromanticsuspense.com with a subject title of JRS GIVEAWAY to be entered in the current giveaway.
Posted by Maureen A. Miller at 12:30:00 AM