Secrets Hidden In The Glass 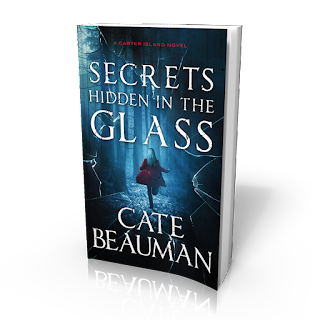 Bestselling author Cate Beauman is back with her 12th full length novel and her first stand-alone title: Secrets Hidden In the Glass.

Stained glass artist Callie Davis is in desperate need of a vacation. Burnt out and on the edge of a nervous breakdown, she’s fleeing the pressures of her career and is taking refuge on Massachusetts’ tiny Carter Island. Callie yearns for long, lazy days and pretty walks on the beach—blessed solitude and an escape from the complications of her life. Then she bumps into gorgeous Nate Carter and everything changes.

Sheriff Nathan Carter couldn’t be happier now that the height of the summer season has finally come and gone. After four endless months, tourists have packed their bags and headed for the mainland. The quiet days of autumn are about to befall the town—the way Nate and his fellow Sandersonians like it best.

But nothing ends up quite the way Nate expects when he meets the beautiful blonde with the big blue eyes. Callie’s pretty smiles hide secrets—deep, dark mysteries that could cost them both their lives if they continue digging into the past and cross a killer’s path.

The Inspiration Behind Secrets Hidden In The Glass:
I always find the process of writing fascinating—imagining words and thoughts into subsistence that had once only existed in my head. Oftentimes, the undertaking is daunting. Months of research, careful plotting, planning, character development, and revising go into every page. There are many moments of doubt and worry. On occasion, there’s even a triumph or two. But finally, you type The End and you realize you’ve created a miracle of sorts—a story to share with your eager readers who are always waiting for what’s next.
I had such fun telling Nate and Callie’s adventure. There was something extra enjoyable about bringing Sanderson, Massachusetts to life—the fictitious, tiny town on the equally made-up Carter Island. Imagine dreaming up a beachy setting that gets to be exactly what you want it to be. Add a group of intriguing (and on occasion quirky) characters. Throw plenty of steamy romance and several sprinkles of mystery and suspense into the mix and you’ve got yourself one heck of a good time.
I hope you’ll enjoy Secrets Hidden In The Glass as much as I enjoyed telling it. 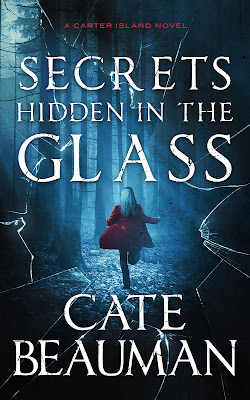 Read an excerpt from Secrets Hidden In The Glass:

Callie stood next to the grease-smudged door, sucking her thumb and clutching Emily Dolly close in the crook of her arm. Tinny music played through cheap speakers as she stared at the big man sitting in a booth across the room, snoring with his chin touching his chest while the food on his plate went cold. Glancing around at empty tables and chairs, Callie recognized that she was in a restaurant. Mommy took her out to eat sometimes, but she’d never been to this place before. She flinched and her gaze flew to a set of metallic doors when a woman with bold red hair pushed them open and walked from the kitchen.

The woman stopped abruptly and rolled her eyes as she looked toward the man, who sounded like a pig. “Good grief, I need to get off this midnight shift.” The woman shook her head, grabbing a washcloth from a bucket, then wiped down the long counter top. Her dangling hoop earrings caught in the light while she hummed along with the radio and wiggled her hips in the pink skirt she wore. After tossing the cloth back into the bucket, she picked up a stack of menus and turned, gasping when she made eye contact with Callie. “Dear God in heaven,” she said as her free hand flew to her chest. “You scared me half to death.”

Callie gripped Emily Dolly tighter and stepped back, bumping into the cool glass.

The woman frowned as her gaze tracked around the room. She set the menus on a table, walked over, and crouched down in front of Callie. “Sweetie, are you alone?”

Callie tried to move farther away but there was nowhere left to go.

“You don’t have to be afraid of me.” She smiled and stroked her fingers down a lock of Callie’s long blond hair. “I work here.”

Callie stared into the woman’s green eyes while her stomach twisted and turned and felt yucky.

“Let’s see if I can find your mommy.” The woman gained her feet and walked down a short hallway, opening a door. “Hello?” She moved a few steps and turned another doorknob, doing the same thing. “Hello?”

The woman came back and pushed through the door Callie stood by, letting in the sounds of the cars driving by as she walked off into the dark. Moments later, she came back inside, hurrying over to the man in the corner, shoving on his arm. “Hey.” She did it again. “Hey, you.”

The man snorted as his eyes flew open. “Jeez, lady. What the hell?”

“Is that your little girl?” The waitress pointed in Callie’s direction.

The man turned his head, looking at Callie. “No, that’s not my little girl.”

The woman’s hand ended up on her hip. “Did you see her come in with anyone?”

He stared at Callie a second longer and shook his head. “I’m seeing her for the first time right now.”

“Well, where did she come from?”

He shrugged. “Beats me.”

The waitress walked back to Callie, crouched down again, and sent her another warm smile. “Can you talk?”

She took her thumb out of her mouth. “Callie.”

“Do you know how old you are?”

Callie’s breath shuddered in and out when her tummy felt yucky all over again. “I don’t know.”

She blinked rapidly and tears trailed down her cheeks. “I don’t know.”

“Oh, good heavens.” The woman picked her up and hugged her close. “Everything’s going to be all right.” She walked toward the metallic doors and pushed her way into the big kitchen. “Earl, call the police. I think we have an abandoned child on our hands.”

Did you enjoy the excerpt?  You can read the first chapter on my website, www.catebeauman.com, or you can finish the whole book with the links below!

The Unofficial Secrets Hidden In The Glass Soundtrack

I love music! I can’t imagine a world without catchy tunes playing, especially when I’m writing. Music is inspiration. Melodies, beats, and the mood of each song help me portray emotions and feelings as I tell a story. It’s a rare day when I don’t have my headphones in place, bopping my head, while my fingers race across the keyboard. You can listen to the “soundtrack” for each book on my website www.catebeauman.com.

About the author:
International bestselling author Cate Beauman is known for her full-length, action-packed romantic suspense series, The Bodyguards of L.A. County. Her novels have been nominated for the National Excellence in Romance Fiction Award, National Indie Excellence Award, Golden Quill Award, Writers Touch Award, Aspen Gold Award, Heart of Excellence Award, and have been named Readers Favorite Five Star books. In 2017 FINDING LYLA was chosen as the Booksellers Best Award Winner, the Maggie Award For Excellence, and received the Holt Medallion Award. REAGAN'S REDEMPTION and ANSWERS FOR JULIE were selected as rare co-winners of the Aspen Gold Award in 2016. JUSTICE FOR ABBY received the 2015 Readers' Favorite International Book Award Gold Medal, while SAVING SOPHIE took the Silver Medal. SAVING SOPHIE was also selected as the 2015 Readers Crown Award winner for Romantic Suspense and FALLING FOR SARAH received the silver medal for the 2014 Readers' Favorite Awards.

Cate makes her home in North Carolina with her husband, two boys, and their St. Bernards, Bear and Jack.