Congratulations to "LibraryPat", the winner in Terry's giveaway. Thank you to all who participated!

I’m delighted to share the release of Identity Crisis, Book 7 in my Blackthorne, Inc. series. It’s a bit of a departure, but I realized that most of the characters in the series had already found their happily-ever-afters, not to mention they were getting a little  old for all the covert ops work. I decided to introduce some new faces, beginning with Brett “Scrooge” Cashman. 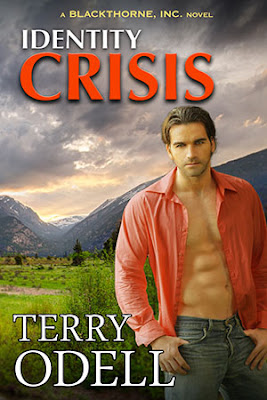 Not following orders might cost him his dream job, but it could save her life.

Brett Cashman yearns for a job as a Blackthorne, Inc. covert operative. He has the skills, but as one of the only recruits with no military background, he’s having trouble adjusting to the whole taking-orders gig.

Holly Granger ran away from her wealthy daughter-of-a-rock star lifestyle in her teens, when she couldn’t face the notoriety. An accusation of treason, and an apparent chance encounter with Brett sends Holly into what she considers an alternate universe. She wants no part of it, but when it’s obvious someone is threatening her safety, she reluctantly accepts Brett’s protection.

Another order Brett’s having trouble following—Blackthorne’s number one rule: “Do not get involved with the principal.” Can he follow the rules, or will his attraction to Holly cost him his chance to become a Blackthorne operative?

Brett darted for the fallen tree he’d selected as his next stop on his way to the cabin and dropped to a knee. If Adam wasn’t responding, Brett would go up the ladder—all the way to San Francisco. They were supposed to be monitoring the situation, right? He keyed his radio. “Command, this is Scrooge. I’m going in.”

A woman’s voice pierced the air. “Get your hands off me!”

And let the woman be tortured? Killed? Brett couldn’t accept that. Knew he couldn’t live with himself if his inaction was to blame. An explosion shook the ground beneath him. Smoke billowed from a window on the west side of the cabin.

“Command. Explosives and fire. Shall we engage?”

“You’re breaking up, Command,” Brett growled into his mic. “Did not copy. Repeat. Scrooge going in.”

Maintaining a crouch, Brett hauled ass for the cabin. He wasn’t even going to think about picking the lock. Weapon raised, he kicked at the door, which fell into the cabin with a resounding crash. Smoke filled Brett’s eyes. He blinked, seeking the hostage and her captors. 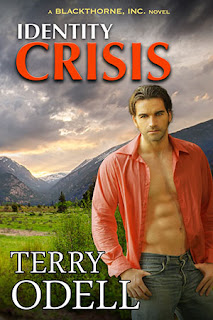 Gunfire erupted around him. Pain stabbed his arms, his legs, stung his chest beneath his vest. The room spun. Brett struggled to remain conscious, fought to maintain control of his weapon. A swift kick to his ribs foiled that plan.

**Note: In honor of my daughter, I’m donating a portion of all October royalties from Identity Crisis to the National Multiple Sclerosis Society.


To celebrate, I’ve made the digital version of When Danger Calls, Book 1 in the Blackthorne series, free. You can start at the beginning at no cost to you! All buy links are here

Giveaway:
One lucky commenter will win a hard cover, signed copy of When Danger Calls (US only, please.)

Giveaway ends 11:59pm EST October 13th. Please supply your email in the post. You may use spaces or full text for security. (ex. jsmith at gmail dot com) If you do not wish to supply your email, or have trouble posting, please email maureen@justromanticsuspense.com with a subject title of JRS GIVEAWAY to be entered in the current giveaway.
Posted by Maureen A. Miller at 12:30:00 AM