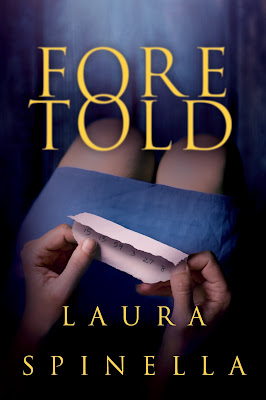 A mysterious death in a muddy swamp, missing children in different states…psychic Aubrey Ellis and her partner, investigative reporter Levi St John, have their hands full. The added strain of raising their son, who struggles with his own psychic gift, pushes life to the brink of collapse.
Enter Zeke Dublin—Aubrey’s first love from her carnival past. Tensions escalate when it’s clear that the attraction between them is alive and well. But as Levi discovers disturbing clues about the body pulled from the swamp, he begins to suspect Zeke’s sudden presence is more than coincidence.As Aubrey’s uncanny abilities take an unsettling turn, she fears that this time her own child is in danger. Who can Aubrey trust to help solve the unknowns surrounding her life—the father of her son, or a man who’s always understood the deepest secrets of her psychic gift?

Yvette opened the front door. The wheelchair rolled through, and Yvette stopped long enough for Charley to squeeze her granddaughter’s hand.

Their eyes and the warmth of physical touch disengaged as the wheelchair moved past Aubrey. Once the path was clear, she stepped out the front door. An audience was the last thing she wanted. On the neatly painted porch—pillow-lined swing, beautifully potted plants, every inch meticulously maintained—Aubrey folded her arms. She glanced down; near the tip of her big toe was a spot of chipped paint. She shuffled forward, covering it. It read like a marker of Levi’s lengthy absence.

He stopped near the integrated ramp at the bottom of the porch steps. “Are you all right?”

“What the hell happened?”

“I’ve been asking myself that for the past ten hours.”

Levi came up the steps. In her bare feet, Aubrey had to tip her chin upward. Her damp eyes blinked into his.

“You’ve, um . . . you’ve gathered quite a crowd. Why don’t we go inside? You can tell everyone the whole story.”

Aubrey nervously tucked a crow-colored lock of hair behind her ear. “I wasn’t sure . . . they took my phone. Piper said she called you. You didn’t answer.”

“I was on assignment. Crappy service. Dan called this morning. A body was found near Biddeford, Maine.”

“Yeah. Bullet to the head, execution-style murder. Not much more to report—male, Caucasian, we think . . . exposure.”

“No more so than the drug cartel we busted out of the Keys. Listen, could we . . . ?” He pointed toward the living room. “I’m not the one who found myself linked to the word ‘terrorist’ today. Forget Dan’s case. Until Piper’s call, I didn’t even know about the Prudential Tower incident. What the hell were you doing there, anyway?”

“He was in town and asked if I wanted to meet him, catch up. You know Zeke, he tends to turn up out of nowhere.”

“Actually, I don’t know Zeke at all—aside from one whirlwind visit where he blew into my living room like he owned the place. What was that, four . . . five years ago? Where was he in all of this today?”

“Nowhere.” She shrugged. “I never saw him. I warned the security guard about the explosion. From there it was bedlam, with me not-so-nicely escorted to a nearby building, basement room.” She turned for the door.

“Wait.” He touched her shoulder. “What do you mean you warned a security guard about the explosion?”

“Welcome to my day, Levi. Do you want to hear the story from the top?”

His expression grew befuddled. Aubrey recognized it. He wore the look when she first shared her gift with him—curiosity combined with a large helping of disbelief. Square one, she thought, on so many levels. Levi headed inside.

He turned back. “At home. He doesn’t know anything about today. He’s staying with the Frasers—condo next door—until I get back.”

“Home is here . . . but fine.” She hated the fact that her son wasn’t playing basketball in the driveway or in the basement working with one of his many miniature models. Worse, Aubrey still could not grasp that neither man in her life would come home to the bedrooms in their house that night. But in this moment, what could she do? She was lucky to have basic freedoms restored, to sleep in her own bed tonight. Aubrey let go of Levi’s arm and walked past him.

Inside the house, a hushed conversation between the three women petered out. Levi stopped near his chair, gripping his hands around the back. It was a meaningless action, but Aubrey read it as possessive. The chair—something Levi wanted. Something he missed. She rolled her eyes and sat on the tufted tuxedo sofa. Wonderful . . . I’m jealous of reproduction furniture . . .

“So,” Levi said, sitting too. “Expand on what you said outside. You had a forewarning about the explosion? I’m a good reporter, Aubrey; I’m not a mind reader. What happened today?”

“To be honest, I have as many questions as you do.” She sank further into the bright orange retro sofa. “On one hand, I had an encounter with an entity this morning.” Everyone in the room offered a blasé hum. “On the other . . . the spirit was a historical figure, quite famous, really.” An uptick of interest rumbled through. “But even that’s not the part that got my attention. It’s what the ghost told me that’s got me spooked.”
***

Author Biography
Laura Spinella is an East Coast author, originally from Long Island, New York. She pursued her undergraduate degree in journalism at the University of Georgia. The southern locale provided the inspiration for her first novel, Beautiful Disaster, which garnered multiple awards, including a Romance Writers of America RITA nomination. She’s also lived on Maryland’s Eastern Shore and in North Carolina before relocating to Massachusetts. She and her family currently live in the Boston area, where she is always writing her next book. Ghost Gifts is Laura’s third work of romantic fiction. She also writes sensual romance under the pen name L. J. Wilson. Visit her website at www.lauraspinella.net.