A War Of Hearts His undying passion for her will not relinquish his soul.

Kristen needs Jake. Her love for him is so pure, powerful, unquenchable.

Logan is poison and Kristen knows it. She tells herself it is the last time. But it never is.

And Logan refuses to let her go.

Logan feels like he is floating through an endless maze, reaching out for some illusive source of fulfillment. Sometimes he finds it in violence and kinky sex. Other times there is only darkness.  Rich, powerful and handsome, he can have anyone and anything he desires. Yet, his lust for Kristen tortures him. But he is convinced he cannot live without her.  And he is sinking deeper and deeper into a world of madness.

No one will ever understand Kristen’s obsessive love for Logan. His insatiable hunger for drugs, rough sex and alcohol is spiraling out of control.  Her co-workers at a NYC law firm think she is in way over her head. She is disenchanted with the decadent lifestyle he craves.  But Logan will always be her painful addiction.  Still the powerful desire to free herself haunts her.  The hypnotic hold he has over her threatens to destroy her.

Jake is a struggling artist with a powerful desire to follow his dream. But he is another beautiful mess. On a quest to find happiness and rebuild his life, he longs to escape from the shadows of his past. But first he must silence the demons in his head.

When fate steps in bringing Kristen and Jake together, everything changes.

Love is not in their plans that day in Central Park. But it rattles their worlds with instant, intense chemistry. And there is no going back.

When jealousy, explosive passion, and emotional turmoil erupt into a dark obsession, vengeance is all that is left. 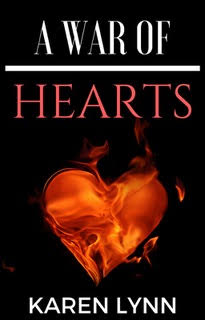 Excerpt – A WAR OF HEARTS

It was 9:00 p.m. Being alone for two hours had allowed her to fantasize about Jake a bit longer, without being propelled back to reality. Her mind and body were beginning to shut down, exhausted by the emotional stress of the day. Before too long, she began to doze off.
All of a sudden, she was jolted awake by the sound of the front door opening. Hitting the mute button on the T.V., she tried to concentrate on the muffled voices. The knife she had hidden in the night table drawer flashed through her mind—it was close enough if she needed it.  Burying her head under the heavy quilt, she remained quiet and alert.
"Kristen? Where are you?" Logan bellowed.
Listening intently, she could hear the sound of another man’s voice. Their footsteps were getting closer.  When the door opened and light flooded the room she squeezed her eyes shut, huddling deeper under the blanket.
He ripped the blanket off of her. "What are you doing under there, Krissy? Come on out and say hi to Nick.”
His face was so close she could smell the mingled scent of marijuana and liquor. She blinked, her eyes making a gradual adjustment to the light.  His icy blue eyes stared at her, his long, dark blonde hair tickled her nose.
"Come on babe. Don't be rude!" He pulled her up, cramming his lips against hers.
Snapping out of her trancelike state, she cringed, holding back.  "What is he doing here?"  She blinked repeatedly, trying to bring the unfamiliar man lingering in the bedroom doorway into focus.

BIO
Karen Lynn, a native New Yorker has always loved writing poetry and short stories with intense characters struggling to find love and survive in a troubled world.   After years of working as a legal assistant in NYC and Miami and studying creative writing, Karen was able to pursue her dream of writing a novel.   A War of Hearts, is the first novel in her slightly dark, character driven, fast paced romantic suspense series. Full of unexpected twists, it explores the complexity of relationships, struggles with emotional turmoil and the inner strength needed to never give up. It is dedicated to everyone who has been consumed by the poison of obsessive love.

Karen currently lives in Portland, Oregon with her son. In the unusual moments when she’s not engrossed in writing or reading a romantic suspense novel, she enjoys watching riveting films, swimming, painting and hiking. But you can always find her listening to alternative rock & roll.